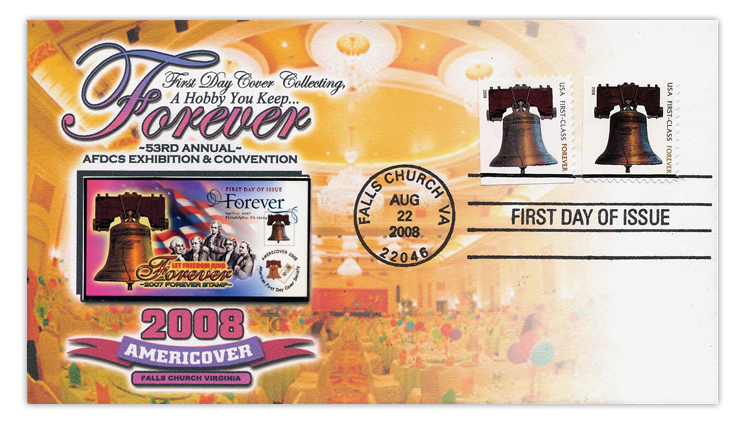 In First-Day Covers in the July 27 issue of Linn’s Stamp News, Lloyd de Vries examines the various factors that influence where a stamp will be issued in the United States. For example the 2008 Liberty Bell forever stamps weren’t issued at the Liberty Bel

The July 27 issue of Linn’s Stamp News just landed on the presses and goes in the mail to subscribers Monday, July 13. And if you subscribe to Linn’s digital edition, you’re at the head of the line with early access Saturday, July 11. While you wait for your issue to arrive in your mailbox, enjoy these three brief reviews of exclusive content available only to subscribers.

Lloyd de Vries, in First-Day Covers, opens with an intriguing question: “Why is Charleston, W.Va., the official first-day city for the 10 Fruits and Vegetables forever stamps issued July 17?” He goes on to discuss the response from the U.S. Postal Service before looking at the top three factors that guide the USPS in its selection process. At the head of the list are what de Vries calls “affinity events,” which have a direction connection to the stamp’s subject. This explains why the Arnold Palmer stamp was issued March 4 at a golf tournament in Florida. The other two factors are also important, but you’ll need to read the column to learn about them.

“During the late 19th and early 20th centuries, postage stamps were issued by five countries for use by foreign post offices in Crete,” writes Rick Miller in Stamps of Eastern Europe. These office abroad stamps were issued by Austria, France, Great Britain, Italy and Russia. Miller deftly explains the historical events that precipitated the issuance of these fascinating stamps. The stamps illustrated in the column also provide important context. Miller also provides a useful primer on how the stamps are listed in the Scott catalog. Reading the column might just spark a new collecting interest for you.

Guatemala issued its first airmail stamps May 20, 1929. As Thomas P. Myers explains in Stamps of Latin America, these first airmail issues “were created by adding uninspiring red overprints on the 15-peso black definitive of 1926 printed by the London firm of Waterlow and Sons.” Tipographia Nacional in Guatemala City applied the overprints to the stamps, which continued to be used into 1935. Myers provides production numbers that show the stamps are not scarce. And for you error collectors out there, double surcharges are known on the 15-centavo and 20c stamps, and an inverted surcharge exists on the 20c stamp.