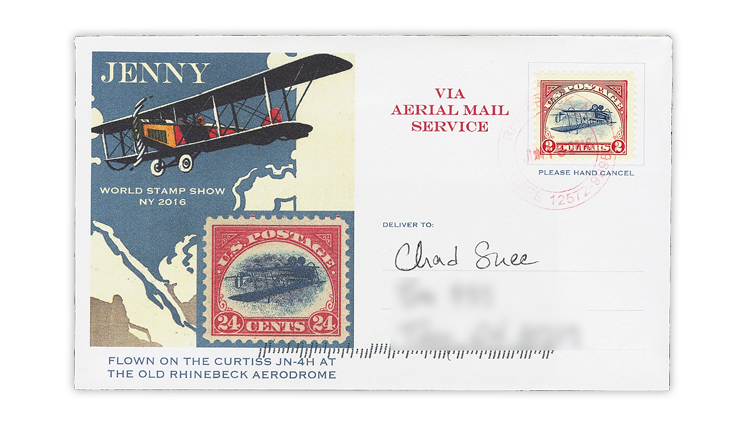 In Dollar-Sign Stamps in the May 2 issue of Linn’s Stamp News, Charles Snee showcases a pair of attractive World Stamp Show-NY 2016 souvenir covers featuring the United States 2013 $2 Jenny Invert stamp. This cover was flown aboard the Curtiss JN-4H “Jenn

The May 2 issue of Linn’s Stamp News just landed on the presses and goes in the mail to subscribers Monday, April 18. And if you subscribe to Linn’s digital edition, you’re at the head of the line with early access Saturday, April 16. While you wait for your issue to arrive in your mailbox, enjoy these three quick glimpses of exclusive content available only to subscribers.

World Stamp Show-NY 2016 was held May 28 to June 4, 2016, at the Javits Center in New York City. “Perhaps the most impressive object to greet attendees as they entered the venue was a restored Curtiss JN-4H ‘Jenny’ biplane,” writes Charles Snee in Dollar-Sign Stamps. As it turned out, a number of cacheted covers franked with the U.S. 2013 $2 Jenny Invert stamp were flown aboard this Jenny biplane shortly after the show concluded. One of the flown covers is illustrated here. “The cachet (decorative design) at left features a Curtiss Jenny biplane and a picture of the 1918 24¢ Jenny Invert from position 58 of the discovery pane of 100. This stamp, in the grade of extra fine-superb 95, is the highest graded example of the 24¢ Jenny Invert,” Snee explains. Snee reveals who created the cacheted envelopes and arranged for them to be flown. He also features another handsome $2 Jenny Invert souvenir cover created by a keen fan of U.S. dollar-sign stamps.

Influential philatelists who provide information on the internet

The Linn’s Most Influential Philatelists supplement to the March 21 issue motivated Computers and Stamps columnist William F. Sharpe, who recognized many of the names listed. “Several of these people have used the internet effectively to provide information to collectors. Many dealers and auctioneers mentioned in the list also have an active presence on the web,” Sharpe writes. Leading off Sharpe’s list is Graham Beck, who has published more than 100 entertaining videos about stamp collecting. Before diving into Beck’s videos, all of which are posted on YouTube, Sharpe recommends reading Beck’s article about the philatelic community. Other influential philatelists with a strong online presence are Linn’s First-Day Covers columnist Lloyd de Vries, who hosts the Virtual Stamp Club, and Nancy Clark, the former host of APS Stamp Talk, a weekly online radio show. Read the whole column to learn about the other two philatelists who caught Sharpe’s attention.

Linn’s regularly publishes three games to entertain readers: Trickies, a word scramble puzzle by Joe Kennedy; a word search puzzle by D.E. Rubin; and Philatelic Lexicon, a crossword puzzle by David Saks. In this week’s issue, Rubin hides the names of 22 characters associated with the Star Wars franchise that are illustrated on stamps issued by Great Britain. According to Rubin, “Great Britain’s Royal Mail has issued three sets of Star Wars stamps. This stamp trilogy began in 2015 (Scott 3435-3451) and continued in 2017 (3656-3664) and 2019 (3916-3927).” Sharpen your pencil and see if you can find all 22 words in Rubin’s puzzle.