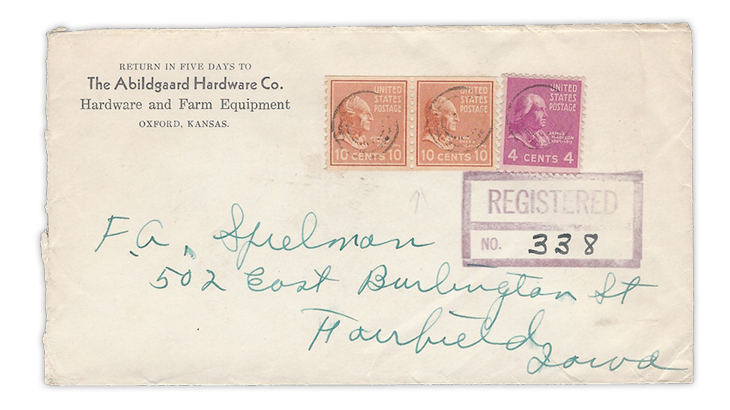 In Spotlight on Philately in the Feb. 15 issue of Linn’s Stamp News, Ken Lawrence introduces readers to the postal history of the Presidential series coil stamps issued in 1939.

The Feb. 15 monthly issue of Linn’s Stamp News just landed on the presses and goes in the mail to subscribers Monday, Feb. 1. And if you subscribe to Linn’s digital edition, you’re at the head of the line with early access Saturday, Jan. 30. While you wait for your issue to arrive in your mailbox, enjoy these three capsule summaries of exclusive content available only to subscribers.

In 1938 the United States Post Office Department launched the popular Presidential series of definitive stamps featuring the nation’s chief executives. One year later, the series grew to include coil stamps in nine denominations. Ken Lawrence, in Spotlight on Philately, explains how the coils were produced and distributed, as well as how they were used in vending machines. He summarizes philatelic sales of the stamps, which made it easier for collectors to buy them in smaller quantities. Collectors of postal history will want to pay particular attention to the sections focused on how the stamps were used on mail. Lawrence provides useful suggestions for collecting covers and highlights some of the typical uses that are not elusive. Lawrence explores in detail the challenge of collecting the 10¢ Tyler coil on covers sent to uncommon overseas destinations such as Midway Island and Wake Island. He concludes with a look at the 1½¢ Martha Washington and 6¢ John Quincy Adams coil stamps, both of which were late issues in the series. If you are a fan of the Prexies, be sure to read the entire column and bookmark it for future reference.

A deeper dive into the Penny Reds

In Great Britain Philately in the Jan. 18 issue of Linn’s, Matthew Healey “surveyed the range of 19th-century British stamps known collectively as the Penny Reds.” This month he takes an even closer look at the popular Penny Red stamps of Great Britain featuring a portrait of Queen Victoria. He opens with a bracing dose of philatelic perspective that allows the collector to better appreciate the myriad subtle features of these stamps: “Sorting Penny Reds by attributes such as die type, alphabet, paper color, cancellation type, watermark, perf gauge or ink shade allows a collector to place a given stamp on the time line of the Penny Red’s evolution over its four-decade life span. Nearly every aspect of philatelic study can be found in the Penny Reds, affording anyone who chooses to specialize in them a lifetime of fascination.” Healey begins with a review of the three major groups of Penny Reds: imperforate, perforated with stars in the top corners and perforated with plate position letters in all four corners. Important reference works, including the vast online resources of the Great Britain Philatelic Society, are introduced to make to process of plating a Penny Red easier. Sometimes the results are inconclusive, as Healey shows with a cover in his collection franked with two imperforate Penny Red stamps. All this and much more await in Healey’s fascinating exploration.

In 2005 the U.S. Postal Service issued four 37¢ Let’s Dance commemorative stamps featuring four different Latin dance styles. The stamps were issued in a pane of 20 that had descriptive text printed on the back of the liner paper. Joe Brockert, in Philatelic Backstory, explains that the back printing, or verso text, “had some incorrect accent marks in the Spanish-language text behind some of the stamps.” Because of text repetition, there turned out to be more than 30 text miscues on the back of each pane of 20. Brockert was not directly involved with the production of the Let’s Dance stamps, but he was able to look at the finished product before examples were stored in the Postal Service’s archive vault. And that’s when he noticed some odd features such as capital letters appearing in the middle of words. Brockert then reviews how the Postal Service addressed the problem, which included the complete recall of the errant panes and their destruction at a cost of $172,000. He then suggests three factors that set the stage for the mistakes on the Let’s Dance issue. You’ll have to read the column to discover what they are.