Inside Linn’s: The fascinating backstory on Hamilton and Jackson card proofs 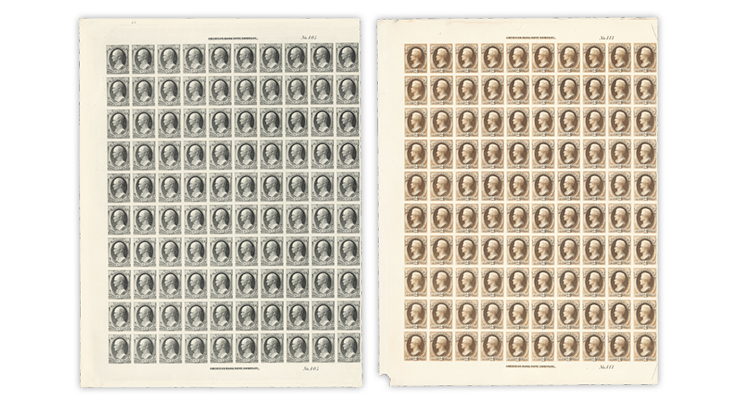 In the Sept. 23 issue of Linn’s Stamp News, Essays and Proofs columnist James E. Lee pulls the curtain back on the history of the 30¢ Alexander Hamilton and 2¢ Andrew Jackson card proof sheets originally printed by the American Bank Note Co.

The Sept. 23 issue of Linn’s Stamp News just landed on the presses and goes in the mail to subscribers Monday, Sept. 9. And if you subscribe to Linn’s digital edition, you’re at the head of the line with early access Saturday, Sept. 7. Here are three brief glimpses of the content while you wait for your issue to arrive.

The fascinating backstory on Hamilton and Jackson card proofs

James E. Lee, in Essays and Proofs, traces the history of two key emissions from the presses of the American Bank Note Co.: the card proof sheets of 100 of the 30¢ Alexander Hamilton and the 2¢ Andrew Jackson. Both sheets passed through the hands of well-known collectors and dealers before Lee acquired them in two separate auctions in 2001 and 2004. Read the entire column to learn the fate of both sheets.

1935 was a busy year for overprints from Nicaragua

Of the more than 60 stamps that Nicaragua issued in 1935, not one of them featured a new design. As Thomas P. Myers recounts in Stamps of Latin America, all of these stamps were overprints, and some “were printed for ordinary postage, while others were created for airmail, Official use or postal tax.” For added fun and challenge, Myers points out that errors such as inverted overprints exist, and print quantities for some of the stamps were quite low.

In each weekly issue of Linn’s, either E. Rawolik VI or E. Rawolik VII dissects the contents of a stamp mixture offered to collectors. E. Rawolik is a pseudonym that is also the word “kiloware” (a stamp mixture) spelled backward. This week, E. Rawolik VI takes a tour of a small sample of stamps from a worldwide assortment. Rawolik favorably compares this mixture with one from the same dealer that was reviewed in KTP one year ago.