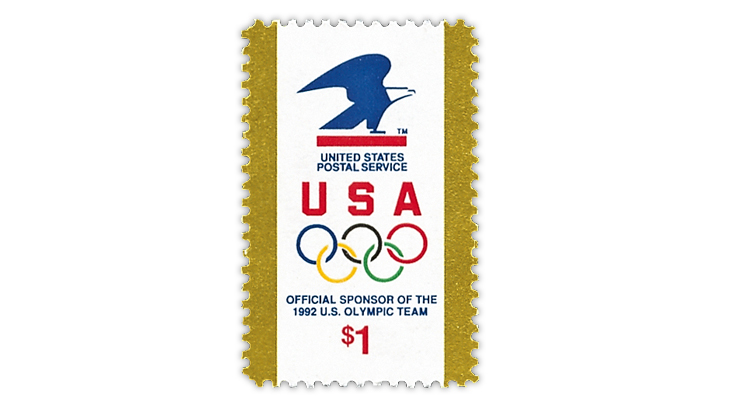 In 1991 the United States Postal Service issued a commemorative-size $1 definitive that trumpeted the agency’s sponsorship of the upcoming 1992 Olympic Games. Dollar-Sign Stamps columnist Charles Snee takes a closer look at the stamp in the Dec. 6 issue o

The Dec. 6 issue of Linn’s Stamp News just landed on the presses and goes in the mail to subscribers Monday, Nov. 22. And if you subscribe to Linn’s digital edition, you’re at the head of the line with early access Saturday, Nov. 20. While you wait for your issue to arrive in your mailbox, enjoy these three quick glimpses of exclusive content available only to subscribers.

In Dollar-Sign Stamps, Charles Snee revisits the $1 Olympics definitive stamp that the United States Postal Service issued Sept. 29, 1991, to show its support of the 1992 Winter and Summer Olympic Games held in Albertville, France, and Barcelona, Spain, respectively. Snee last wrote about the stamp in his column in the Aug. 17, 2015, issue of Linn’s Stamp News. This time around, he reviews some of the challenges the USPS faced when designing the stamp. Most of these obstacles were the direct result of strict guidelines put in place by the U.S. Olympic Committee that centered around the Olympic rings logo. “Because of these requirements, a number of preliminary designs in definitive-stamp size ultimately proved unsuitable for use,” Snee explains. Snee also recalls the unfavorable editorial reaction of Linn’s to the $1 Olympics and shares an interesting use of the stamp on a 1992 cover mailed from Elmira, N.Y., to Toronto, Ontario, Canada.

Entry form makes it easier to use spreadsheets for stamps

Digital spreadsheets are a handy way to organize data about the stamps in your collection. As William F. Sharpe explains in Computers and Stamps, data is typically entered into a spreadsheet one cell at a time, which can be time consuming. “An easier method of entering data is to have a form displayed that will assist the user in entering the correct information,” Sharpe writes. Two popular programs, Microsoft Excel and LibreOffice Calc, provide entry forms, and Sharpe methodically explains how to access and populate the forms in both programs. Pay close attention to the images and descriptions Sharpe provides to get the most out of using the entry forms.

Puzzle: searching for stamps from Ukraine

Linn’s regularly publishes three games to entertain readers: Trickies, a word scramble puzzle by Joe Kennedy; a word search puzzle by D.E. Rubin; and Philatelic Lexicon, a crossword puzzle by David Saks. In this week’s issue, Rubin sends readers on the hunt for 28 stamps from the eastern European nation of Ukraine. “Ukraine’s stamps feature a wide variety of topics: fauna, flora, culture, traditions, famous people and more,” Rubin writes. “A 1997 40-kopeck stamp shows Princess Olha wearing a fur coat and with a falcon perched on her shoulder. Also known as Olga of Kyiv, she ruled in the 10th century as a regent for her young son.” The stamp featuring Princess Olha is pictured with the puzzle, and her name is hidden in the grid. Have fun searching for the remaining 27 stamps.