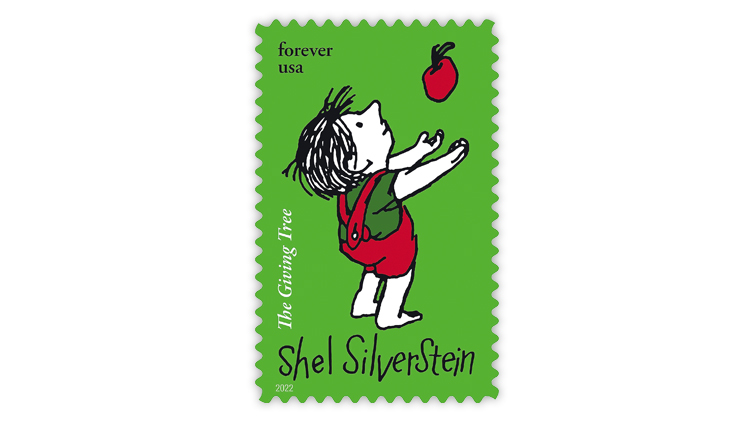 The United States Postal Service announced April 8 as the first day of issue for its Shel Silverstein commemorative stamp.

The stamp will be issued in Chicago, Ill., but ceremony details have not yet been announced.

Author and illustrator Shel Silverstein (1930-1999) was born and raised in Chicago.

The forever (58¢) commemorative stamp honoring Silverstein will be available in a pressure-sensitive adhesive pane of 20 stamps. Derry Noyes designed the stamp, and it will be printed by offset by Ashton Potter (USA) Ltd. in a run of 20 million.

The stamp design features a boy extending his arms to catch a falling apple. A version of this image appears on the cover of Silverstein’s classic children’s book The Giving Tree, which describes the relationship between a boy and a tree devoted unconditionally to the boy’s wants.

The USPS also released the design of the special dedication postmark for this issue. The pictorial postmark is a depiction of Silverstein’s signature.

The stamps will go on sale nationwide April 8, and collectors will have 120 days after that date to obtain the first-day-of-issue postmarks.