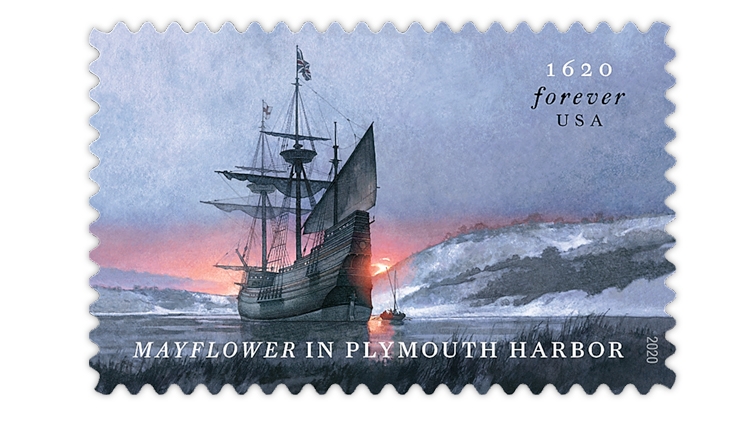 The Mayflower in Plymouth Harbor stamp commemorating the 400th anniversary of the voyage of the Mayflower to America will be issued Sept. 17 in Plymouth, Mass. The United States Postal Service formally announced issue dates and locations for six 2020 sta

All of the stamps in the April 21 announcement are nondenominated (55¢) forever stamps.

The five-stamp set titled Enjoy the Great Outdoors will be issued June 13 in Incline Village, Nev., on the north shore of Lake Tahoe.

The set of four stamps illustrating aspects of Hip Hop culture is planned for a July 1 release date in New York City.

On July 17 the Postal Service will issue its Fruits and Veggies set of 10 in a double-sided pane (booklet) of 20, with Charleston, W.Va., as the designated issuing location.

The 10 stamps commemorating artist Ruth Asawa will be issued Aug. 13 in San Francisco, Calif., where Asawa lived and worked for much of her life.

The four Thank You definitive stamps in a double-sided pane of 20 are planned for an Aug. 21 release date in Hartford, Conn.

Seneca Falls, N.Y., which hosted the first convention for women’s rights in 1848, is the designated location for the 19th Amendment: Women Vote forever stamp, which will be issued Aug. 26.

And appropriately, Plymouth, Mass., has been named as the issuing location for the Mayflower in Plymouth Harbor stamp celebrating the 400th anniversary of the English ship’s voyage to the New World. The stamp will be issued Sept. 17.

This new information will be updated in Linn’s United States Stamp Program.

In its announcement of these dates and locations, the Postal Service also advised that its first-day ceremony plans are still in limbo.

“The Postal Service is following social distancing guidance from the Centers for Disease Control and Prevention and public health departments to determine if dedication ceremonies will be held for these stamps. The ability to hold a ceremony will depend on the federal, state and local health guidelines in place at the time.”

The Thank You stamps are tentatively planned for release at the Great American Stamp Show sponsored by the American Philatelic Society, the American Topical Association and the American First Day Cover Society.

The annual summer show is scheduled for Aug. 20-23 this year at the Connecticut Convention Center in Hartford.