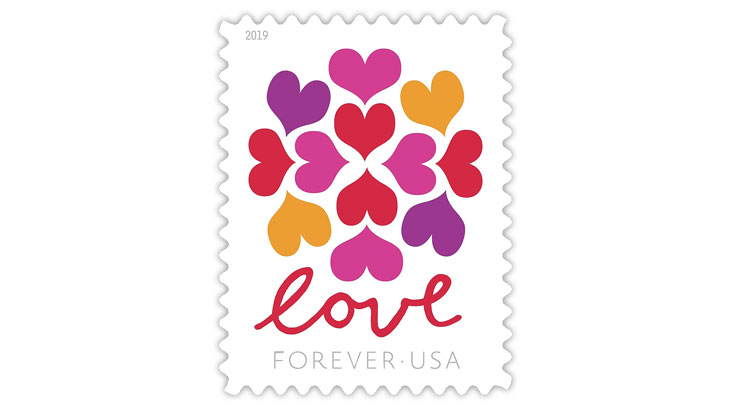 The United States Hearts Blossom Love stamp will be issued Jan. 10 in a pane of 20. A first-day ceremony in Puerto Rico is planned at an art museum for the new forever stamp. 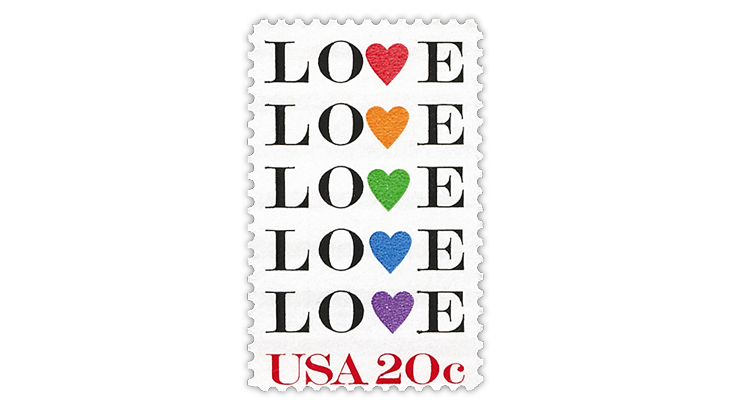 Hearts have been a popular design element on many U.S. Love stamps. This 20¢ stamp issued Jan. 31, 1984, uses colorful hearts to replace the letter V in the word LOVE. 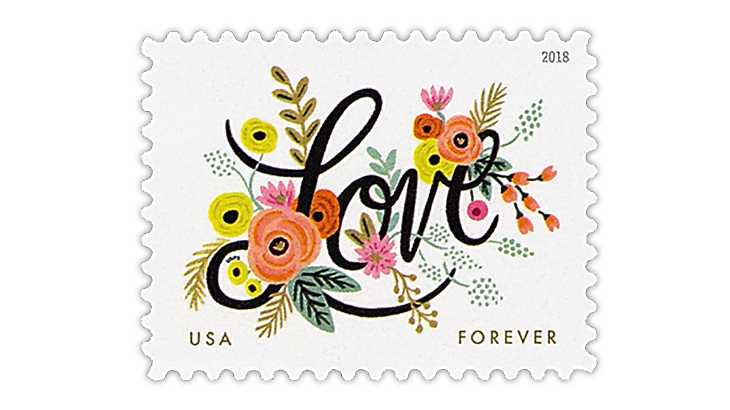 Flowers are abundant on the Love forever stamp issued Jan. 18, 2018. 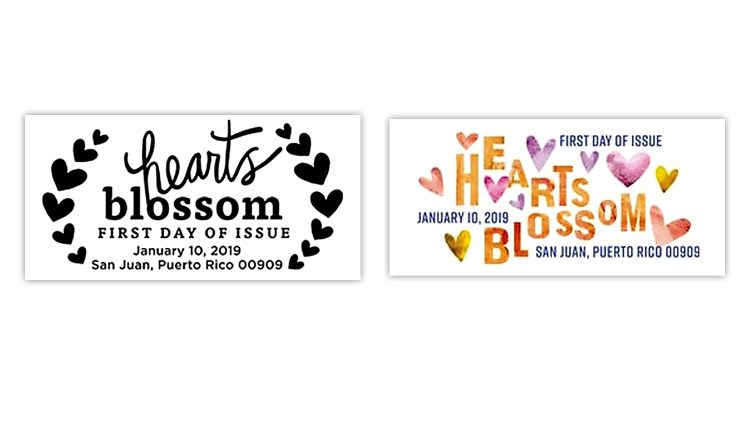 Two different pictorial first-day postmarks have been prepared for the 2019 Love forever stamp, one in black and the other in color.
Previous
Next

Hearts and flowers have been popular themes on United States Love stamps, sometimes appearing individually and occasionally presented together.

The name bestowed by the U.S. Postal Service on its latest Love stamp, “Hearts Blossom,” lets you know that both of these symbols of affection are present on the new issue.

The nondenominated (50¢) forever stamp will be issued Jan. 10. The central design features a gathering of 12 colorful hearts in red, orange, purple and pink arranged in a vaguely floral pattern. The word “Love” is spelled out below the hearts in red lowercase cursive lettering.

“Forever” and “USA” are inscribed below the design in pale gray letters.

The design was created by USPS art director Antonio Alcala.

Banknote Corporation of America printed 300 million stamps by offset lithography to be sold in panes of 20.

The stamp is the first U.S. issue for 2019. The 50¢ cost of the stamp will increase to 55¢ on Jan. 27. The forever stamp will continue to fulfill the first-class letter rate after that date.

The ceremony is free and open to the public, according to the Postal Service, but anyone wishing to attend the event is encouraged to RSVP online here. The stamp event can be viewed live on the USPS Facebook site.

The stamp will be dedicated by USPS vice president of network operations Robert Cintron.

The first U.S. Love stamp was issued Jan. 26, 1973, with an 8¢ denomination and a pop-art design that featured Robert Indiana’s stacked “LOVE” composition in bold primary colors (Scott 1475). Nearly a decade passed before another Love stamp was offered, a 20¢ stamp spelling out the word “LOVE” with delicate flowers and leaves (Scott 1951-1951A). The stamp was issued Feb. 1, 1982.

The floral design gave way to a design featuring hearts in 1984, with a new 20¢ Love stamp repeating the word “LOVE” five times (Scott 2072). Five hearts of different colors replace the letter V in the five instances of the word.

Over the past 35 years, new Love stamps have been issued annually most years, occasionally with a 2-ounce rate stamp sharing a similar theme as the letter-rate stamp.

Last year’s Love stamp was issued Jan. 18, 2018, as a nondenominated (49¢) forever stamp. It returned to the floral theme with the word “Love” spelled out in cursive script, immersed among flowers and plant stems that sprout from the letters (Scott 5255). Florida-based artist (and stamp collector) Anna Bond created the illustration, working with USPS art director Greg Breeding.

The new Hearts Blossom Love stamp will be offered in panes of 20 at U.S. post offices and by mail order through Stamp Fulfillment Services. No announcement was made regarding the possible availability of press sheets for this issue. Beginning last year, the Postal Service has withheld information about first-day covers and press sheets until the stamp’s actual day of issue.

However, the Postal Service has revealed designs for two different first-day postmarks for the new stamp. Both postmarks include the name of the issue, Hearts Blossom, and multiple heart shapes (13 on the black postmark and 10 on the color postmark). Presumably, the new postmarks will appear on USPS-prepared first-day covers for sale to the public.