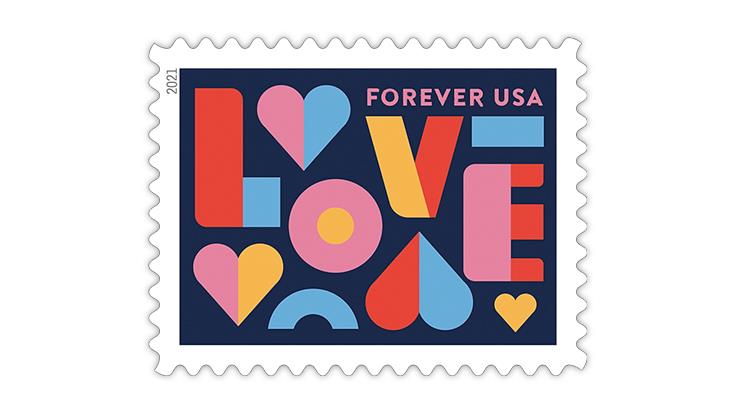 The United States Postal Service will issue a new Love stamp on Jan. 14. The nondenominated (55¢) forever stamp will be offered in a pane of 20. 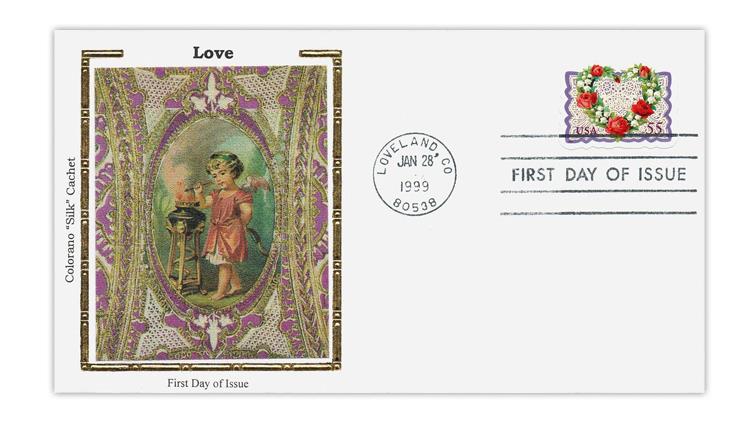 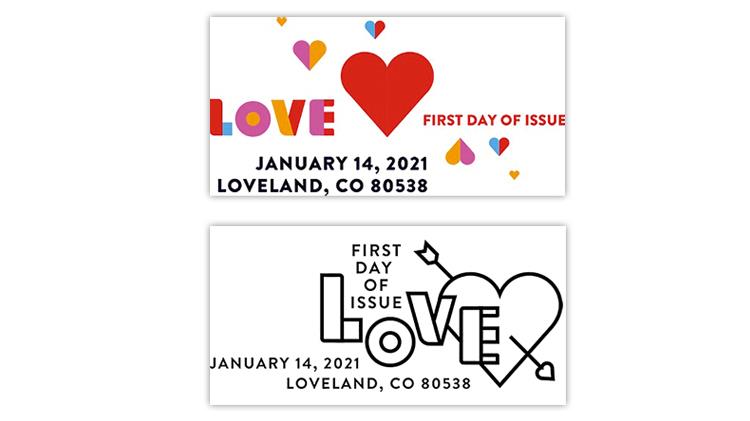 The black and multicolor pictorial first-day cancels for the new Love forever stamp both reflect elements of the stamp illustration.
Previous
Next

The USPS is referring to the new stamp as Love 2021. It is the first U.S. stamp to be issued this year, according to a schedule of issue dates recently released by the Postal Service.

Graphics on the new horizontally oriented stamp spell out the word “Love” in bicolor letters and include multiple hearts, a blue semicircle and a rectangle, all arranged against a dark blue background.

The illustration was created by Bailey Sullivan, who also designed the stamp and its typography. USPS art director Greg Breeding oversaw the project.

The new stamp features “a colorful and light-hearted digital illustration,” according to the Postal Service.

“The playful, graphic lettering on these stamps will add color and whimsy to your mailings, making it clear that thought and care have been lavished on the message, inside and out.”

The stamp is the latest in a long series of U.S. Love stamps that in recent years have been released at a rate of one per year.

The first U.S. Love stamp was a single 8¢ issue in 1973 that reproduced a well-known design by Robert Indiana in bold shades of red, blue and green (Scott 1475). The Indiana design stacked the uppercase letters L and a tilted O above the letters V and E into a compact space placed on the left side of the stamp design.

Over the years, Love stamps have displayed a variety of graphic elements from lacy Valentines to computer-designed hearts and whimsical floral themes. Most of the Love stamps have been issued in January or early February to provide mailers with the option of using the new stamp when sending Valentine’s Day greetings.

The new Love 2021 stamp is offset-printed with microprinting within the design, according to the Postal Service, and offered in a pane of 20.

Loveland, Colo., has been designated as the official city of issue, but because of the COVID-19 pandemic, there are no plans for a first-day ceremony open to public attendance.

Instead the Postal Service will host a first-day event online on its Facebook and Twitter social media pages.

Because of its name, Loveland has been a popular choice for postmarking Love stamp issues with either official or unofficial first-day cancels.

Two pictorial first-day cancels for the new Love stamp have been revealed by the Postal Service, one in black and the other in colors similar to those used to print the stamp.

The black postmark shows a heart with an arrow going through it and letters spelling out “LOVE” in a pattern similar to the postage stamp design.