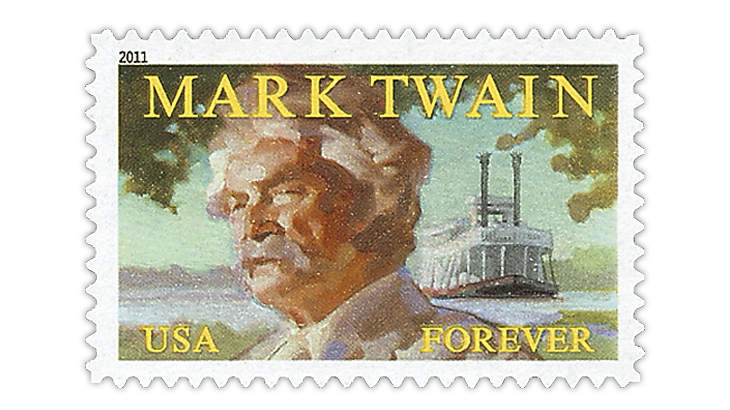 The cartoon caption contest image for January is the 2011 Literary Arts stamp honoring Mark Twain. Entries must be received by Jan. 24 for a chance to win a prize. The rules are in the accompanying article.

Twain (the pen name of Samuel Langhorne Clemens. 1835-1910) was an equal opportunity critic of the political establishment.

For example, he said in his autobiography, “The political and commercial morals of the United States are not merely food for laughter, they are an entire banquet.”

In a 1945 essay “The Privilege of the Grave,” he observed: “All large political doctrines are rich in difficult problems — problems that are quite above the average citizen’s reach. And that is not strange, since they are also above the reach of the ablest minds in the country.”

In this realm, as in so many others, Twain was rich in cynicism with a well-developed ability to skewer people and institutions.

As we look toward the prospect of wall-to-wall politics in 2020, let’s use the 2011 Mark Twain stamp as the cartoon caption contest subject for January.

This gives you an opportunity to put yourself in Twain’s white suit to apply his and your caustic wit to the modern era.

You are not limited to politics. There are many subjects equally deserving of biting observations: postal policy, modern electronics and their use, sports as big business, and dozens of other elements of modern life.

For each winner, the prize will be a 13-week subscription to Linn’s (a new subscription or an extension). Entries must reach me no later than Jan. 24.