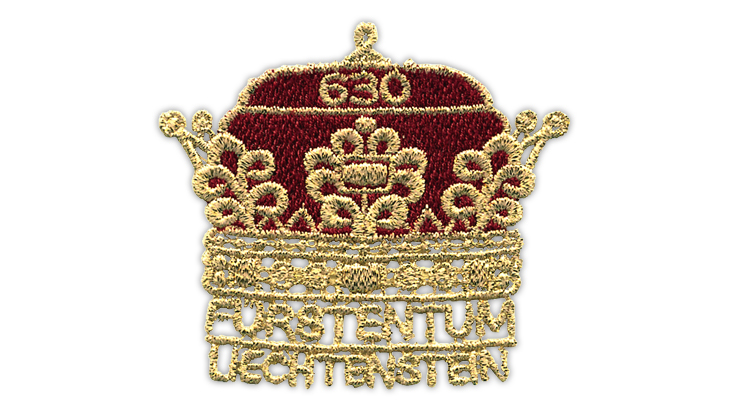 This embroidered stamp from Liechtenstein, though not shown on the program, was described in the Dec. 20 episode of Jeopardy!

Stamps of the world were featured on the popular television game show Jeopardy! Dec. 20, 2019. The category “World Stamp News” appeared in the first Jeopardy round.

Following the answer-and-question format of the show, the category contained five clues about worldwide postage stamps, each read aloud by host Alex Trebek. The contestants competed to respond to each statement with an appropriate question.

The first philatelic clue, valued at $200, read, “A 2018 Swiss stamp has a pot of melted cheese to honor this national dish.”

Smith was the first to ring in and correctly respond with “What is fondue?”

However, he responded with a wrong guess on the next clue, for $400, which described 2019 stamps from the United Kingdom commemorating the 500th anniversary of an artist’s death. Yuan then rang in to correctly identify Leonardo da Vinci.

The $600 clue was the only one to show an image of a stamp, a 1996 20-ngultrum issue from Bhutan featuring a tall scraggly creature.

What was it? A yeti, Smith responded correctly.

At the $800 level, Marinello-Fisher rang in for a clue that read, “Hallelujah! In 2019 Canada issued stamps honoring this Canadian singer-songwriter who passed in 2016.”

“Who is Cohen?” she responded, correctly identifying Leonard Cohen as the subject.

The final clue in the round, valued at $1,000, stated: “In 2019 this small Central European country honored its 300th birthday with a souvenir embroidered stamp of the Princely Hat.”

Though the unusual issue was not pictured on the show, Smith responded by correctly identifying Liechtenstein.

At the end of the game, Smith retained his champion’s title and enjoyed a substantial $25,000 payday for his effort.

Now in its 36th season, Jeopardy! is produced by Sony Pictures Television.