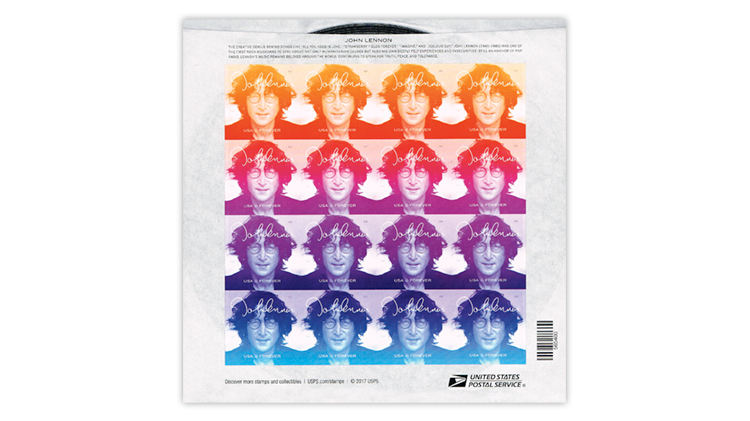 A full pane of the 2018 John Lennon forever commemorative stamps with all die cuts missing. Linn’s Stamp News has received multiple reports of the imperforate errors being sold at post offices in various cities.

One such pane was examined by Linn’s U.S. Stamp Notes columnist John M. Hotchner, a recognized stamp expertizer. Hotchner confirmed that the pane he inspected, which is pictured here, is fully imperforate.

Stamp panes are described as imperforate if they are missing the perforations or die cuts that normally separate individual stamps.

The Lennon panes were normally processed with die cuts that separate the 16 stamps from each other and create a slender gutter or margin between each stamp as well.

Those separating die cuts are absent on the pane examined by Hotchner.

For several years, the United States Postal Service offered uncut press sheets of commemorative stamps with no die cuts that were available for purchase.

This practice ended in 2016. Prior to that, the press sheets issued without die cuts included several for Music Icons series commemoratives, such as the 2013 Johnny Cash forever stamp (Scott 4789) and the 2015 Elvis Presley forever stamp (5009).

The John Lennon forever stamps are part of the same commemorative series, but because they were issued in 2018, all were intentionally issued only with die cuts, including the press sheets sold by USPS Stamp Fulfillment Services.

The lithographed Lennon stamps were printed and processed by USPS contract printer Banknote Corporation of America. Because the pane is printed with gradient rainbow colors extending from the top of the pane to the bottom, there are four different major color varieties of the same design.

The Postal Service announced a print quantity of 40 million Lennon stamps (2.5 million panes of 16) when the stamps were issued Sept. 7, 2018.

Scott catalog editor Charles Snee was notified of the discovery reports and the results of Hotchner’s examination, and anticipates that an error listing will be added to Vol. 1A of the 2020 Scott Standard Postage Stamp Catalogue when it is published in April.

Four imperforate Lennon panes were purchased “shortly before Christmas” by Jake Rohe at the post office in Ankeny, Iowa. Rohe told Linn’s that since the four panes he bought were all imperforate, he would speculate that there could have been others.

Robert Murrin told Linn’s that he purchased 16 imperforate panes at the main post office in St. Petersburg, Fla. Two of the error panes he bought are slightly damaged.

An additional report that reached Linn’s suggests that errors were also purchased in a New York post office in December.

The John Lennon forever stamp pane is still offered for sale at many local post offices and through USPS Stamp Fulfillment Services.