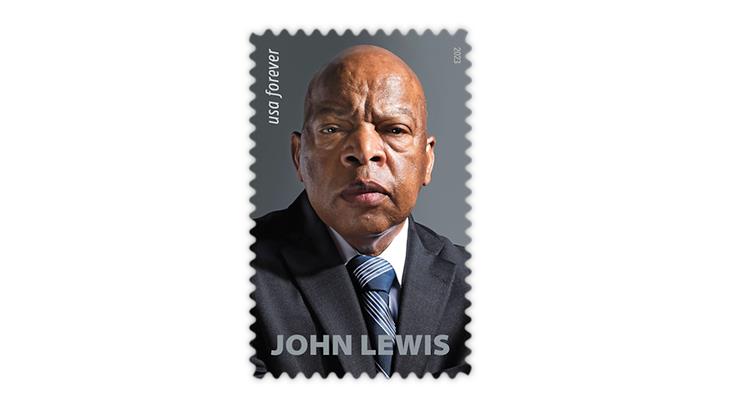 The life and legacy of civil rights leader and U.S. Rep. John Lewis will be honored on a commemorative forever stamp. The stamp features a photograph of Lewis that appeared in the Aug. 26, 2013, issue of Time magazine. 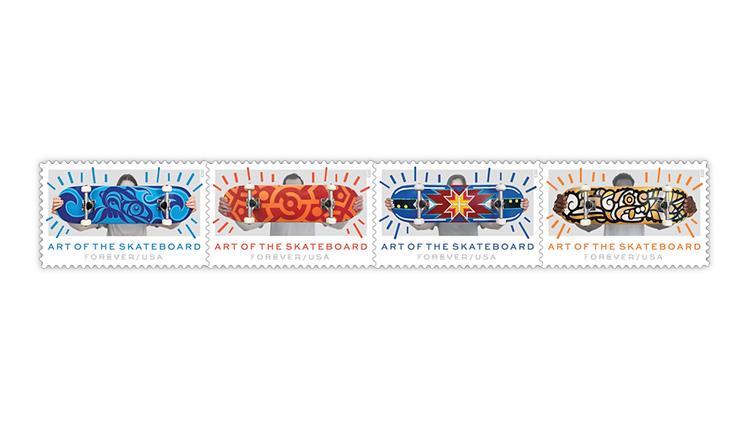 Four forever stamps in an Art of the Skateboard set feature vibrant artwork on the underside of skateboards by four U.S. artists. Some of the designs reflect the indigenous cultures of the artists. 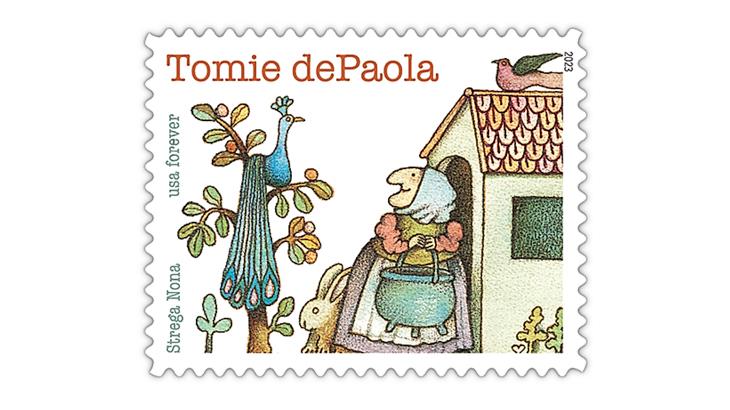 Prolific children’s book author and illustrator Tomie dePaola will be commemorated on a forever stamp. The design is from the cover of his 1975 book titled Strega Nona, which means “Grandma Witch.” 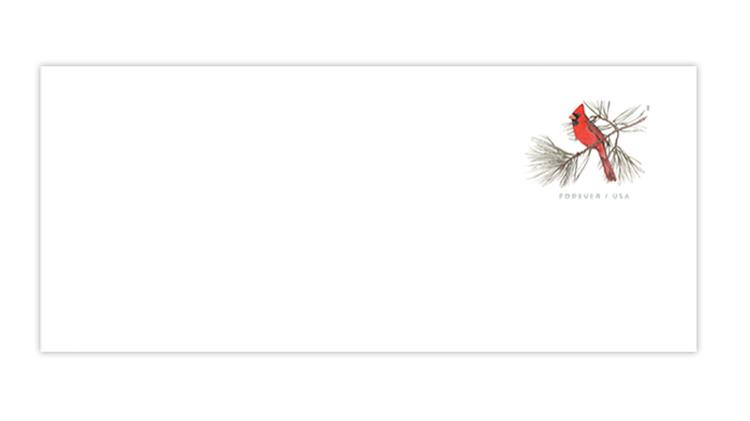 The northern cardinal, one of the most beloved and popular songbirds native to North America, will grace a stamped envelope in 2023. The stamp design is from an illustration by Kandis Vermeer Phillips. 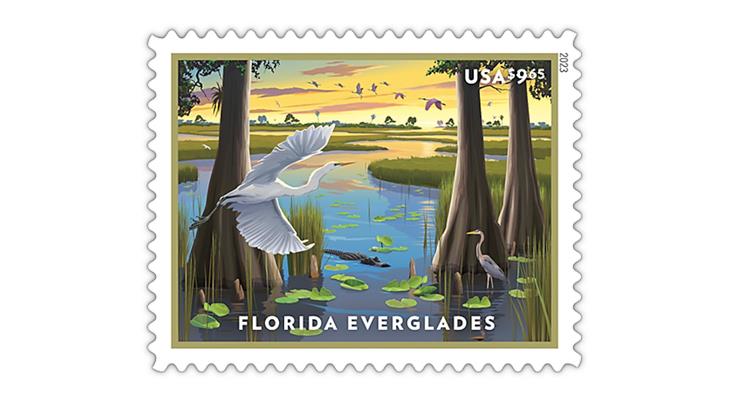 The United States Postal Service will celebrate the Florida Everglades with a Priority Mail stamp to be issued Jan. 22 in Homestead, Fla., without a ceremony. 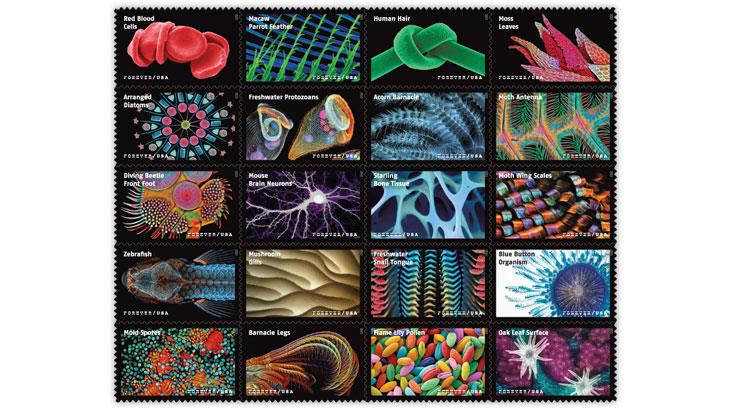 The 20 stamps on the Life Magnified pane feature images that capture details undetectable by the naked eye. The USPS said these images hold scientific significance in addition to their status as works of art. 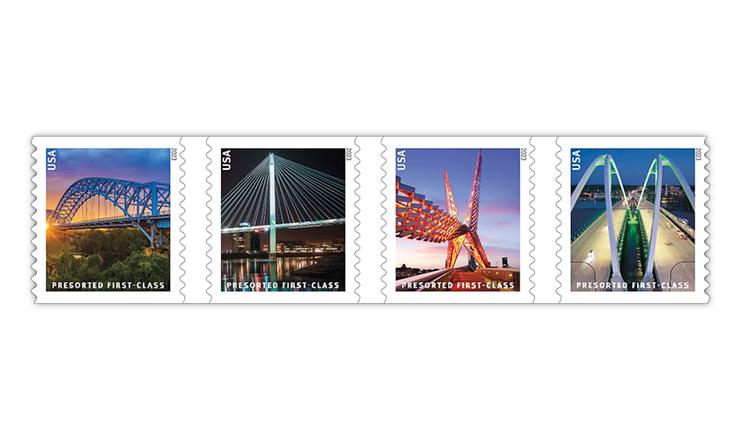 The U.S. Postal Service will issue four new Presorted First-Class Mail stamps featuring photographs of bridges. The stamps are available for purchase by bulk mail users in coils of 3,000 and 10,000.
Previous
Next

The United States Postal Service announced Dec. 13 a number of additions to its 2023 U.S. stamp program. The postal agency said that this is a partial list, and that the stamp designs are preliminary and subject to change.

“Spanning some 2 million acres in southern Florida, from Lake Okeechobee to Florida Bay, the Everglades is one of the largest wetlands in the world and the most significant breeding ground for tropical wading birds in North America,” the USPS said.

The stamp shows a sunset view of a saw grass marsh from the edge of a cypress dome. Art director Greg Breeding designed the stamp using a digital illustration by Dan Cosgrove.

John Lewis The life and legacy of civil rights leader and U.S. Rep. John Lewis (1940-2020) will be honored on a commemorative forever stamp.

Lewis spent more than 30 years in Congress “steadfastly defending and building on key civil rights gains that he had helped achieve in the 1960s,” the USPS said, further noting that the congressman remained resolute in his commitment to what he called “good trouble” even in the face of hatred, violence and some 45 arrests.

“The bold artwork on a skateboard deck is often as eye-catching and individualistic as a skater’s most breathtaking moves,” the USPS said.

Di’Orr Greenwood of Arizona represented her Navajo culture with a design featuring eagle feathers and the colors of the rising or setting sun. Artist MazPaz (Federico Frum), born in Colombia and raised in Washington, D.C., painted the stylized jaguar shown on the remaining stamp design.

Art director Noyes designed the stamp with dePaola’s original artwork from the cover of his 1975 book Strega Nona.

The USPS said that the humorous book is set in southern Italy and “focuses on Strega Nona, ‘Grandma Witch,’ who uses magic to help with matters of the heart and to cure her neighbors’ ills.”

Northern Cardinal One of the most beloved and popular songbirds native to North America, the northern cardinal will grace a stamped envelope in 2023.

Bridges The U.S. Postal Service will feature bridges on four new presorted first-class mail stamps available for purchase by bulk mail users in coils of 3,000 and 10,000.

Life Magnified The USPS said the stamps on this pane of 20 “reveal life on Earth like many have never seen it.”

By using microscopes and “highly specialized photographic techniques,” the 20 different images capture details that cannot be seen by the naked eye, the Postal Service said.

“The images show the phenomena of life in exquisitely fine detail,” the USPS said. “While stunning on their own as works of art, these images also hold scientific significance.”

Linn’s Stamp News will report further details about these stamps as they become available.