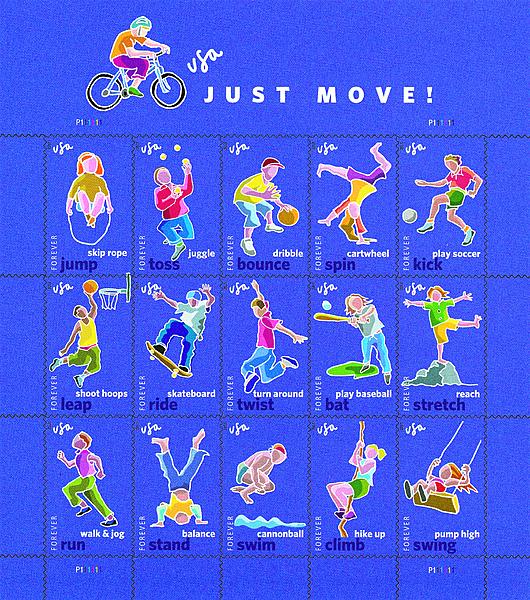 Preliminary artwork for the Just Move pane of 15 stamps. Originally planned for 2013, the issue was never released because of concerns about three of the stamp designs.

United States stamps promoting physical activity for youngsters, printed for 2013 and subsequently blocked from release because of design concerns, are still stuck in storage.

Linn’s Washington Correspondent Bill McAllister first reported in the Oct. 21, 2013, issue that the Just Move pane of 15 stamps was withdrawn before the stamps were issued because of complaints about how activities are depicted on three of the stamps.

McAllister reported that according to a Postal Service source: “A swimmer doing a cannonball dive was deemed unsafe because some swimming pools do not allow such dives. There were also objections to designs showing a youngster doing a headstand without a helmet and a skateboarder who was not wearing knee pads.”

The 15 different stamps, designed by Eli Noyes, each illustrate a youngster involved in physical activity, with captions such as “swim,” “run,” “climb,” “stretch” and so on.

The design concerns reportedly were expressed by representatives of the President’s Council on Fitness, Sports and Nutrition; and Let’s Move, the federal government initiative promoting first lady Michelle Obama’s efforts to encourage children to engage in physical activities.

McAllister’s 2013 article suggested that the stamps were about to be destroyed, but USPS spokesman Mark Saunders told Linn’s in early December that the stamps are still around, stored in “a Stamp Services facility in the Midwest,” presumably the USPS Stamp Fulfillment Services division in the underground Hunt Midwest Subtropolis complex in Kansas City, Mo.

In an update published in the Nov. 11, 2013, Linn’s, McAllister reported that 30 million Just Move stamps had been printed by Ashton Potter in New York, at a cost of about $90,000.

In an article by Marisa Schultz published in the Nov. 29 New York Post, that printing cost was reported to be $146,250, and the quantity was “about 45 million.”

Although the printed stamps haven’t been shredded, it is unlikely they ever will be issued.

“We are continuing to develop plans regarding a fitness-themed stamp series,” Saunders said. “More information will be provided at a later date.”

The Postal Service did not say why the stamps have not been destroyed.