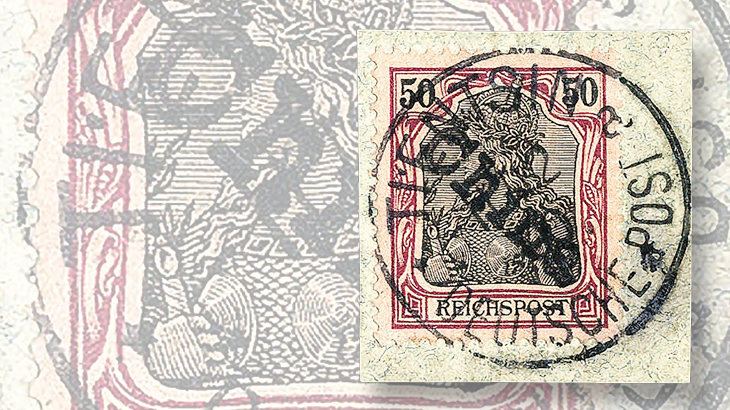 Wurttembergisches Auktionhaus offered a very scarce overprint variety from the German post office in China at its September sale in Stuttgart. The accidentally diagonal handstamped marking sold for $40,200. 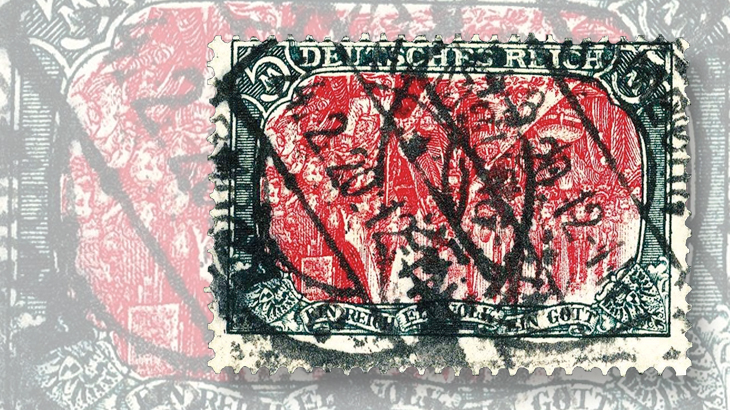 An inverted-center error from World War I-era Germany, described as one of the greatest rarities in German philately, sold for $40,200 at a September sale in Stuttgart conducted by Wurttembergisches Auktionhaus.
Previous
Next

A rare inverted-center error from Germany was one of the top sellers in a Wurttembergisches Auktionhaus sale Sept. 11-12 in Stuttgart, Germany.

The 5-mark stamp was issued before and during World War I, showing a red vignette of Kaiser Wilhelm II speaking before a crowd, surrounded by a fancy slate-colored frame. Some 27 of the stamps with inverted centers (Scott 95a) were discovered in the town of Stralsund; these were bought up by collectors.

An additional quantity surfaced in Hamburg where, unrecognized, they were used up on commercial mail. Only two sound, used examples from Hamburg are thought to have survived.

A used example in this sale, centered rather high within its perforations and canceled somewhat heavily with two strikes of a Hamburg circular datestamp, was described as otherwise faultless and “one of the greatest rarities in German philately.” Including the 20 percent buyer’s premium levied by Wurttembergisches, it sold for the equivalent of about $40,200.

The same price was obtained for a very scarce overprint variety from the German post office in China.

In 1900, provisional handstamps reading “China” were applied diagonally, reading up, to small quantities of German definitive stamps for use in the German Empire’s concession in the port of Tientsin (modern Tianjin). The number of 50-pfennig stamps receiving this handstamp was small; the number receiving the handstamp diagonally reading down rather than up (variety of German Offices in China Scott 22) was even smaller.

The practically perfect example offered by Wurttembergisches, tied to a small piece of paper by a crisply struck “Tientsin–Deutsche Post” circular datestamp, was described as a “Spitzen-Raritat,” or top rarity.

Among postal history items was a folded letter bearing stamps of both Hamburg and Prussia, sent in 1867.

Prior to Germany’s first stamp issues as a unified nation in 1872, most of the German kingdoms, duchies and city-states issued their own stamps. Although presumably the separate entities did honor each other’s postage in some cases, the plethora of different currencies and rates made such mixed frankings rare in practice.

In the case of this cover, which was sent from Hamburg to Bremen, the pair of Prussian 1-silbergroschen stamps (Scott 17) converted to 2 2/3 Hamburg schillings. Together with the Hamburg ½s stamp (Scott 13), the pair paid the 3s rate for that route.

The auction firm noted that mixed frankings typically occurred when letters were forwarded, rather than at origin. This cover sold for the equivalent of $17,400.