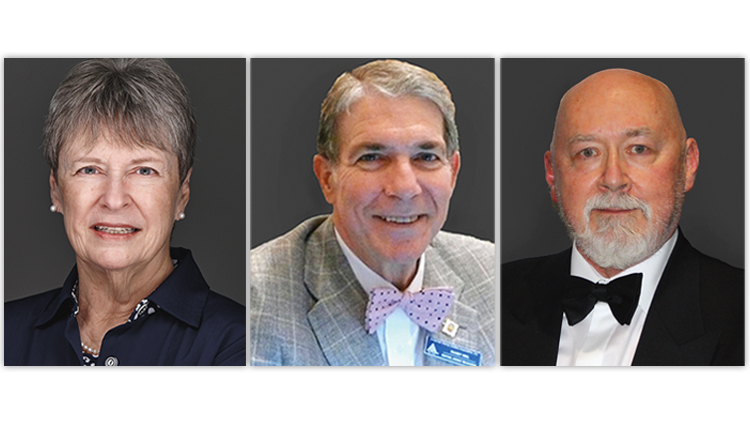 For the first time in the 70-year history of one of the stamp hobby’s most prestigious awards, the Collectors Club has named three simultaneous winners of the Alfred F. Lichtenstein memorial award for distinguished service to philately. They are Trish Kaufmann and Randy Neil of the United States and Charles Verge of Canada. The award was announced at the club’s annual meeting on Jan. 11.

Kaufmann is the sixth woman to be given the award, while Verge is the third Canadian. The full list of past awardees is available on the club’s website.

The club’s board of governors unanimously endorsed the decision to bestow the 2023 award to three people, whom the selection committee found to merit the honor equally. There has been no change in the award policy: In 2022, as in most prior years, the award went to a single winner, Chris Harman of the United Kingdom; in 2021, the award went to Mark Banchik of the United States and Patrick Maselis of Belgium.

Larry Haber, the president of the Collectors Club, said: “Our Lichtenstein Award winners this year are three of the most outstanding contributors to philately. Each of them has worked to benefit our hobby in ways that will outlast them, and this award simply recognizes their achievements and contributions for what they are: distinguished.”

Patricia A. (Trish) Kaufmann, who lives in Delaware, is best known as one of the leading experts on Civil War philately, particularly the stamps and postal history of the Confederate States. This is an area she has collected and exhibited for over 50 years, in addition to being a dealer and auctioneer.

Her leadership in the hobby has included serving as chair of the board of vice presidents of the American Philatelic Society and holding almost every role in the Civil War Philatelic Society: writing and editing extensively for the group’s journal and books, organizing its conventions, and leading its efforts in 2020 to rebrand from the Confederate Stamp Alliance — broadening its scope, maintaining relevance and drawing new members.

Kaufmann was introduced to Confederate philately in 1965 by her first husband, Brian Green. Together, they won a grand award at Florex in 1972 for an exhibit titled “The Evolution of Confederate Postal History.” Though not a Southerner, she found herself hooked.

“The luckiest thing that ever happened to me was becoming a dealer,” she recalled in a December interview. “I got to see things I would never have seen any other way.”

Taking a job with dealer and auctioneer John W. Kaufmann, she quickly took on a prominent role in his firm, becoming one of the first women to call a stamp auction, and in his life: The two were married in 1975. The Kaufmann firm, based in Washington, D.C., became one of the top stamp auctioneers in the United States.

Among the treasures she gaveled down was the first recovered McCoy, one of the 1918 24¢ Inverted Jenny airmail errors (Scott C3a) from a block of four stolen in the 1950s. The stamp was sold on behalf of the American Philatelic Research Library, on whose board Kaufmann was the first woman to serve.

After her husband passed away in 1988, Kaufmann closed the auction business to focus on being a specialist Confederate States of America dealer. Her research has led to numerous discoveries in Confederate postal history and stamp varieties. Some of these have upended catalog listings, most notably concerning the status of the 1861 3¢ postmasters’ provisionals.

She serves as a consultant to the Scott Specialized Catalogue of United States Stamps and Covers, and her articles have won frequent awards. Her well-designed website, www.trishkaufmann.com, is packed with useful philatelic resources.

Kaufmann continues to research and write extensively, and her articles appear regularly in the American Philatelist, American Stamp Collector and Dealer, La Posta and Kelleher’s Stamp Collector’s Quarterly, among others. Her December 2021 Collectors Club presentation, “Jenkins’ Express: Dodging the Yanks along the Rappahannock River,” was awarded best presentation for the year.

Kaufmann is married to Darryl Boyer, whom she met scuba diving off the Atlantic coast and who is “totally lacking the collector gene.” Together, they ran a wreck-diving charter boat for 15 years, while she maintained her stamp business. “I was happy to have a physical and cerebral life at the same time,” she said.

Besides the Confederate States, Kaufmann has collected and exhibited 19th-century valentines. She now collects vintage stamp boxes as well as studying and adding to her extensive collection of Confederate fakes and fantasies.

Randy Neil, a lifelong native of Kansas City, is nothing if not a cheerleader for the hobby. A man of seemingly boundless enthusiasm and energy, he has played the role of innovator and booster throughout his 70 years in philately, particularly in exhibiting and publishing.

He conceived, co-founded and led the American Association of Philatelic Exhibitors in 1986, spearheading efforts to revitalize and revolutionize the field of exhibiting in the United States and effectively inventing the idea of the international single-frame exhibit.

Neil also founded not one but two of the leading stamp publications in the United States today, American Stamp Collector and Dealer and Kelleher’s Stamp Collector’s Quarterly.

On top of this, his research and exhibit-building on the U.S. 2¢ red brown of 1883-87 (Scott 210) established that serious philatelic work could be done with a cheap stamp. Neil is one of the few American collectors to have won grand awards in national competitions for both stamp and literature exhibits. He has held a number of offices including president of the APS and is a 2021 signatory of the Roll of Distinguished Philatelists.

In a January phone interview, Neil recalled his philatelic beginnings: “When I was in fifth grade, I was given a stamp collecting kit for Christmas. I ignored it. Summertime rolled around and my mother got it out of my closet and opened it herself.”

Intrigued by his mother’s co-opting of his gift, he found his interest awoken. His father ended up buying another kit for him and took him to visit all four of the stamp stores in Kansas City in one day. The first stamp Neil remembers buying was a jumbo-sized commemorative from Ecuador. At one of the stores, he met the three philatelists who would become his mentors: Tom Alexander, David Beals and Creighton Hart.

In 1955, egged on by a school rival, young Neil hopped a train to New York to attend Fipex, the international exhibition at the now-demolished New York Coliseum. At the behest of Jacques Minkus, who was in charge of the youth section, Neil had entered his first exhibit: a one-page display of the 7¢ Liberty series stamp of 1954.

Neil began writing a youth column for the Weekly Philatelic Gossip in 1956, as well as a column for First Days, the journal of the American First Day Cover Society.

After attending the University of Kansas’ journalism school, he joined the organization of the new Kansas City Chiefs and started their cheerleading program, eventually writing The Official Cheerleader’s Handbook, a bestselling textbook. Neil’s career also included stints at CBS and as founder of the nonprofit National Film Society.

With his firm, Neil Print Media, he remains active publishing the Kelleher’s quarterly, and he is currently working on an exhibit of postal history related to the Japanese attack on Pearl Harbor.

Charles J.G. Verge, who was born in Montreal, Quebec, and now hails from Toronto, Ontario, is widely acknowledged as one of Canada’s foremost living philatelists, although he has been active all over the world.

Verge has been an international leader in the organizing and judging of philatelic exhibits, serving since 1995 at over 150 national and international stamp shows in North America, South America, Europe, the Middle East, Asia and Australia, most recently at Capex 2022 in Toronto.

For the International Federation of Philately (FIP), he acts as lead trainer and develops the curriculum for the jury academy.

He has exhibited in every major exhibit category except two (maximum cards and astrophilately). “I believe that, as a judge, one should understand the regulations and complexities of exhibiting in all classes,” he said.

A historian by training, Verge is the author of four books, including one on Canada’s 1959 St. Lawrence Seaway 5¢ invert error (Scott 387a), and countless articles. For many years he was the stamp columnist for the Ottawa Citizen, and he is a frequent contributor to the American Philatelist and Canadian Philatelist. He is also a past president of the Eire Philatelic Association.

He likes to stress the importance of research, especially in places philatelists often don’t think to look. “I find it interesting to do research in history, and bring in things nobody would have thought of,” Verge said in a December interview. “It’s important to paint a broad picture.”

He cited as an example his exhibit on the U.S. 1959 Dental Health 4¢ stamp (Scott 1135). “I spent seven years researching this one stamp. I went through the Third Assistant Postmaster General’s collection at the National Postal Museum. I went through the Bureau of Engraving and Printing files. Then it occurred to me to visit the headquarters of the American Dental Association in Chicago. In their archives they had a whole filing cabinet full of material on this stamp issue!”

His book on the Seaway inverts included memos from ministerial archives, detailing behind-the-scenes activity to deflect the embarrassment of the snafu.

Even the most experienced philatelists can still learn, Verge said, recalling the time another judge took him aside at an international show and suggested he rethink the arrangement of his exhibit on Haitian revenues. “He asked me to completely redo the development of the narrative,” Verge explained. “It hadn’t occurred to me, but he was right.”

Verge has worked across borders to bring U.S. and Canadian philately closer together, for instance by helping to broker reciprocity agreements over qualifications for national and international shows.

Verge is a 2020 signatory of the Roll of Distinguished Philatelists. Away from philately, he enjoys spending time with his granddaughter, Lea, and collecting hockey memorabilia.

Alfred F. Lichtenstein (1876-1947) was widely considered one of the greatest American philatelists of the first half of the 20th century. The award in his memory was established by the Collectors Club in 1952, and its first recipient was Lichtenstein’s good friend and co-founder of the Philatelic Foundation, Theodore Steinway.

In addition to the Lichtenstein award, the club announced its award for best presentation of 2022 to Jean Wang for her Nov. 2 online talk, “Evolution of a Thematic Exhibit — Blood: A Modern Medicine”; and the Robert P. Odenweller award for best article in the Collectors Club Philatelist to Steven Roth for his two-part “Mail by Stage Coach: The Carriage of Mail by Eastern Stage Lines before 1860,” which appeared in Vol. 101, Nos. 3 and 4.