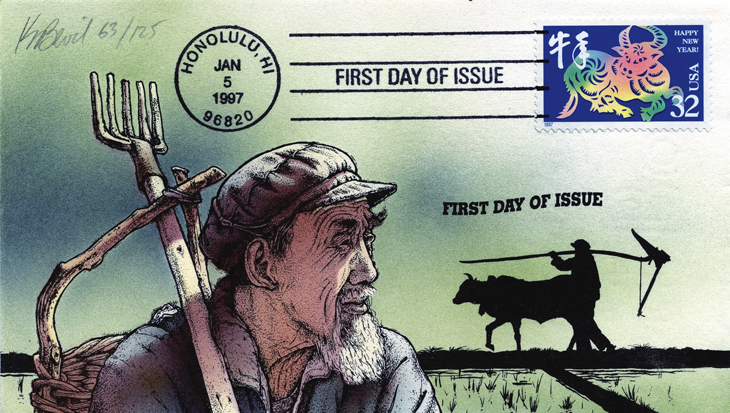 First-day covers created by cachetmaker Kendal Bevil are printed from his original ink drawing and hand-painted. This award-winning example is for the 1997 32¢ Year of the Ox stamp and is one of the artist’s favorites.

One of the most popular cachetmakers currently producing first-day covers is artist Kendal Bevil of Port Neches, Texas.

He has been producing cachets for 25 years. His first Bevil Quality Cachet was created for the Claire Chennault issue of 1990 (Scott 2187), although he did some work for Pugh Cachets before that.

Bevil credits Julian Pugh with introducing him to FDC cachets, first helping him with the 1989 Shuttle Docking at Space Station hologram envelope (Scott U617). He was not a collector of stamps or covers before that.

“I kind of see myself as coming in the back door,” Bevil told Linn’s Stamp News in an interview earlier this year. “When I painted the Space Station hologram, I had literally no idea what I had in my hand, what I was painting, what I was becoming a part of.”

He does not produce cachets for every United States issue, only those he thinks will appeal to his subscribers. Chances are, he will skip issues that contain a large number of designs.

“I consider the overall interest of my collector base. Do they want this? And if it’s a set, do they want 50 flowers? No, they don’t. Do they want four Batman? Oh, that’s tough.”

Perhaps the most important criterion is, “Will it make a good visual appealing piece to hold in your hand?” He added, “Having subscribers is wonderful, but dangerous. I have to make sure that they get a really good product.”

Bevil’s cachets are printed first from his original drawing, and then hand-painted with an airbrush using with Higgins Fadeproof inks.

Bevil said he needs good reference material to make a good cachet, and a lack of it may prompt him to skip an issue. He prefers large subjects — a single flower rather than a field of them, for example — and, he says, “If it’s a face, I got it. I just am fully confident in portraits.”

His cachet for the 1997 32¢ Year of the Ox (Scott 3120), which won an award from the American First Day Cover Society and is shown here, might be his favorite.

“I had a choice of kind of being a McDonald’s, or Steak and Ale,” he said. “In other words, high volume and a good medium price or low volume and going to a higher dollar, and I chose the former, because I wanted to have more friends and a steadier ride.”

To ensure as much uniformity as possible for each issue’s cachets, Bevil puts 49 of the covers on an easel and paints them all at the same time, because “otherwise, after 10-20 covers, there will be variations.” Each of Bevil’s covers comes with a certificate, which includes indication of when the cover was painted.

He and his wife, Janice, are trying to shorten the time between when a stamp is issued and when a collector gets the cacheted cover for it. The goal is a month, but he admits some issues sit on a shelf longer, where there is a danger of the issue getting “stale.” Bevil produces about 150 to 175 covers per issue, and said that he’ll “probably do about 35 issues” in 2015.

“It’s a great honor to see my work going into collections,” Bevil said. “What’s really great about this hobby is the friendships and relationships that are behind each cachet.”