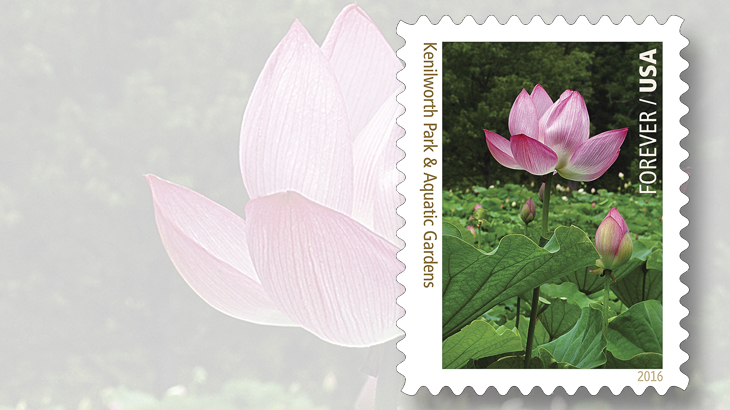 A sacred lotus aquatic plant is featured on a forever stamp commemorating Kenilworth Park and Aquatic Gardens. The stamp will be issued June 2 in the National Parks set of 16.

The 11th stamp revealed by the United States Postal Service in its planned set of 16 National Parks stamps will commemorate Kenilworth Park and Aquatic Gardens in Washington, D.C.

The stamp will be part of the set honoring the 100th anniversary of the National Park Service in the United States. The Postal Service has been revealing one stamp in the set each day, beginning April 4.

The set will be issued June 2 during World Stamp Show-NY 2016, which is taking place from May 28 to June 4 at the Javits Center in New York City.

The 700-acre Kenilworth Park and Aquatic Gardens were first developed by Walter Shaw on land he purchased in the 1880s, in an effort to recreate some of the familiar surroundings of his native Maine. Congress purchased the land in 1938 to add it to Anacostia Park.

Kenilworth Park and Aquatic Gardens offers a boardwalk through the aquatic gardens and fields of water lilies. The park includes birds and other wildlife, recreation areas and more.

The stamp photograph features an aquatic plant known as the sacred lotus from the park. The photograph is by Cindy Dyer, whose photos of water lilies previously appeared on four forever stamps issued March 20, 2015 (Scott 4964-4967). Those water lily images were also photographed at Kenilworth Park.