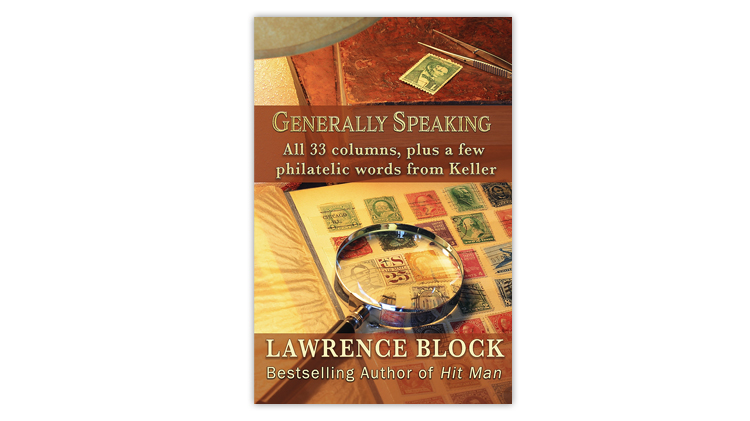 Linn’s Stamp News was fortunate enough to publish a monthly column by acclaimed mystery writer Lawrence Block from 2009 to 2012. And judging from the reactions of many Linn’s readers, they considered themselves fortunate as well.

A longtime general collector of worldwide stamps that were issued before 1940, Block began by sharing the story of his own first foray into stamp collecting and then took us on a personally guided tour of the hobby, month after month, with the insight and understanding of a committed collector possessing just the right amount of wry humor.

In one column Block described the tribulations and triumphs of filling spaces in his stamp album, and in another he laid out a case for choosing the Scott Classic Specialized Catalogue of Stamps and Covers 1840-1940 as the only book you’ll need on a desert island — even if your stamp collection doesn’t make the trip.

Now Block has published a new book titled Generally Speaking and subtitled “All 33 columns, plus a few philatelic words from Keller.”

In case you haven’t been introduced, Keller is a contract killer who also happens to be a dedicated collector of classic worldwide stamps.

If you’re a stamp collector with any affection for a well-written crime story, you might consider checking out Block’s Hit Man series.

Along with the Linn’s columns gathered together under one handsome cover, Generally Speaking also offers a few enticing pages from each of the first five Hit Man novels. Each excerpt is steeped in Keller’s interest in stamps.

And in between are all 33 of the Linn’s columns that share Block’s affection for classic stamps and the connections to world history that so many of them represent.

The new book is offered in paperback and Kindle editions from Amazon.com, and according to Block, “there’ll be a hardcover edition with library binding available soon.”