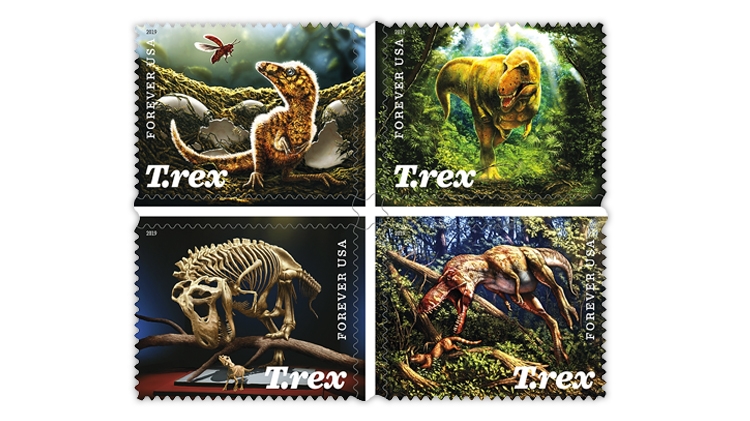 Four United States stamps showing Tyrannosaurus rex will be issued Aug. 29 in a pane of 16. The stamps will have a lenticular component to simulate movement in the illustration. 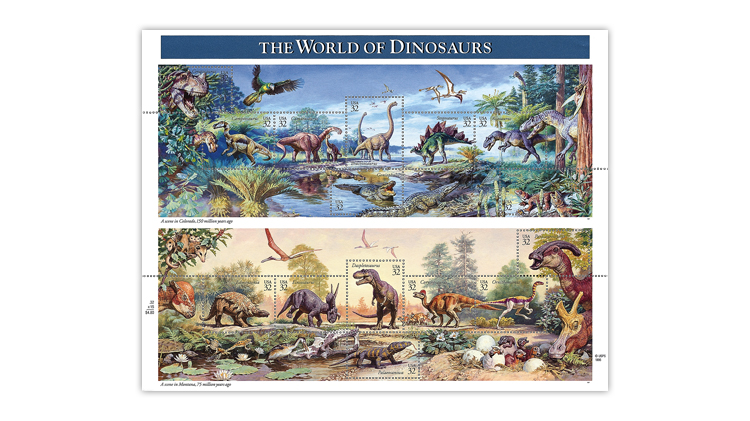 Several other U.S. sets have celebrated dinosaurs, including this 1997 issue of 15 32¢ stamps with dinosaur artwork by James Gurney. 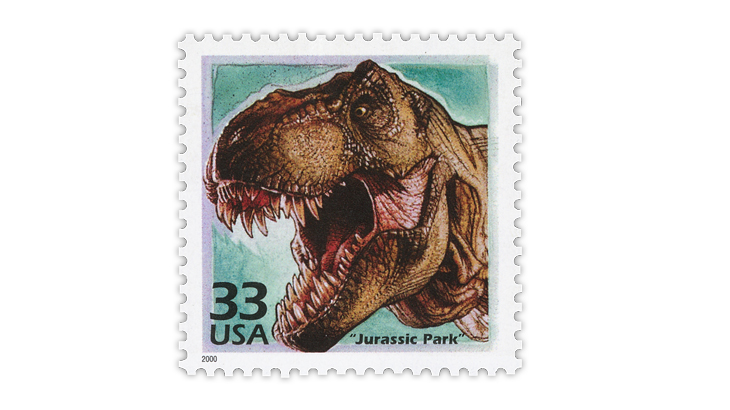 Tyrannosaurus rex is featured on this 33¢ stamp from the 1990s set in the Celebrate the Century series. The stamp, issued in 2000, commemorates the 1993 movie Jurassic Park. 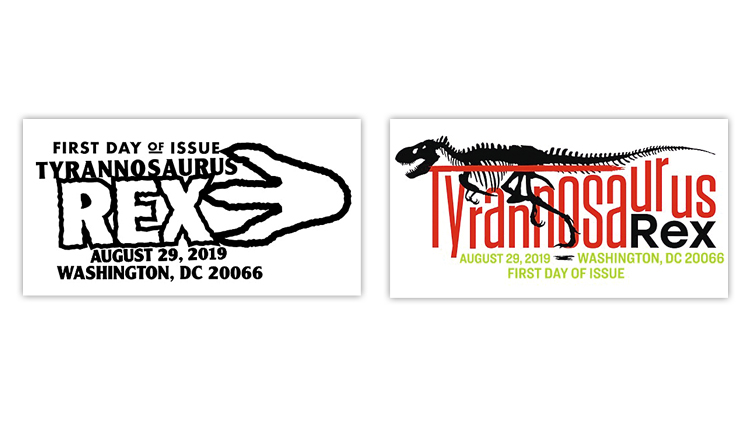 Two pictorial first-day cancels have been prepared for use with the new Tyrannosaurus Rex stamps. One postmark shows the creature’s footprint, while the other depicts a complete T. rex skeleton.
Previous
Next

The United States Postal Service is doing all it can to bring Tyrannosaurus rex back to life.

A USPS spokesman confirmed to Linn’s Stamp News that a lenticular component to its new set of four stamps simulates motion in the stamp illustration. The effect will be similar to that seen on the Rabbit and Hat stamp on the 2018 Art of Magic souvenir sheet of three (Scott 5306).

That souvenir sheet was the first U.S. stamp issue to employ lenticular printing, which conveys movement in a still picture by applying a transparent ridged plastic overlay that alters a viewer’s perception of the scene when the stamp is rotated slightly.

The new set of four Tyrannosaurus Rex stamps will be issued Aug. 29 in a pane of 16.

“Four dynamic designs on a pane of 16 stamps depict the awe-inspiring dinosaur in growth stages from infancy to adulthood,” according to the Postal Service.

“One design illustrates a face-to-face encounter with a T. rex approaching through a forest clearing; another shows the same young adult T. rex with a young Triceratops — both dinosaurs shown in fossil form.

The young adult depicted on two of the stamps has been dubbed “the nation’s T. rex.” It was discovered on federal land in Montana and is considered one of the most important specimens of the ancient creature ever found.

The dinosaur’s remains are now exhibited at the Smithsonian National Museum of Natural History in Washington, D.C.

The museum will host the Aug. 29 first-day ceremony for the new stamps.

The program will begin at 11 a.m. in the Baird Auditorium at 10th Street and Constitution Avenue NW.

Tyrannosaurus rex was the largest of the Tyrannosauridae predatory dinosaurs, according to the museum. Its remains have been discovered only in western North America.

“T. rex was one of the largest terrestrial carnivores of all time,” the museum said. “It stood approximately 15 feet high and was about 40 feet in length, roughly six tons in weight. In its large mouth were six-inch long, sharp, serrated teeth.”

The giant predator lived during the last years of the Cretaceous period, roughly 65 million to 85 million years ago.

“Due to its ferocity and immensity, T. rex lives on in the imagination like no other dinosaur,” according to the Postal Service. “With powerful jaws packed in its four-foot-long skull and banana-sized teeth serrated like steak knives, T. rex could bite easily through the flesh and hefty bones of even large dinosaur prey.”

The stamp designs include the shortened version of the scientific name, “T. rex,” printed in italicized white dropout lettering.

Each design is repeated four times in the 16-stamp pane. Banknote Corporation of America printed the stamps by flexography on the Gallus RCS press.

The stamp set is the latest U.S. issue to celebrate prehistoric animals, a popular subject on stamps worldwide.

The first U.S. issue to enter this realm was the 6¢ Age of Reptiles stamp (Scott 1390), part of the 1970 Natural History set of four issued to commemorate the 100th anniversary of the American Museum of Natural History in New York City.

One of the most popular U.S. sets featuring dinosaurs was the 1997 pane of 15 32¢ stamps titled The World of Dinosaurs.

The stamps were researched and illustrated by James Gurney; the two panoramic scenes are his respective oil paintings of dinosaurs from the Jurassic and Cretaceous periods. Among the creatures shown in the latter illustration is Daspletosaurus, a smaller relative of T. rex.

The Postal Service has prepared two pictorial first-day cancels for the T. Rex issue, one in black and the other in color. The black postmark shows the large footprint of the carnivorous dinosaur, and the color postmark depicts a complete T. rex skeleton.