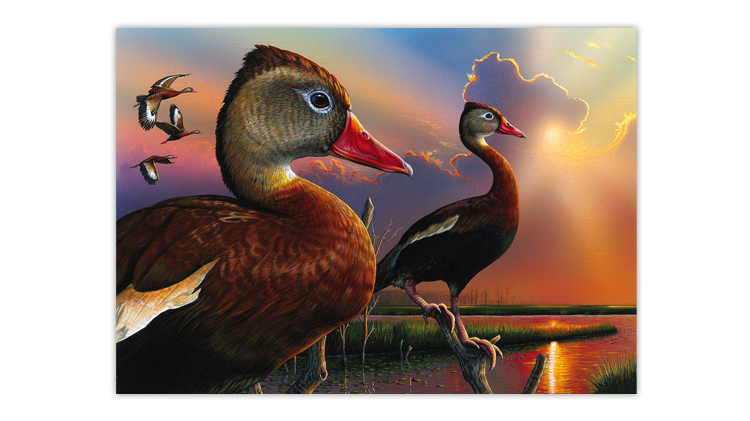 When the 2020 federal duck stamp is issued next summer, it will feature Eddie LeRoy’s acrylic painting of two whistling ducks.

The annual contest is sponsored by the United States Fish and Wildlife Service, which issues the popular collectible stamp.

LeRoy’s painting was one of 190 entries in this year’s competition, which is open to all U.S. citizens, nationals and resident aliens age 18 and older.

The artists submitted their completed artwork to the Fish and Wildlife Service between June 1 and Aug. 15. The artwork was displayed during the competition and judging, which is part of an annual event that is open to the public.

The federal contest win was the first for LeRoy, whose paintings have appeared on Alabama state duck stamps issued in 1999, 2005 and 2015.

Second place went to Cory McLaughlin of Texas, who submitted an oil painting of a black-bellied whistling duck pair.

Frank Mittelstadt of Wisconsin took third place with an acrylic painting of a bufflehead pair.

The art contest winner receives no compensation other than a pane of stamps carrying his design signed by the Secretary of the Interior. However, the artists can profit by selling prints of their work, which are sought by wildlife art collectors, stamp collectors and others.

The artwork for each federal duck stamp, also known as the federal migratory bird hunting and conservation stamp, has been chosen annually in a juried competition since 1949. The contest originally took place in Washington, D.C., but it is now held at a different location each year.

“These artists are extremely talented, and the quality of the art is matched by the incredible conservation work funded by Duck Stamp sales,” said U.S. Secretary of the Interior David Bernhardt. “By purchasing a Duck Stamp, waterfowl hunters have helped raise millions of dollars to conserve wildlife and healthy wetland habitats within the National Wildlife Refuge System.”

Waterfowl hunters age 16 and older are required to purchase the federal duck stamp and carry it when they hunt.

The funds collected from sales of the $25 stamps raise about $40 million each year to conserve and protect wetland habitats in the National Wildlife Refuge System, according to the Fish and Wildlife Service.

Though not valid for postage, the federal duck stamp is a popular collectible listed and valued in Vol. 1 of the Scott Standard Postage Stamp Catalogue and in the Scott Specialized Catalogue of United States Stamps and Covers.