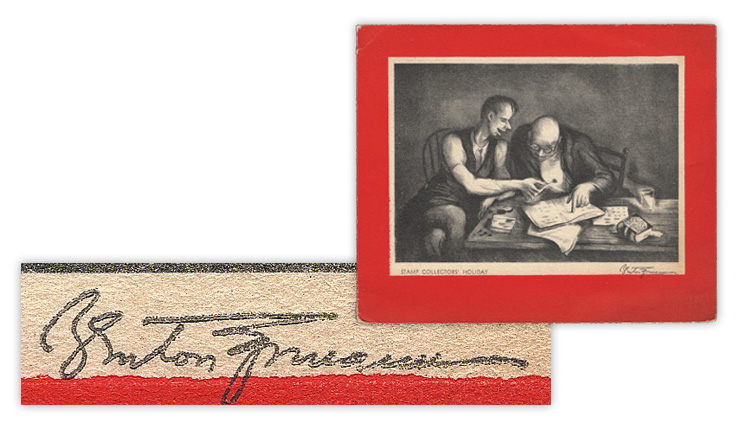 The front of this 1937 Christmas card has a nice pencil sketch titled on the card “Stamp Collector’s Holiday.” The name of the artist is not decipherable as printed, but a Linn’s reader has identified the artist and the proper name of the artwork.

In the U.S. Stamp Notes column in the Jan. 10 issue of Linn’s Stamp News, I presented the 1937 Christmas card front shown here together with a close-up of the mostly unreadable signature of the artist.

The message inside the card reads, “Greetings of the Season and a Joyous New Year.” According to the back of the card, it was produced by “American Artists Group, NY.”

Because the name of the artist was not decipherable, I asked Linn’s readers if anyone could identify the artist.

Greig Best stepped up to the challenge. He said that “after an hour of intense internet searching and narrowing the subject,” he discovered that the artist was Benton Murdoch Spruance.

The picture is titled The Philatelists, but the name was altered for use on the Christmas card.

Best reported that lithographs of The Philatelists had been offered for sale online.