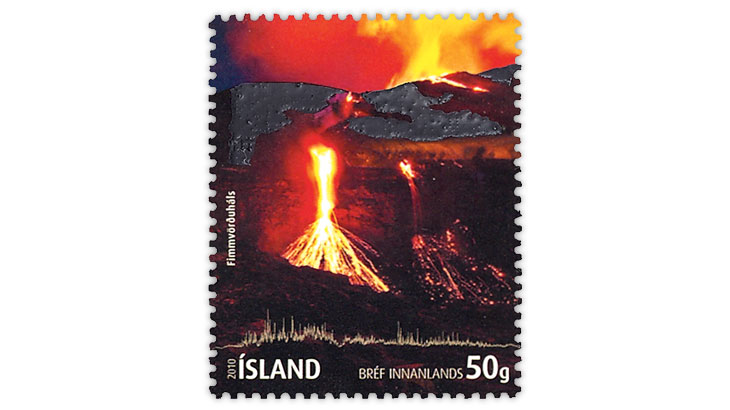 Iceland announced the closing of its philatelic division in 2019. Shown is one of three stamps Iceland issued July 22, 2010, with ash from the eruption the Eyjafjallajokull volcano a few months earlier embedded in the ink used for parts of the designs. 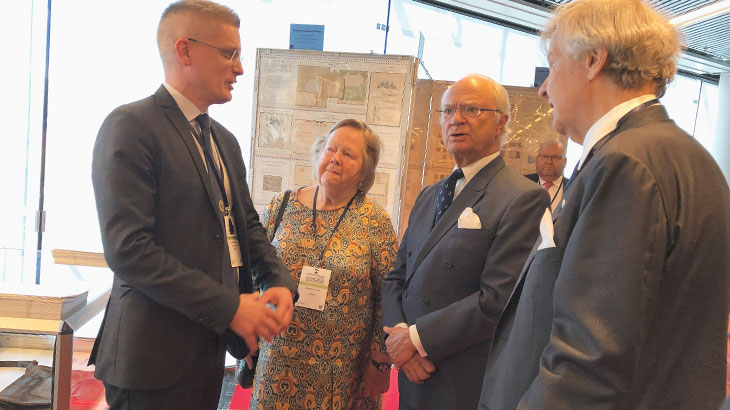 The year 2019 has come to a close — a year with a number of important stories involving stamps, the United States Postal Service, auction happenings and more.

Among the many highlights, the biggest standout in my book was the number of headline-making stories about the United States Postal Service.

On Oct. 16, Postmaster General Megan J. Brennan, a supporter of stamp collecting, announced that she will retire Jan. 31, 2020, after five years leading the Postal Service.

Another postal story with a worldwide impact was the Universal Postal Union’s endorsement of a compromise plan that will allow the United States — not the UPU — to set the prices for incoming foreign mail. This compromise, reached Sept. 25, came after threats that the United States wanted to withdraw from the UPU.

Also, in September, a U.S. appeals court struck down the 2019 5¢ letter rate hike. That court case has not been resolved as of this writing.

Another postal story that received a lot of attention reported how a postal manager in Louisiana stole more than $630,000 in postage stamps. Postal authorities referred to it as one of the largest internal postal thefts by an employee in the history of the U.S. Postal Service, according to government prosecutors.

In the stamp world, Iceland made headlines after stating it will close its stamp and philatelic department in 2019 as a cost-cutting measure, and that it also may stop issuing postage stamps in 2021.

The Royal Philatelic Society London celebrated its 150th anniversary in 2019, hosting events in England, the United States and other locations. But it was the successful Stockholmia philatelic exhibition in May that truly shined.

Sweden’s King Carl XVI Gustaf opened the exhibition, Daniel Ryterband of the United States took top honors for his exhibit “A Country Divided: Effects of the American Civil War on the Mails,” attendance was approximately 7,800 people, and the exhibition closed its books in the black. (The amount will be disclosed at the London 2020 exhibition.)

Some very interesting items crossed the auction block in 2019.

Another big story for 2019 was about a life member of the American Philatelic Research Library who left a $1.5 million investment account to the library when he died in 2018. That gift was used to pay off outstanding building debt in October 2019.

Internet scammers targeted at least two prominent philatelic organizations, trying to steal money from the groups through a fraud scheme. One organization lost more than $49,000.

The U.S. Postal Service created a new product that seemed to pique the interest of stamp collectors and railroad enthusiasts. The box set contains six imperforate (not die-cut) panes of what the Postal Service describes as progressive proofs, packaged with a book about the stamp issue (the set of three Transcontinental Railroad forever stamps). As of this writing, the box set is still available for purchase, but I would venture a guess that the quantities remaining are low.

Great Britain’s Royal Mail suffered a snafu shortly after it unveiled its 2019 D-Day stamp issue in late 2019. Within hours it was determined that the photograph shown on one stamp was not related to the June 6, 1944, Allied invasion of the beach at Normandy that the stamp was supposed to commemorate. That design was replaced, and the stamps were issued on the June 6 anniversary date.

And lastly, the Postal Service is about to close the chapter on the 2013 $2 Jenny Invert stamp panes. It recalled all the panes from post offices around the country and returned them to sale through the USPS Stamp Fulfillment Services, the federal agency’s retail mail-order division in Kansas City, Mo.

Here’s to keeping things interesting for 2020, and hoping a Linn’s reader finds that elusive upright version of the 2013 Jenny Invert stamp.

Happy New Year to all.