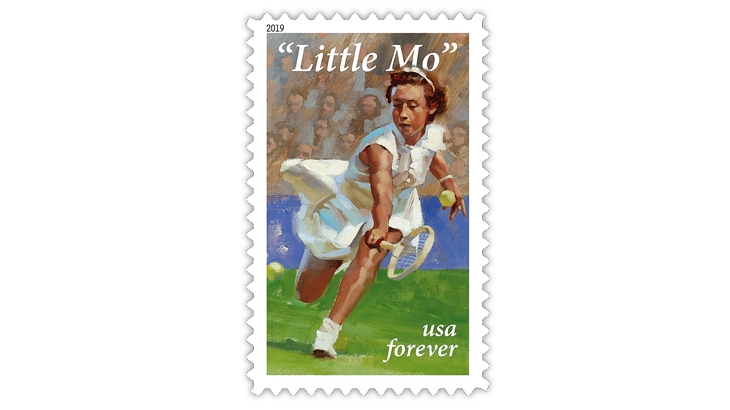 Maureen “Little Mo” Connolly Brinker is commemorated on this forever stamp that will be issued April 23 in Dallas, Texas. The tennis star won 12 major titles in a career cut short by injury.

A record-setting champion from the world of tennis will be honored on a new United States forever stamp April 23.

Her career was cut short by injury, but in the space of just four years, Connolly won 12 major titles, including the 1951 U.S. Women’s National Singles Championship at age 16.

By age 18, Connolly had won all four major tennis tournaments in a single year — 1953 — becoming the first woman to complete the grand slam. Only two other women have since accomplished the same feat.

The nondenominated (55¢) Little Mo commemorative stamp will be issued in a pane of 20 with a first-day ceremony at the Southern Methodist University Tennis Complex, 5669 N. Central Expressway, Dallas, Texas.

The ceremony is free and open to the public, but for those planning to attend, the U.S. Postal Service encourages online registration at usps.com/littlemo.

“The stamp art features an oil-on-linen painting of the tennis star by Gregory Manchess,” according to the Postal Service. “Based on a black-and-white photograph taken in 1952, the portrait is a colorful interpretation of Connolly hitting a low volley.”

Maureen Connolly was born Sept. 17, 1934, in San Diego, Calif. She began playing tennis at age 10, serving as a ball girl for San Diego tennis instructor Wilbur Folsom, who taught her the basics of the game. Her next coach, Eleanor Tennant, guided Connolly as she quickly achieved a level of dominance in the sport.

According to the International Tennis Hall of Fame, in which she was inducted in 1968, “Connolly struck the ball cleanly and forcefully, powering past her opponents with a game that relied heavily on groundstrokes and little on net play.”

When she won the 1951 women’s singles championship, she was the youngest player to do so.

While riding her horse shortly after winning the 1954 Wimbledon title, Connolly was struck by a passing concrete mixer truck, badly injuring her right leg. She retired from competition in 1955 and married Norman Brinker, but she continued her impact on the sport as an instructor and coach and as a newspaper correspondent.

In 1968 she founded the Maureen Connolly Brinker Tennis Foundation with tennis promoter Nancy Jeffett, who would lead the foundation supporting young players after “Little Mo” died of cancer the following year, at age 34.

“Mom would be thrilled and humbled with this amazing honor by the United States Postal Service,” Simmons said in a statement on the foundation’s website. “She was a remarkable woman who just happened to be a very good tennis player. Mom’s career was over 65 years ago, and yet her esteemed legacy and significant impact continue to be highly recognized today. My sister Brenda and I are so incredibly proud of this astounding and touching tribute to her.”

The Postal Service has designed two pictorial postmarks for use as first-day cancels for the new stamp. Both feature the nickname “Little Mo” in block letters. An arcing tennis ball in flight is seen on the black postmark, and crossed tennis rackets illustrate the digital color postmark.

Connolly and Gibson competed in the quarterfinals of the 1953 U.S. National Championships, with Connolly victorious and eventually winning the tournament to complete her grand slam.