London 2022 international stamp exhibition offered much to do and see 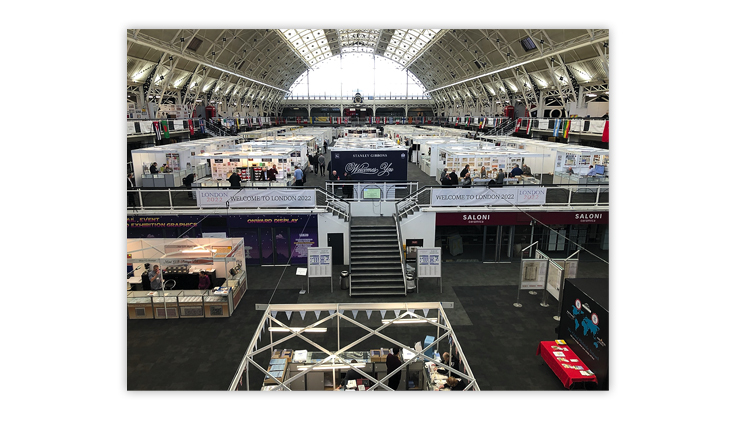 The London 2022 international stamp exhibition was held Feb. 19-26 at the Business Design Centre in the Islington area of London. Image courtesy of Armagan Ozdinc.

After years of planning, the London 2020 International Stamp Exhibition, which was initially set for May 2-9, 2020, had to be postponed for almost two years because of the coronavirus pandemic that took the whole world hostage.

After the exhibition was renamed London 2022, it finally took place Feb. 19-26 at the Business Design Centre in the Islington area of the capital city of the United Kingdom.

The exhibition opened on the day after Storm Eunice pounded the United Kingdom with winds up to 122 mph. It was described as the worst British storm experienced in 32 years. Both rail and air services to London were suspended for a good part of the day. Many attendees of the exhibition had to endure travel disruptions and scary landings at London Heathrow Airport.

By the time the exhibition opened on Saturday, the weather had calmed, the booths were set up, the frames of exhibits had been assembled, and the philatelic celebrations could begin.

With COVID-19 restrictions still in force in certain parts of the world, coupled with travel difficulties caused by the storm and other factors, attendance was low compared to past international exhibitions. There were a number of empty booths.

Other than Royal Mail, the only attending postal administration was Posta Faroe Islands. The post offices of Ireland and Monaco had to drop out at the last minute due to pandemic concerns. Such a low number of postal administrations participating in an international stamp show was unusual.

Most of the big auction houses of Europe were there. However, there were very few dealers from continental Europe. Most of them apparently chose not to attend due to Brexit-related restrictions. A few European dealers who
attended the exhibition said that they had to spend almost half a day at the United Kingdom customs to clear their stocks.

On a separate note, some of the judges and commissioners I talked to expressed that an eight-day exhibition in an expensive city like London was long.

Royal Mail had a large booth at the venue. It offered a range of souvenirs for collectors.

On Feb. 18, the day before the start of London 2022, Royal Mail issued a souvenir sheet to celebrate the stamp designs of David Gentleman, an English artist who produced more than 100 designs for Royal Mail since 1962. Six of his designs are depicted on the sheet.

To read the rest of Armagan Ozdinc’s recap of the London 2022 show, subscribe to Linn’s Stamp News.