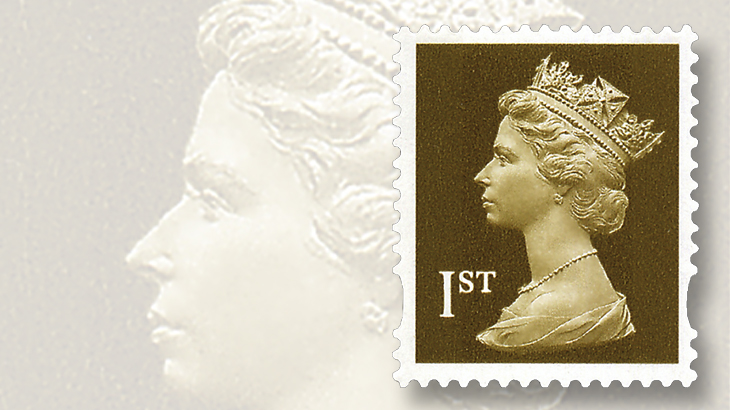 Two large elliptical perforations, one on each side, were added to Great Britain’s Machin stamps starting in 1993 to make the stamps harder to counterfeit. 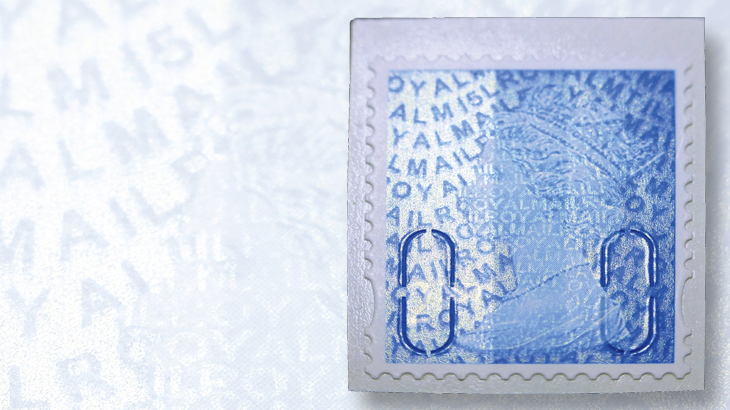 An iridescent overprint was added to Machin stamps starting in 2009 to deter counterfeiting. Visible on this stamp are the year code “15” at the top, just to the left of the phosphor band, and the source code “T” at the upper right. The “T” indicates that
Previous
Next

This concludes a series of three columns on the Machin definitives, which were introduced 50 years ago, on June 5, 1967. The first column was published in the May 8 issue, page 17; and the second in the May 29 issue, page 20.

Security against forgery and reuse has been a concern of the British Post Office since the first postage stamps were issued in 1840. Several features have been introduced to Machins to increase security.

Two large elliptical perforations were added to Machins starting in 1993, in an effort to make the stamps harder to counterfeit. The Scott Standard Postage Stamp Catalogue calls these syncopated perforations.

Straight edges in booklet panes, which had been introduced in 1987, were discontinued in 1993 for the same reason.

In 1995, a £1 violet Machin stamp was issued in the standard low-denomination size (Scott MH237). It was coated with a shiny, transparent, iridescent ink called iriodin to make the stamp hard to counterfeit. The coating was discontinued in 2007 when a new cerise £1 Machin (MH373) replaced the violet one.

Iridescent overprints were introduced to all self-adhesive Machins in 2009 and to conventionally gummed Machins in 2013. These consist of wavy lines of the text “ROYAL MAIL.” The lines over the queen’s portrait have a different pattern than those over the background and denomination tablet.

Starting in 2010, a two-digit year code representing the year the stamp was printed replaces two letters of the overprint. The location of these codes on the stamp is changed periodically.

The text of the overprint is sometimes changed temporarily to mark a special event. The Scott catalog describes the overprints but only briefly mentions the presence of source and date codes. These overprints are still in use.

Finally, two extended oval-shaped slits were added to self-adhesive stamps starting in 2009. These were intended to make it difficult to peel off an uncanceled stamp from an envelope. The Scott catalog describes these as oval slits.

In the June 12 issue of Linn’s Stamp News, Larry Rosenblum offers a full story on the 50th anniversary of the fascinating Machin stamps, featuring an in-depth look at the varieties that the classic design has yielded during its remarkable run.

Subscribe to Linn’s Stamp News to read all about it!