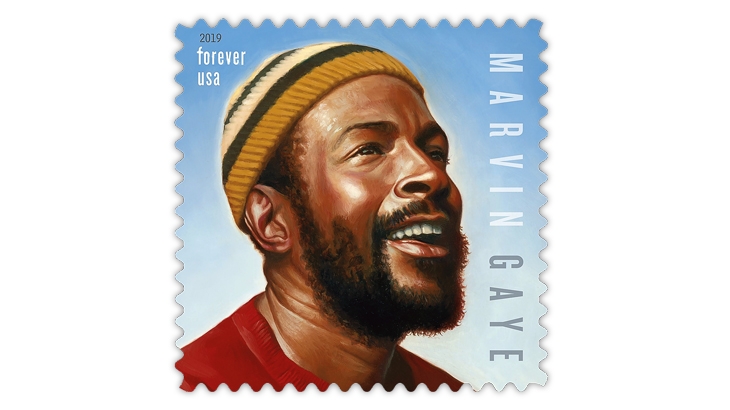 The United States Postal Service is honoring musician Marvin Gaye on April 2 with a new forever stamp in its Music Icons commemorative series. 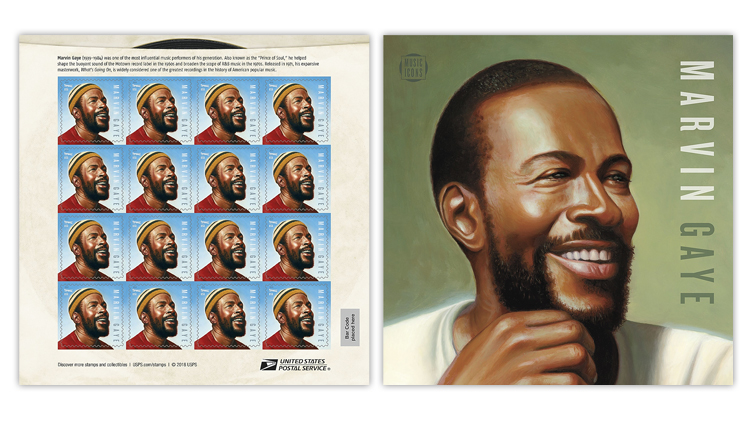 The pane of 16 Marvin Gaye commemorative forever stamps is designed to resemble a 45 rpm single sleeve. The artwork on the back is a portrait of the singer by Kadir Nelson, who also illustrated the stamp. 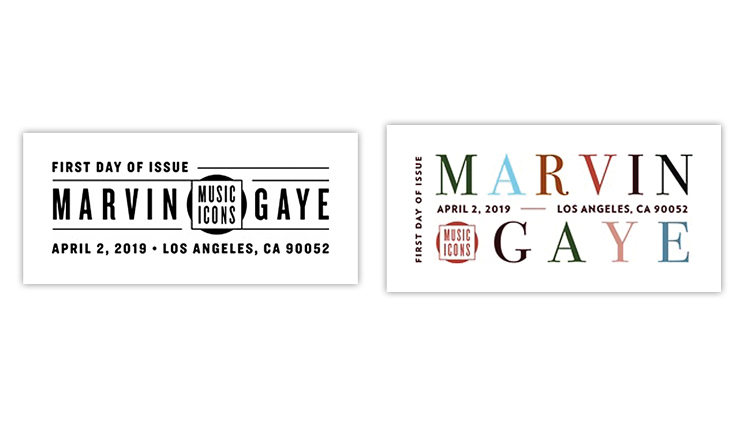 The newest stamp in the United States Postal Service’s Music Icons commemorative series pays tribute to Marvin Gaye (1939-1984), whose multifaceted music career took him to the top of the pop and R&B charts in the 1960s, 1970s and 1980s.

Gaye found fame worldwide with hits such as I Heard it Through the Grapevine, What’s Going On, Let’s Get it On and Sexual Healing. Known for his soulful vocals and his memorable live performances, he also wrote or co-wrote and produced many of his most successful singles.

Gary R. Barksdale, chief postal inspector, will serve as dedicating official at the ceremony, which is free and open to the public, with free parking available. For advance registration and parking information, visit usps.com/marvingaye.

The Marvin Gaye stamp is the ninth issue and the 12th stamp overall in the Music Icons series, which began with the Lydia Mendoza forever stamp issued May 15, 2013 (Scott 4786).

Each issue in the series consists of a single stamp design in a pane of 16 intended to resemble the sleeve of a 45 rpm single record. The John Lennon issue of 2018 (Scott 5312-5315) is the exception, because a gradient rainbow color pattern on the stamps resulted in four major varieties.

The Marvin Gaye stamp design features an oil-on-panel painting by Kadir Nelson “inspired by historic photographs,” according to the Postal Service.

The portrait, against a sky blue background, shows Gaye singing, dressed in a red shirt and multicolor knit cap. “Marvin Gaye” reads down along the right side of the stamp, and “forever” and “usa” are found at upper left, with the year date 2019 in the upper left corner.

A short biography is printed across the top of the 16-stamp layout.

“Marvin Gaye (1939-1984) was one of the most influential music performers of his generation. Also known as the ‘Prince of Soul,’ he helped shape the buoyant sound of the Motown record label in the 1960s and broaden the scope of R&B music in the 1970s. Released in 1971, his expansive masterwork, What’s Going On, is widely considered one of the greatest recordings in the history of American popular music.”

A second Kadir Nelson oil painting of Gaye, smiling and wearing a white shirt, is shown on the reverse of the pane. Gaye’s name similarly reads down along the right side of the pane reverse, and the Music Icons logo is printed in the upper left corner.

Gaye was born in Washington, D.C., on April 2, 1939. He sang in the church choir and learned to play drums and piano. He joined in with vocal groups during high school and sang professionally after a stint in the Air Force, backing original Moonglows vocalist Harvey Fuqua.

Gaye was signed by Berry Gordy to Motown Records in 1961. He charted the following year with a single he co-wrote, Stubborn Kind of Fellow, recorded on Tamla, a Motown subsidiary.

As a solo artist, Gaye hit gold with I Heard it Through the Grapevine in 1968. With the album What’s Going On, released in 1971, Gaye established himself as a voice for social change. The album charted three singles in the Top Ten.

Gaye’s career continued even as he struggled with substance abuse and the failure of two marriages. He left Motown after 21 years and recorded the album Midnight Love for Columbia in 1982, winning two Grammy awards for the single Sexual Healing.

Gaye had a stormy relationship with his father throughout much of his life, and on April 1, 1984, the singer was shot and killed by his father after an altercation between them.

Calling Gaye a music visionary, the Rock and Roll Hall of Fame inducted him in 1987.

“Marvin Gaye made a huge contribution to soul music in general and the Motown sound in particular,” the hall noted.

Many of Gaye’s recordings are included in listings of the all-time greatest singles and albums, and What’s Going On was added to the National Recording Registry at the Library of Congress in 2003.

Nelson, whose work is prominent in books and magazines, including covers for the New Yorker, also created artwork for the album Michael, released in 2010 after Michael Jackson’s death, and Drake’s 2013 album Nothing Was the Same.

The Postal Service has prepared two special first-day cancels for the Marvin Gaye stamp, one in black and the other in color. Both feature the singer’s name spelled out in uppercase letters as the primary design element, along with the Postal Service’s Music Icons logo.