May 17 first-day ceremony planned for U.S. Heritage Breeds set of 10 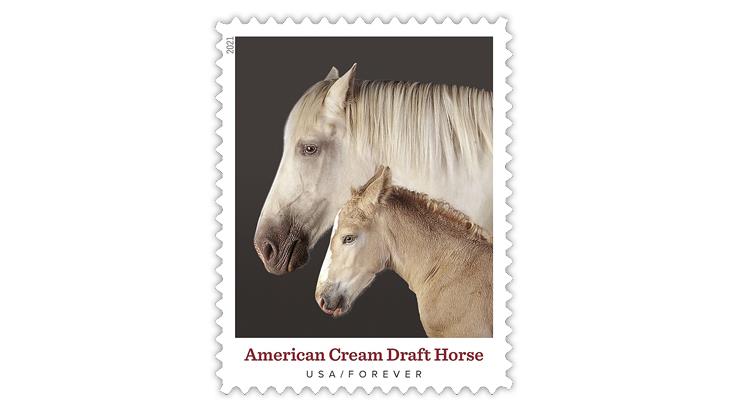 An American cream draft horse and foal are featured on one of 10 different Heritage Breeds forever stamps. The stamps will be issued May 17. 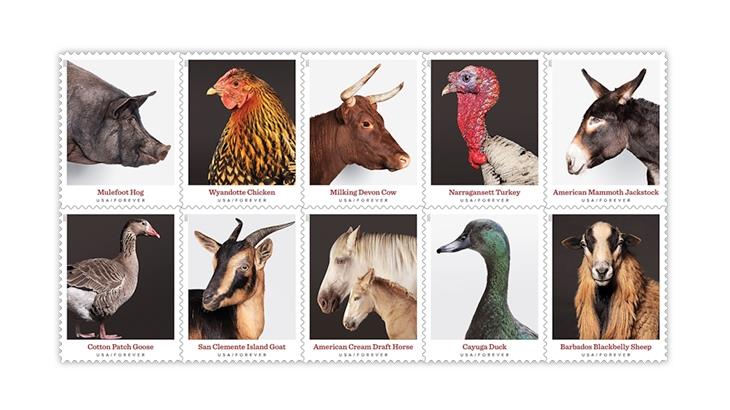 The United States Postal Service describes the heritage breeds pictured on the new stamps as “pre-industrial farm animals that are enjoying renewed attention for their versatility, adaptability, and unique genetic traits.” 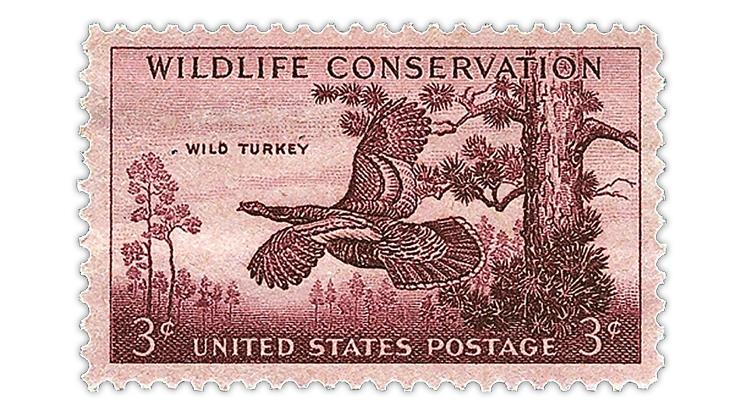 Relatives of the heritage breeds have appeared on U.S. stamps in the past, including the wild turkey on this 1956 3¢ Wildlife Conservation stamp. 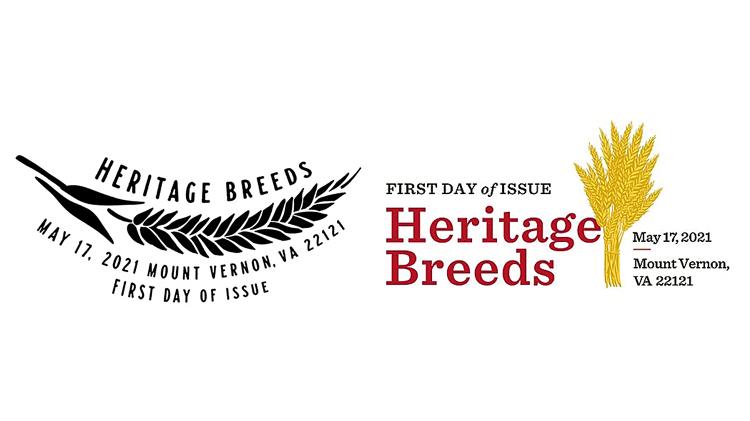 Two pictorial first-day cancels created for the Heritage Breeds stamps, one in black and the other in color, show stylized images of grain.
Previous
Next

The nondenominated (55¢) stamps will be sold nationwide in panes of 20 beginning on the issue date, May 17.

And for the first time in more than a year, the Postal Service plans to have a first-day ceremony on location, with attendance open to the public.

The event is scheduled for 11 a.m. Eastern Time on the issue date at George Washington’s Mount Vernon in Mount Vernon, Va., the official first-day city.

Mount Vernon is home to a 4-acre farm that is part of the George Washington estate.

“Modern visitors to the estate can see many of the same animals kept by George Washington in the 18th century,” according to the Mount Vernon website.

The Postal Service states that some of the livestock will be at the event, adding, “Heritage breeds of livestock take us back to our agricultural roots — and show the way to a more sustainable future.”

Registration for the event is taking place at the Postal Service website. The website includes an address for the ceremony location.

The Postal Service has resorted to virtual first-day ceremonies online for the past year in response to the COVID-19 pandemic.

The Heritage Breeds stamps initially appear to show basic farm animals in attractive single portrait photographs, but these are, in fact, distinct breeds of historic significance.

The name of each animal appears in red lettering directly below the photographic portrait, and “USA/FOREVER” is inscribed in smaller black letters at the bottom of the stamp.

On its website, the Livestock Conservancy describes heritage breeds as creatures of a bygone era.

“These breeds were carefully selected and bred over time to develop traits that made them well-adapted to the local environment and they thrived under farming practices and cultural conditions that are very different from those found in modern agriculture,” the organization said.

The Postal Service describes the stamp subjects as “pre-industrial farm animals that are enjoying renewed attention for their versatility, adaptability, and unique genetic traits.”

The 2021 Quarter 2 issue of USA Philatelic, the Postal Service’s catalog of current stamps and stamp products, mentioned Eliazarov’s efforts to photograph the animals, “often while lying in manure and muck to land the perfect shot.”

As seen on the stamps, Eliazarov’s photographs usually picture the animals with either a pale near-white background or a solid black background. On the stamp pane, these light and dark backgrounds alternate on every other stamp.

“All photographs are made in temporary studios built on the farm,” according to a description on her website. That comment refers to images in her book On The Farm, which includes more than 150 photographs and stories with a focus on rare and heritage breeds.

Eliazarov’s photography has been featured in numerous publications, including the Washington Post, New Republic and Food & Wine. She has also photographed cover stories for Modern Farmer magazine.

The stamp pane of 20 has an exterior border of dark green and a banner spelling out the title HERITAGE BREEDS.

The Postal Service notes that its offices will sell the stamps in fully intact panes, not individually.

The stamps also will be offered in press sheets of four panes (80 stamps) with die cuts and without die cuts. The press sheets are priced at $44, and orders are limited to five per item and are not available for presale, according to the Postal Service.

Each animal on the new stamps has characteristics that connect it to American farm animals from the nation’s early years.

“Heritage breeds are traditional livestock breeds that were commonplace on farms of the past,” wrote Regina Anneler for homestead.org. “This was before the rise of industrial agriculture drastically reduced the genetic variety and diversity of breeds for those of commercial breeds designed for mass production.”

Like many heritage breeds, the mulefoot hog is endangered, with only a few hundred animals remaining today. Named for the unusual characteristics of its hoof, which is not cloven, the large black hog is raised in conservation herds by dedicated farmers.

The Wyandotte chicken is a large bird found in colorful varieties.

“The hens are good mothers and egg producers. The eggs range in color from light to brown,” according to the Livestock Conservancy, which says the Wyandotte chicken is no longer considered endangered.

The red milking Devon cow is of medium size. It is referred to as an “ideal multipurpose breed” on the Cattle Site, which traces the breed’s history back to 1623, when two heifers and a bull from North Devonshire, England, were brought to the Plymouth colony.

The Narragansett turkey is named for the Rhode Island bay where the breed was developed.

“It was most likely developed from a cross-breeding between wild Native Eastern turkeys and Norfolk Blacks,” according to the Oklahoma State University Department of Animal Science. Severely threatened in the 1990s, the breed has made a limited comeback in recent years.

“The Mammoth Jack Stock was developed in the United States in its early years by George Washington,” according to Oklahoma State University. The tall donkey breed has distinct brown fur with a white muzzle and underbelly.

The medium-size cotton patch domestic goose received its name from its “weeding” of cotton fields in the American South. The bird has pale blue eyes and pinkish bill and feet. The purest examples of the breed are quite rare, and conservation of the cotton patch goose continues.

Another endangered species is the San Clemente Island goat which, as its name suggests, originated as a feral animal on the island off the Southern California coast.

According to the Rosamond Gifford Zoo in Syracuse, N.Y., this goat breed is “critically endangered due to eradication from their home island and a lack of familiarity with their breed among most farmers.”

The American Cream Draft Horse Association describes the horse it represents as having a cream coat, pink skin and amber eyes. As draft animals were replaced by tractors, these large horses declined in numbers, and efforts by the association to preserve them continue.

The Cayuga duck is all black with a green iridescence; even its bill and feet are black, and its eggs are also black or dark in color. Originally raised for meat, the duck today has improved upon its endangered status.

Four ewes and one ram of the Barbados blackbelly sheep were originally introduced into the United States by the U.S. Department of Agriculture in 1904, according to Oklahoma State University. The animal’s coat is a medium to thick covering of hair (no wool). Selective crossbreeding resulted in a variety known as the American blackbelly.

Although these 10 animal breeds are all new to U.S. stamps, distant cousins of each have been seen on stamps, such as the wild turkey on the 1956 3¢ Wildlife Conservation stamp (Scott 1077), and the many U.S. Lunar New Year stamps commemorating the Year of the Goat, the Year of the Rooster and the Year of the Pig.

Two pictorial first-day cancels for the Heritage Breeds stamps are available from the Postal Service, one in black and the other in multiple colors. Although the designs of the two postmarks differ, each shows a stylized image of grain.

The black postmark most commonly is applied to collector-supplied envelopes. Both are found on plain-envelope first-day covers created and sold by the Postal Service.