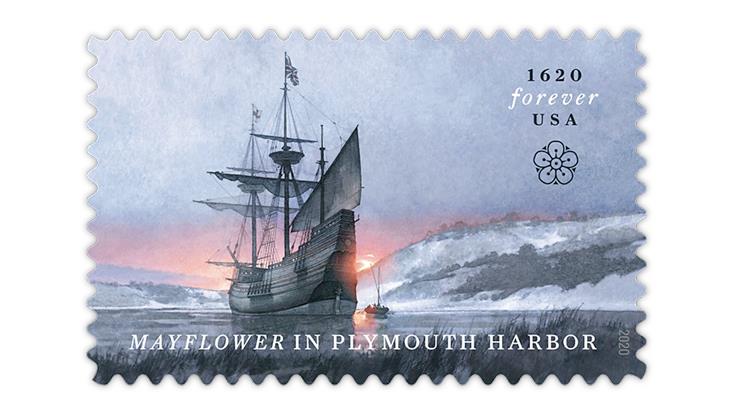 A United States forever stamp will be issued Sept. 17 to commemorate the 400th anniversary of the arrival of the English merchant ship Mayflower in Plymouth Harbor in 1620. Greg Harlin created the original artwork. 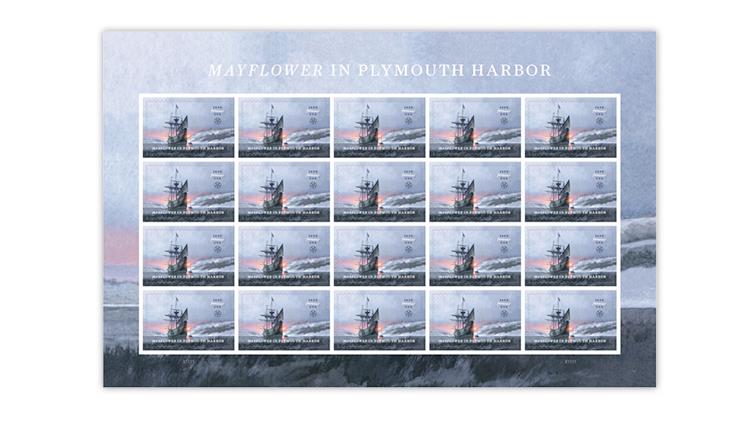 The arrangement of the 20-stamp pane of the horizontal Mayflower in Plymouth Harbor forever stamp is somewhat unusual. By positioning five stamps across, the Postal Service has created a pane that is wider than normal. 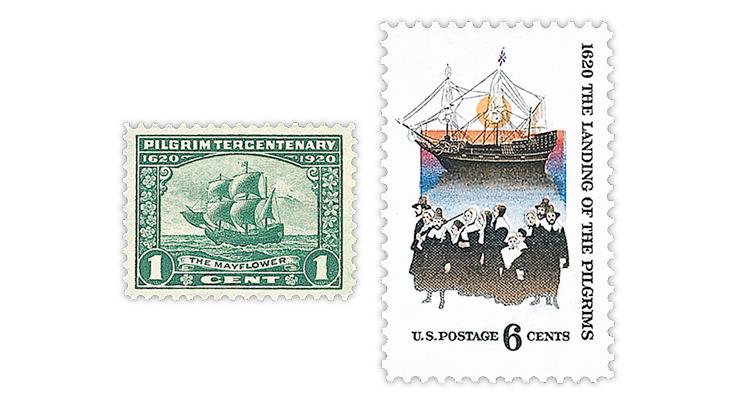 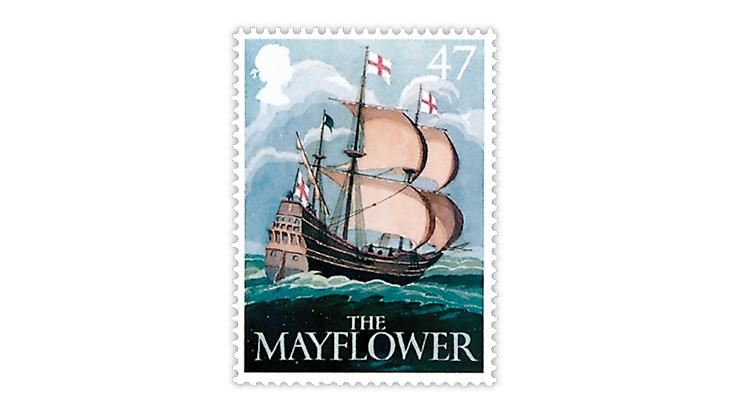 Great Britain has also issued stamps that commemorate the Mayflower. This 2003 stamp celebrates the vessel as it appears on a pub sign. 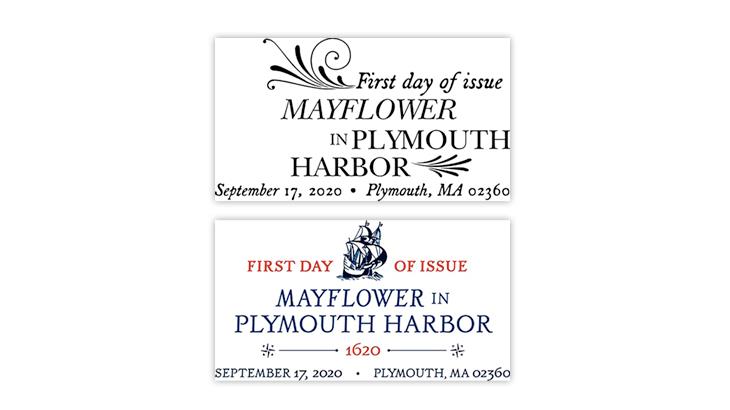 Pictorial postmarks for the Mayflower in Plymouth Harbor forever stamp first day of issue have been prepared in black and in color. The color postmark shows the image of the famous ship.
Previous
Next

A new United States forever stamp commemorates the 400th anniversary of the arrival of the Mayflower in Plymouth Harbor. The nondenominated (55¢) stamp, designed by U.S. Postal Service art director Greg Breeding, reproduces original artwork by Greg Harlin that shows the English merchant ship in the harbor at sunset. It will be issued Sept. 17 in panes of 20.

The stamp design and its inscriptions are offset-printed by Ashton Potter, but the design also includes an intaglio-printed floral element that the Postal Service describes as representing a stylized hawthorn flower.

“In England, the hawthorn — a member of the rose family — is sometimes called a mayflower, as it blooms in May,” according to the Postal Service.

Intaglio printing is often referred to as engraving by collectors, as the process reproduces images originally engraved or etched onto a plate. It was once the most common form of U.S. stamp printing, but it fell out of favor with the Postal Service, which today relies mostly on the less expensive multicolor offset printing method.

The hawthorn insignia is positioned on the new stamp below the inscriptions “1620,” “forever” and “USA,” which are stacked in the upper right corner of the design.

The floral element was added sometime after the stamp design was first revealed in October 2019.

The Postal Service described Harlin’s painting as a combination of watercolor, acrylic and gouache (a method of painting that uses opaque pigments ground in water and thickened to a gluelike consistency).

“The painting was digitally refined to convey a scene of desolate beauty at the end of the Pilgrims’ long journey to an unfamiliar world,” according to the Postal Service.

The issue title is lettered in white on the selvage across the top of the pane.

As Linn’s reported previously, the Postal Service has also prepared a book about the Mayflower voyage that will be sold separately to coincide with the stamp issue. Packaged with the book is a set of five progressive stamp proof panes, the finished stamps in a pane of 20, and a numbered certificate of authenticity (Linn’s, Aug. 10, page 8).

Although it was neither the first arrival in the Americas by Europeans nor the first European settlement in America, the 1620 pilgrim landing at Plymouth holds an iconic status in U.S. history. For many it represents the establishment of religious freedom in the New World, as the Pilgrims sought to escape the persecution they suffered in England because of their choice to separate from the Church of England.

It is also symbolic of the popular American Thanksgiving holiday, which recalls the 1621 harvest feast shared by the colonists and the Wampanoag people native to the region where the Pilgrims settled.

The Pilgrims left England in 1607 to establish their congregation in the Netherlands, but left there in 1620, dissatisfied with the society and culture in which they were immersed.

They returned to England as they made preparations for a voyage to establish a new colony in America.

The Mayflower was hired for the journey, along with the ship’s master Christopher Jones and a crew numbering some 30 men or more. Thirty-seven Pilgrims were among the 102 passengers on the voyage, which also included servants, farmers and hired hands. Small farm animals were also brought on board, making for an unpleasant gathering in close, dark and cold quarters.

The ship departed the port of Plymouth in Devon, England, on Sept. 6, 1620, undertaking a perilous ocean voyage that would last 10 weeks.

The English colony in Virginia at Jamestown had been established some dozen years earlier, and the Mayflower Pilgrims intended to sail north of the Virginia colony, but they arrived near Cape Cod, hundreds of miles north of their intended destination.

The ship anchored at Provincetown Harbor on Nov. 11. The men on board worked out an agreement known today as the Mayflower Compact to keep peace and order in what would be a completely new and unfamiliar social environment. The agreement has since been compared to the U.S. Declaration of Independence and the nation’s Constitution.

After multiple landing parties explored the area in search of a suitable place to establish the colony, the Mayflower sailed across the bay to Plymouth Harbor, arriving Dec. 16.

Though 50 settlers died during the harsh winter that followed, the new colony was successful’ and the port of Plymouth, named by the Pilgrims for their departure point, prospered.

One hundred years ago, the U.S. Post Office Department celebrated the Pilgrims’ journey on a set of three stamps known as the Pilgrim Tercentenary issue (Scott 548-550) designed by Clair Aubrey Huston (1857-1938). The 1¢ green stamp from that set depicts the Mayflower on calm waters, not in the treacherous seas that the colonists experienced for much of the journey.

In 1970 a single multicolor 6¢ commemorative marked the 350th anniversary of the Plymouth landing, with an illustration by Mark English (1933-2019) of the Pilgrims onshore and the Mayflower in the background (Scott 1420).

Both the 1920 and 1970 tributes have unusual characteristics that the new stamp seems to have avoided.

Writing about the 1920 set for the Smithsonian National Postal Museum, Roger S. Brody pointed out: “So well known was the story of the Pilgrims landing at Plymouth that the stamps did not include the country of origin. These were the only [U.S.] stamps ever issued without the words ‘United States’ or the U.S. initials.”

A tiny element of the 1970 stamp was identified by a 16-year-old in Rhode Island as a design error, and the story was reported by The New York Times in its Dec. 6, 1970, issue.

While closely examining the stamp, young Robert W. Turner noticed that the Union Jack flying on the Mayflower in the design of the 6¢ stamp was the same as today’s Union Jack, the flag representing the United Kingdom. However, prior to 1801, that flag did not have the diagonal red Irish cross of St. Patrick, which the 6¢ stamp did include.

The artist and the Post Office Department both expressed regret for the flag error, but the issued stamp was not withdrawn or reprinted.

The new forever stamp shows the ship flying the Union Jack as it appeared in 1620, without the red Irish cross of St. Patrick.

The story of the Mayflower is so prominent in Colonial American history that it has been portrayed on stamps of other nations.

Great Britain’s Royal Mail issued a stamp in 1970 denominated 1 shilling, 6 penny that shows the Mayflower (flying the Union Jack from the proper era) and a small number of Pilgrim colonists (Scott 615).

A more dramatic portrayal of the Mayflower at sea is found on a 47p stamp issued in 2003 as part of a set of five depicting pub signs (Scott 2151).

There has been no announcement of a British Mayflower commemoration in 2020, but the Isle of Man, a British crown dependency with its own postal system, issued a set of six stamps April 22 that includes a painting of the Mayflower sailing in rough seas, and commemorates other key events in the Pilgrims’ story.

Denise McCarty reported on this new issue in her New Stamps of the World column (Linn’s, May 4, page 12).

The Postal Service prepared two pictorial first-day cancels for the Mayflower in Plymouth Harbor forever stamp. The black cancel, which is applied to most requests, features filigree style ornaments and text, including the full name of the stamp issue, the issue date and location.

The color cancel also consists mostly of text, but it includes a small image of the ship at the top of the postmark between the words “FIRST DAY” and “OF ISSUE.”

Up to 50 black postmarks can be requested on collector supplied envelopes at no cost. Digital color postmark requests require a fee of 50¢ per postmark with a minimum order of 10. Two test envelopes must be included as well.