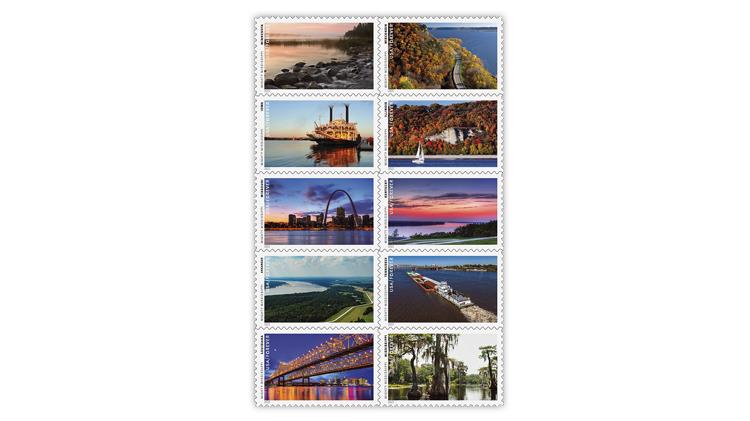 Colorful photographs taken along the 2,340-mile length of the Mississippi River are pictured on 10 United States commemorative forever stamps to be issued May 23 at Beale Street Landing in Memphis, Tenn. 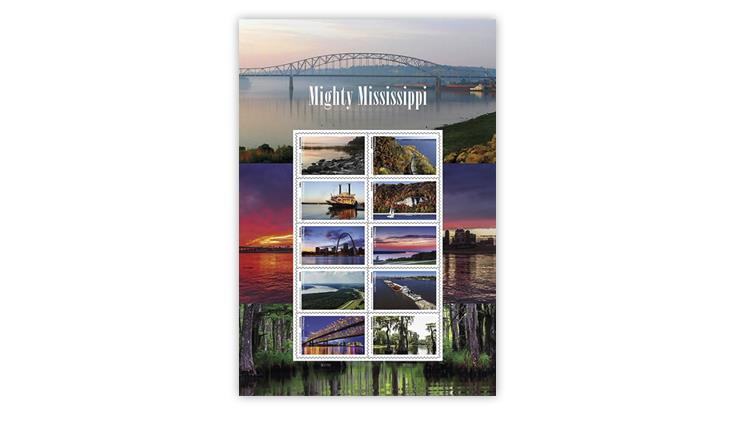 The selvage of the Mighty Mississippi pane of 10 shows three photographs. Pictured from top to bottom are the Julien Dubuque Bridge, the skyline of St. Louis, and a Mississippi bayou. 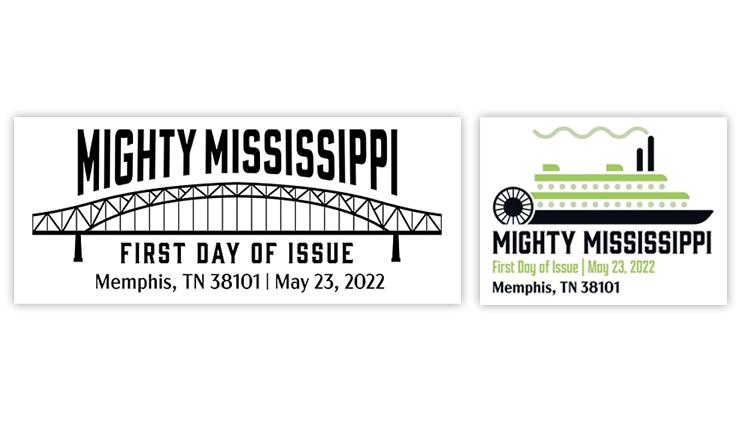 The black pictorial first-day postmark for the Mighty Mississippi stamps pictures a bridge. A stylized paddle wheel steamboat with smoke streaming from one of its smokestacks is shown on the digital color postmark.
Previous
Next

Sometimes called America’s backbone, the Mississippi River is being celebrated on 10 United States commemorative forever stamps that will be issued May 23 in Memphis, Tenn.

The nondenominated (58¢) Mighty Mississippi stamps feature photographs that each represent a different state along the river’s 2,340-mile length that stretches from remote Lake Itasca in northern Minnesota to the Gulf of Mexico.

An official first-day ceremony, which is free and open to the public, is scheduled for 11 a.m. Central Daylight Time at Beale Street Landing, 251 Riverside Drive, in Memphis. The landing is a scenic river cruise dock that opened in 2014.

Collectors desiring to attend the ceremony are encouraged to register online.

When the Mighty Mississippi stamps were first announced as part of the 2022 U.S. stamp program in early November 2021, the USPS said the format would be a pane of 20. However, the Postal Service’s technical details state the stamps were printed in panes of 10.

The Postal Service tapped Ashton Potter USA Ltd. in Williamsville, N.Y., to print 40 million Mighty Mississippi stamps that were finished into 4 million panes of 10 for sale at post offices. In addition to the panes, the USPS will offer uncut press sheets.

As shown on the U.S. Postal Service’s preliminary artwork for the stamps, the states represented in each row of two stamps in the vertical block of 10 are (from top to bottom) Minnesota and Wisconsin, Iowa and Illinois, Missouri and Kentucky, Arkansas and Tennessee, and Louisiana and Mississippi.

“At the point where the Mississippi reaches the Gulf of Mexico, the trickle that started in Lake Itasca has intermingled with waters from 31 states,” the Postal Service said.

Dana Holm’s photo of Lake Itasca is seen on the Mighty Mississippi stamp for Minnesota. Wisconsin’s stamp features Jay Olson-Goude’s picture of an autumn view of the Great River Road.

On the stamp for Iowa, the steamboat American Queen is seen near Bettendorf, Iowa, in a photo by David Sebben. Walter Blackledge’s photo on the stamp for Illinois shows a sailboat gliding past a limestone cliff wreathed in fall foliage.

A dramatic photo by Evan Spiler on Missouri’s stamp captures the Gateway Arch set against the St. Louis skyline at sunset. The stamp representing Kentucky features Larry Braun’s picture of the city of Wickliffe, located just south of the confluence of the Ohio and Mississippi rivers.

A Mississippi River Parkway Commission photo of a curved levee flanked by a forest and farmland is shown on the Mighty Mississippi stamp for Arkansas. M.J. Scanlon’s picture on Tennessee’s stamp features a towboat pushing a massive array of barges upriver with the Memphis skyline off in the distance.

A photo by Sean Pavone of the brightly lit skyline of New Orleans and the twin Crescent City Connection bridges graces the stamp for Louisiana, while Ron Levine’s picture on Mississippi’s stamp showcases a delta bayou dotted with cypress trees draped with Spanish moss.

Three photographic riverscapes are illustrated on the decorative selvage (margin paper) surrounding the 10 Mighty Mississippi stamps. From top to bottom, the photos show the Julien Dubuque Bridge that spans the Mississippi River to connect Dubuque, Iowa, and East Dubuque, Ill.; the skyline of St. Louis set against a multicolored cloudy sky; and a bayou in Mississippi. “Mighty Mississippi” is lettered across the top selvage.

On the back of the pane (not shown) is a map of the central United States that shows the course of the river and its major tributaries, according to the Postal Service.