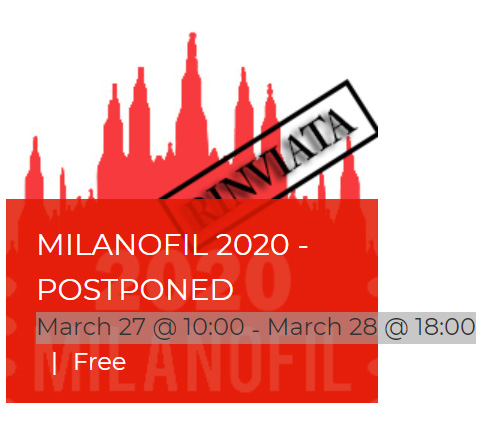 The Milanofil 2020 stamp show scheduled for March 27-28 in Milan, Italy, was postponed due to the coronavirus outbreak in Italy. This graphic is from the website of Italy’s Unificato stamp catalogs.

A stamp show in Milan, Italy, is among the events that have been postponed because of the coronavirus (COVID-19) outbreak in the Lombardy region in northwestern Italy.

Notices on the websites of Italy’s Unificato stamp catalogs and the Italian National Association of Philatelic Professionals (Associazione Nazionale Professionisti Filatelici) announced the postponement of the Milanofil 2020 stamp show.

The show had been scheduled to take place March 27-28 in Milan. New dates have not yet been announced.

Post offices in some of the 10 municipalities in Lombardy and one in the neighboring region of Veneto were closed when the municipalities were placed under quarantine in late February. Five were scheduled to reopen on March 2.

Milan, the capital of Lombardy, was not one of the cities under quarantine, although numerous public events were canceled.

As of late February, Italy had the most reported cases of the coronavirus of any country outside Asia. According to Italy’s Ministry of Health, as of Feb. 28, 888 people in Italy had tested positive for the coronavirus (531 of these were in the Lombardy region), 21 were deceased and 46 were healed.