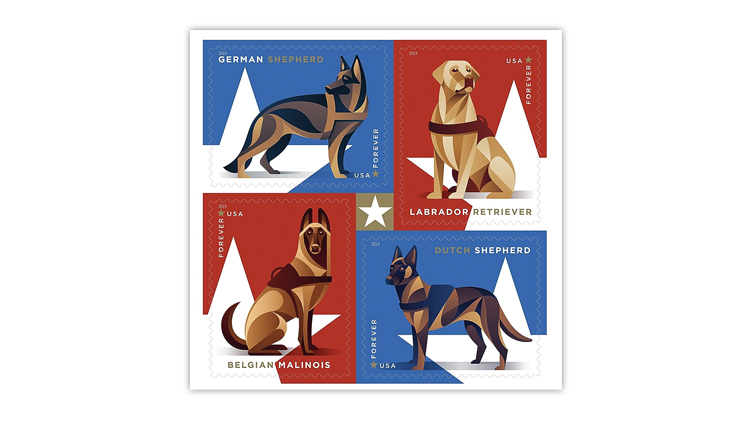 Four United States commemorative forever stamps honoring working dogs of the U.S. military will be issued Aug. 1 in Omaha, Neb. The four breeds shown in the stylized illustrations are the German shepherd, the Labrador retriever, the Belgian Malinois and t 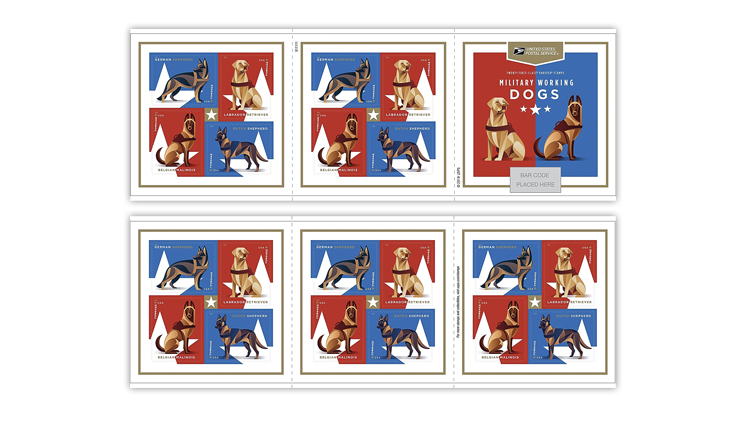 The United States Military Working Dogs commemorative set of four will be issued in double-sided panes of 20, with each stamp included five times in the pane. Stars appear as an element in each illustration and in the center of each stamp block. 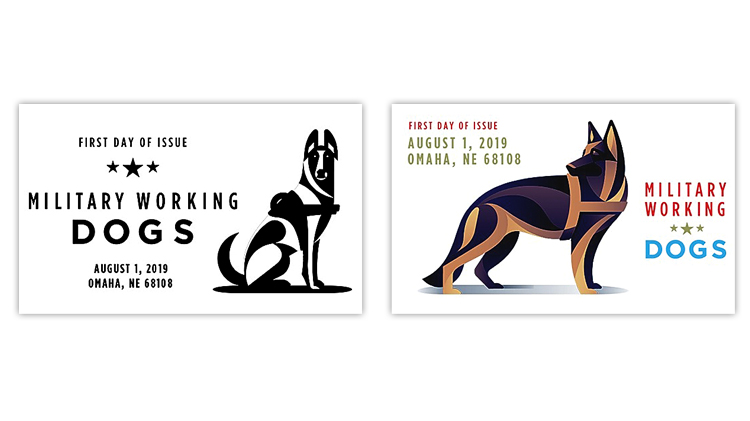 Two pictorial first-day cancels for the Military Working Dogs stamps each show one dog as depicted on one of the four stamps. The black postmark features the Belgian Malinois, and the German shepherd is depicted on the color postmark. 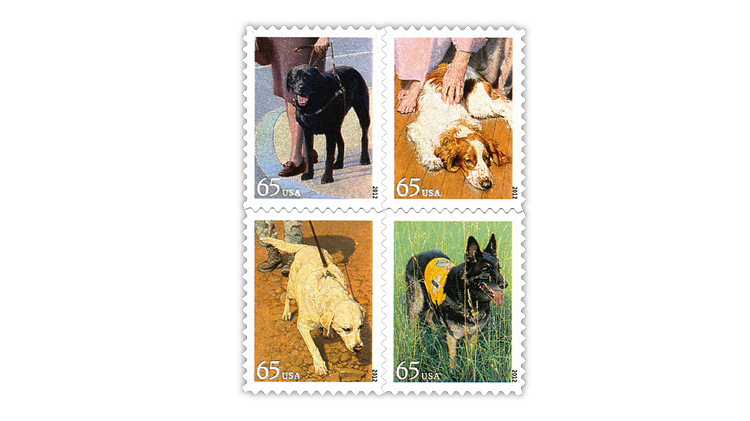 Dogs have long been a popular topic for stamps of the United States and other countries. The U.S. Dogs at Work set of four 65¢ stamps issued Jan. 20, 2012, includes a Labrador retriever working with a military handler on the stamp at lower left.
Previous
Next

The ceremony will take place on the opening day of APS Stampshow, the American Philatelic Society’s annual summer convention and exhibition, which is being held this year in association with the National Topical Stamp Show sponsored by the American Topical Association.

The stamp show and the ceremony are both free and open to the public. The U.S. Postal Service encourages online advance registration for the ceremony.

David C. Williams, vice chairman of the U.S. Postal Service board of governors, will dedicate the new issue.

The stamps are being issued in a double-sided pane of 20, which the Postal Service describes as a booklet.

The design of each stamp is a stylized illustration depicting one of four dog breeds serving today in the U.S. armed forces: the German shepherd, the Labrador retriever, the Belgian Malinois and the Dutch shepherd.

“The background of each stamp features a detail of a white star,” the Postal Service said. “A star appears in the center of each block. The stylized digital illustrations are in red, white, blue, and gold to represent the American flag and patriotism. The art was created by DKNG Studios.”

Each stamp is inscribed with the name of the dog shown, along with “USA” and “FOREVER.” The issue title, “MILITARY WORKING DOGS,” appears only on the large label that serves as the booklet cover if the pane is folded.

“Dozens of dog breeds have served in the U.S. armed forces, but over time the number has decreased significantly,” according to the Postal Service. “Modern military working dogs are predominantly Belgian Malinois, German Shepherds and Dutch Shepherds. Labrador Retrievers are often trained as specialized search dogs.

According to information on the website of the U.S. Air Force’s 37th Training Wing, dogs are trained at the 341st Training Squadron for patrol, drug and explosive detection, and for specialized mission functions for the Department of Defense and other government agencies.

When their service is completed, the dogs are often adopted by their handlers, but some work with civilian law enforcement agencies, while others are adopted by individuals or families among the general public.

The Postal Service has prepared two pictorial first-day cancels for the new Military Working Dogs stamp set. Each postmark shows one of the four dogs in the same pose in which they are depicted on the stamps.

The black postmark features the Belgian Malinois, and the color postmark shows the German shepherd. These postmarks will be used on first-day covers produced and sold by the Postal Service.

Dogs are a popular topic on stamps in the United States and worldwide. A dog is shown at the feet of one of the friars in the vignette of the 1893 30¢ orange-brown Columbus at La Rabida stamp (United States Scott 239).

Another dog is less prominent but still visible sitting with a farmer on a buckboard on the 2¢ copper-red Farming in the West stamp from the 1898 Trans-Mississippi Exposition set (Scott 286).

The other three stamps depict a guide dog, a therapy dog and a rescue dog.