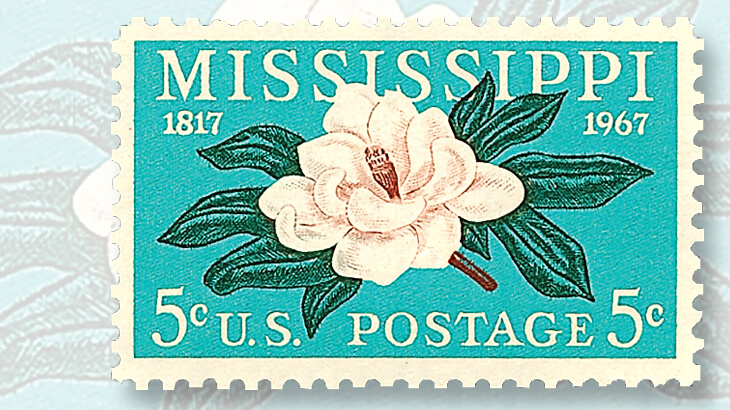 Mississippi statehood was previously celebrated 50 years ago with a 5¢ stamp depicting a magnolia, the official state flower. 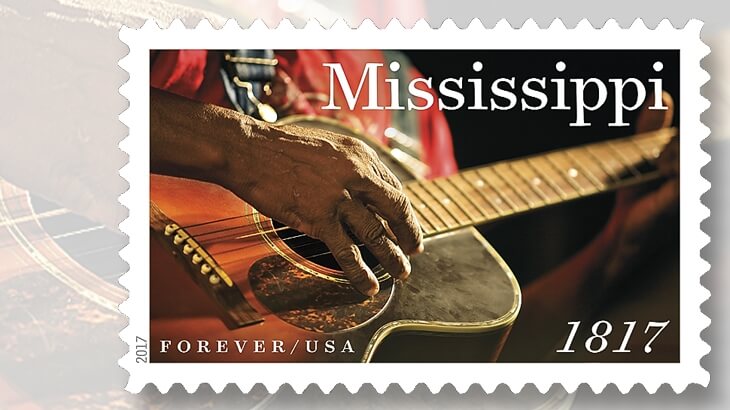 The new Mississippi Statehood forever commemorative stamp features a photograph of a musician playing an acoustic guitar. The stamp celebrates the 200th anniversary of statehood. 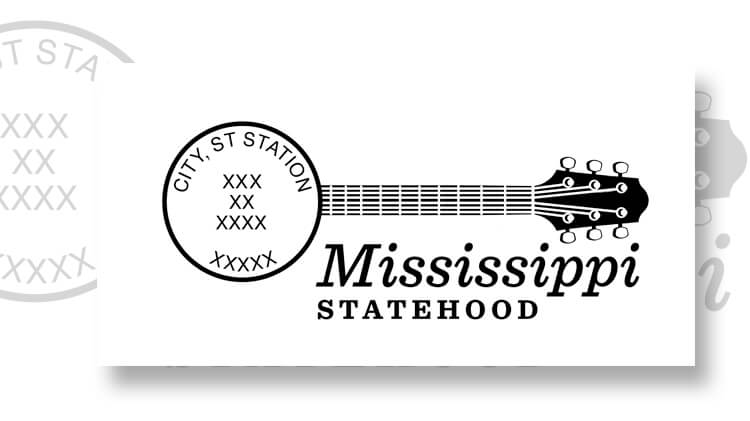 Post offices in Mississippi may choose to use this pictorial postmark for a limited time. It is not the official first-day postmark. 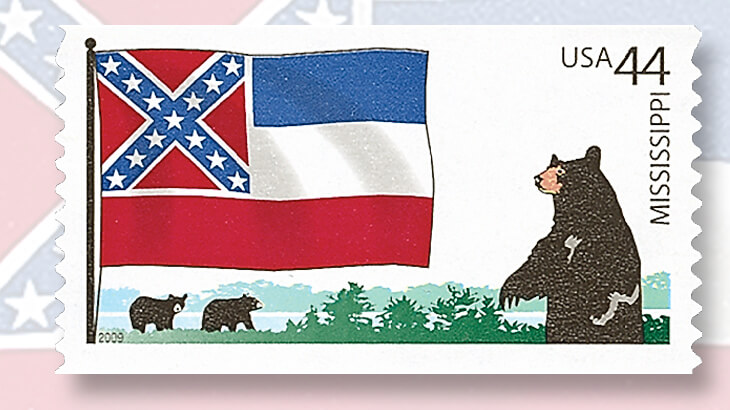 Black bears are featured with the Mississippi state flag on this 44¢ coil stamp issued in 2009 as part of the Flags of our Nation series. 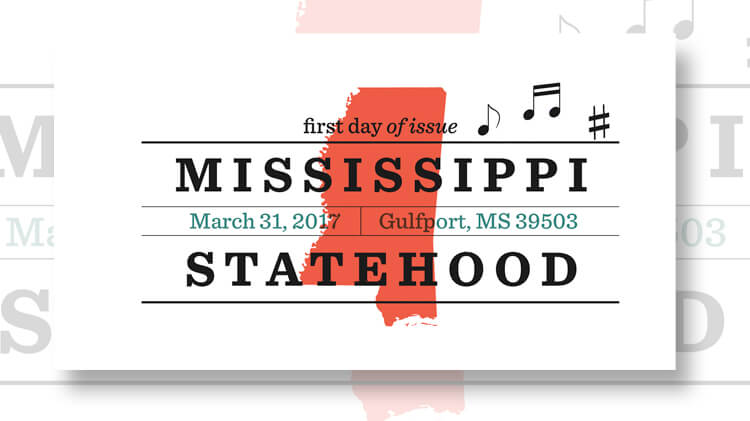 A digital color postmark created for the Mississippi Statehood forever stamp features musical notation and a map of the state.
Previous
Next

The state of Mississippi is celebrating 200 years of statehood, and the United States Postal Service is joining in with a new forever stamp to mark the occasion.

The nondenominated (49¢) Mississippi Statehood commemorative stamp will be issued in a pane of 20 on March 31 as part of the South Mississippi Bicentennial Celebration.

The first-day ceremony is scheduled for 11 a.m. at Centennial Plaza, 200 E. Beach Blvd., in Gulfport, Miss.

The Mississippi Statehood stamp design features a photograph of a musician’s hands as he plays a six-string acoustic guitar. The photograph was taken by Lou Bopp in 2009, according to the Postal Service.

“Mississippi is the birthplace of many legendary blues artists who created a uniquely American genre of music,” the Postal Service notes.

“Northwest Mississippi’s Delta is famous as the birthplace of the Delta blues, a uniquely American musical genre that grew out of traditional African-American work songs. Many of the state’s sons and daughters have scaled the heights across a range of other musical genres as well, from country to opera to rock and roll.”

One of America’s earliest blues icons and among the most respected blues musicians of all time, Robert Johnson, was born in Hazelhurst, Miss., in 1911. Johnson was honored on a 29¢ stamp issued Sept. 17, 1994 (Scott 2857).

Arthur Crudup was born six years earlier in Forest, Miss., and the legendary Bo Diddley was born in McComb in 1928.

John Lee Hooker was born in Glendora or Tutwiler in 1912, and the great Muddy Waters was born in rural Issaquena County around 1913; both men are also associated with Clarksdale, which today is home to the Delta Blues Museum.

B.B. King was born outside of Berclair, Miss., in 1925, and later lived and worked as a tractor driver in nearby Indianola. His mother’s cousin, Bukka White, also was a blues guitarist, born in Aberdeen in 1909.

The Velvet Bulldozer, Albert King, was born Albert Nelson in 1923; the left-handed king of the Flying V guitar claimed Indianola as his birthplace, and was known to suggest he was distantly related to B.B. King.

The list of other famous musicians from Mississippi is almost endless, but it also includes the father of country music, Jimmie Rodgers, born in Meridian in 1897; country singer Tammy Wynette, from Tremont in 1942; singer-songwriter Jimmy Buffet, born in Pascagoula in 1946; and a fellow who came to be known as the king of rock ‘n’ roll: Elvis Presley, born in Tupelo in 1935.

“On Dec. 10, 1817, Mississippi became the 20th state in the Union,” the Postal Service notes in its publicity announcement for the stamp.

“Known as the Magnolia State, the state is named for the Mississippi River, which runs along its western border. Among U.S. states, the Magnolia State is 32nd in size, and with approximately three million people, it ranks 31st in population.

“Mississippi has given America famous writers, athletes and actors, but possibly its best known export is its musical talent.”

The Mississippi Territory was established April 7, 1798, comprising a region that today would combine most of the southern sections of Mississippi and Alabama.

A 3¢ stamp marking the 150th anniversary of the establishment of the Mississippi Territory was issued April 7, 1948 (Scott 955).

The territory later grew both to the north and the south, and then divided in 1817 into what would become the state of Mississippi to the west, and the Alabama Territory to the east.

Alabama would achieve statehood in 1819, but the law declaring Mississippi a state was enacted two years earlier.

The first postal commemoration of Mississippi statehood came on a 5¢ stamp issued Dec. 11, 1967, on the 150th anniversary (Scott 1337). The design features a magnolia, the official state flower.

The most recent commemoration specific to the state came in 2009, with a 44¢ coil stamp showing the Mississippi state flag and black bears (Scott 4300), part of the Flags of our Nation stamp series.

The state has three breeding subpopulations of black bears, according to the Mississippi Department of Wildlife, Fisheries and Parks.

The Postal Service will issue an undisclosed quantity of Mississippi Statehood stamp press sheets consisting of six die-cut panes of 20 (120 stamps), and selling for face value at $58.80.

A digital color first-day cover for the new stamp will feature mostly text in black and green, with the state of Mississippi represented in the background as a map in a shade of orange red. Musical notation is seen at upper right.

However, Mississippi post offices have the option of ordering a pictorial cancel that features a circular marking at left, and the neck and headstock of a six-string guitar at right.

If that postmark is used by any Mississippi cities, the information will be listed in an upcoming Postmark Pursuit column in Linn’s.

Technical details and first-day cancel ordering information for the Mississippi Statehood forever stamp can be found below.

Standard ordering instructions apply. Collectors requesting first-day cancels are encouraged to purchase their own stamps and affix them to envelopes. The first-day cover envelopes should be addressed for return (a removable label may be used), and mailed in a larger envelope addressed to FDOI — Mississippi Statehood Stamp, USPS Stamp Fulfillment Services, 8300 NE Underground Drive, Suite 300, Kansas City, MO 64144-9900.

Requests for first-day cancels must be postmarked by May 31.

The Postal Service’s uncacheted first-day cover for the Mississippi Statehood stamp is USPS item No. 474816 at 93¢. USPS item numbers for stamps and FDCs also appear in Linn’s 2017 U.S. Stamp Program.

When the USPS Northern Cardinal stamped envelope was actually issued