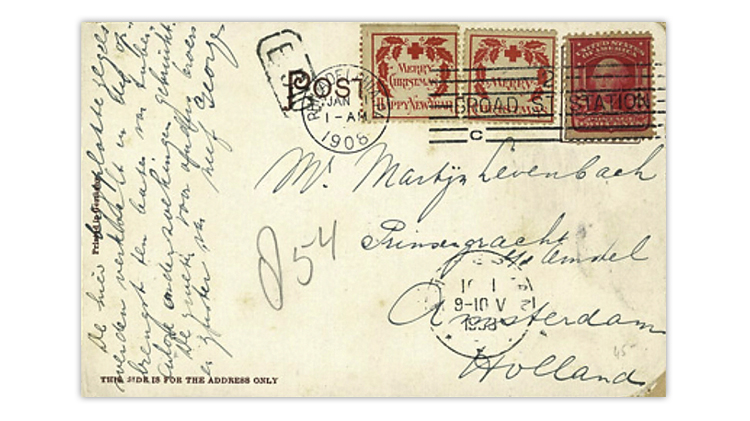 One cover is known with both types of 1907 Christmas seals. This postcard was sent in 1908 from Philadelphia to the Netherlands. It was discovered in 2010 and purchased for $63. Two years later, it sold at auction for more than $6,700.

Tied Christmas seals — those that are canceled along with the stamp — are desirable collectibles in the seal collector community. These tied seals are almost always on postcards.

Among the most sought-after tied seals are those from 1907, the year Christmas seals were introduced in the United States.

There are two versions of the 1907 seal. The first, type 1 (Scott Wx1), simply reads “Merry Christmas.” It was introduced Dec. 7, 1907, in Wilmington, Del., and was also sold in Philadelphia, Pa. Immediately popular, it sold out within a few weeks.

The sponsors then redesigned the seal, this time with the inscription “Merry Christmas” and “Happy New Year.” This updated version, type II (Scott WX2), was released Dec. 23, 1907.

George Painter of the Christmas Seal and Charity Stamp Society keeps a running census of these seals. According to the census, there are 83 examples of the 1907 type I on cover, and 35 of type II. It isn’t unusual to see them go for $1,000 and up when they offered.

This postcard is shown here. Addressed to a recipient in Amsterdam, the card was canceled Jan. 1, 1908, in Philadelphia. In addition to the two seals, it bears a 1903 2¢ carmine George Washington stamp (Scott 319).

Lehmann sold the cover at a Spink Shreves Galleries auction two years later for a little more than $6,700, including the hammer price plus buyer’s fees.

So, as you poke through old postcards, keep an eye out. Another 1907 combination covers might be waiting to be discovered.