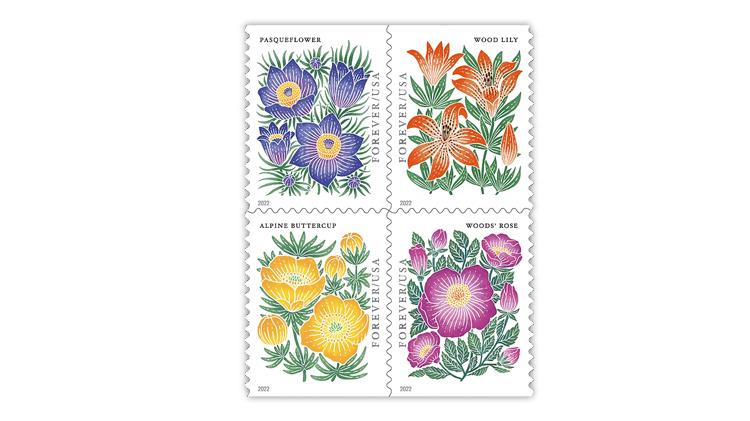 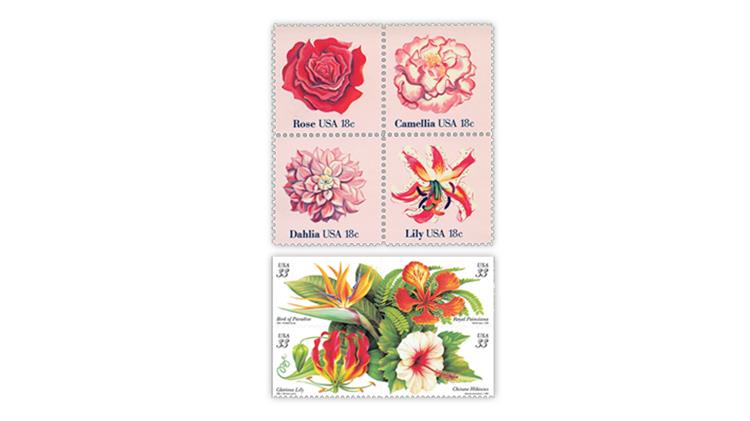 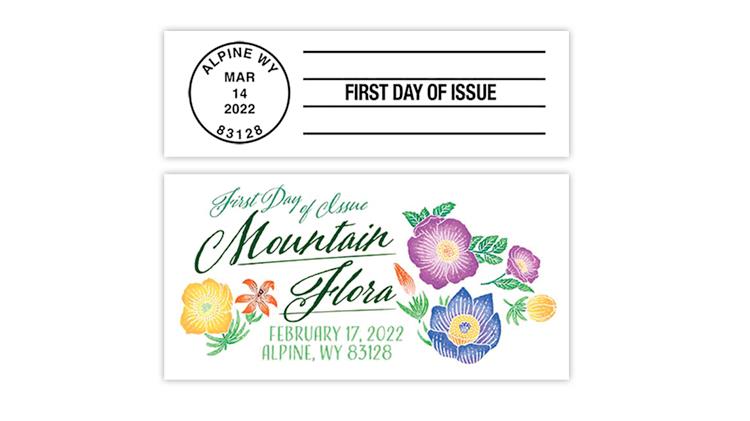 Two first-day postmarks are available for the Mountain Flora stamps. One is the traditional black four-bar cancel with the words “FIRST DAY OF ISSUE” centered between the bars. The full color pictorial postmark illustrates all four flowers featured on the
Previous
Next

Colorful mountain flowers are the subject of four definitive stamps the United State Postal Service will issue March 14 in Alpine, Wyo., without an official first-day ceremony. The stamps will go on sale nationwide the same day.

According to the Postal Service, the stamps are to be issued in three formats: a double-sided pane of 20 (which the USPS calls a booklet) and coil rolls of 3,000 and 10,000.

A detail from the Pasqueflower stamp is printed on the label on the double-sided pane of 20, the Postal Service said.

The large rolls of coil stamps are primarily intended for use by mailers who send large quantities of first-class mail.

There likely will be gaps between each stamp in a roll, and the stamps will be on backing paper taller than the stamps. These features allow the use of automated equipment to affix the stamps to large quantities of mailpieces in a short period of time.

Based on the issue formats, it is likely that eight Scott catalog numbers will be assigned to the Mountain Flora stamps: four for the stamps in double-sided panes of 20 and four for the coil stamps in rolls of 3,000 and 10,000.

A final catalog listing determination will not be made until Scott editors have examined the actual stamps.

Postal Service spokesman Jim McKean told Linn’s Stamp News that the Mountain Flora coil stamps are horizontal in format, meaning they will have vertical serpentine die cuts at left and right and straight edges at top and bottom.

As a service to collectors, the Postal Service’s Stamp Fulfillment Services mail-order center in Kansas City, Mo., will offer both formats of the Mountain Flora coil stamps in strips of 500 and strips of 25 with plate number. The item numbers for these smaller multiples are listed in Linn’s 2022 U.S. stamp program.

Lili Arnold of Felton, Calif., created original hand-drawn illustrations for the Mountain Flora stamps. Her drawings were then refined digitally to create what the Postal Service calls a “block-print aesthetic.” Ethel Kessler served as both art director and designer.

Illustrated here is the Postal Service’s preliminary artwork for a block of four Mountain Flora stamps from a double-sided pane.

The name of each flower is printed in small capital letters at the top of each stamp. “FOREVER/USA” is lettered up the left side (wood lily and Woods’ rose) or right side (pasqueflower and alpine buttercup), and the “2022” year date appears in the bottom left corner.

Each design is set against a white background and features a cluster of four, five or seven flowers along with stems and leaves. Some of the blossoms are closed, while others are either partially or fully opened.

Pasqueflowers tend to bloom early in spring. Of the roughly 30 species in the Pulsatilla genus, the European pasqueflower (Pulsatilla vulgaris) is the most frequently encountered in gardens. The pasqueflower also goes by the names wind flower, meadow anemone and Easter flower.

Wood lilies (Lilium philadelphicum) feature bright red orange flowers with purple spots. Their stalks range in height from 1 foot to 3 feet. An individual stem can hold from one to five funnel-shaped flowers.

The Alpine buttercup (Ranunculus adoneus) thrives at high elevations and is typically found in grassy meadows. The flower is a common sight in the Rocky Mountains of Colorado and Wyoming.

Also known as the western wild rose, the Woods’ rose (Rosa woodsii) is a variable species consisting of numerous varieties that can be found throughout the western United States. The pink flowers have five petals and are 2 inches across in full bloom.

Flowers have appeared on dozens of U.S. stamps over the years, and stamps picturing flowers have long been popular with the mailing public.

All of the Mountain Flora stamps were printed on nonphosphored paper with block tagging.

A plate number consisting of a “P” followed by four single digits will appear on every 27th Mountain Flora coil stamp below the stamp image, the USPS said. The “P” is shorthand for Ashton Potter, and each digit represents one of the four process colors — cyan, magenta, yellow and black — used to print the stamps.

Full color pictorial first-day cancels found on covers marketed by the Postal Service and others prepared by some cachetmakers will illustrate all four flowers along with decorative script text spelling out “Mountain Flora.”

All orders for Mountain Flora first-day cancels must be postmarked by July 14.