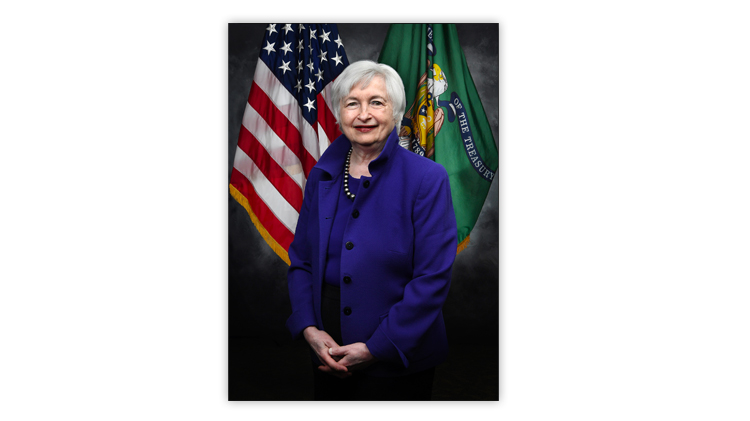 Despite belief in some philatelic circles, United States Secretary of the Treasury Janet Yellen is not a stamp collector. Image courtesy of the U.S. Treasury Department.

The Wall Street Journal has killed another Washington, D.C., myth, namely that United States Secretary of the Treasury Janet Yellen is an avid stamp collector.

Not so, the Journal said in a Sept. 15 article that recounted some of the stamps she has been given in the “widespread belief” she was a collector.

While she was chair of the Federal Reserve Bank, Yellen was invited to join the elite Club de Monte-Carlo that counted Queen Elizabeth II and Prince Albert of Monaco among its 100 members, the newspaper said.

She declined to join, saying in a 2017 letter that she had inherited her mother’s stamp collection as a child but had not had time to pursue the hobby.

“I’ve not had the time for many, many years to develop the collection or to be actively involved in philately,” the Journal quoted Yellen as saying in her letter to the club.

“My professional activities in economics and finance have absorbed all of my time and attention,” she said.

The Journal said the belief that she was a collector may have grown from financial disclosure forms that listed her mother’s stamp collection as valued at between $15,001 and $50,000.

The newspaper said Yellen had become accustomed to receiving stamps as gifts from foreign diplomats.

She declined to be interviewed by the Journal.

Her brother, John Yellen. offered a less positive view of the issue.

“Stamps really don’t mean anything to Janet at all,” he told the Journal.

“That collection is basically forgotten. It’s sitting in a safe deposit box. … I guess at some point it will be passed down,” he said.