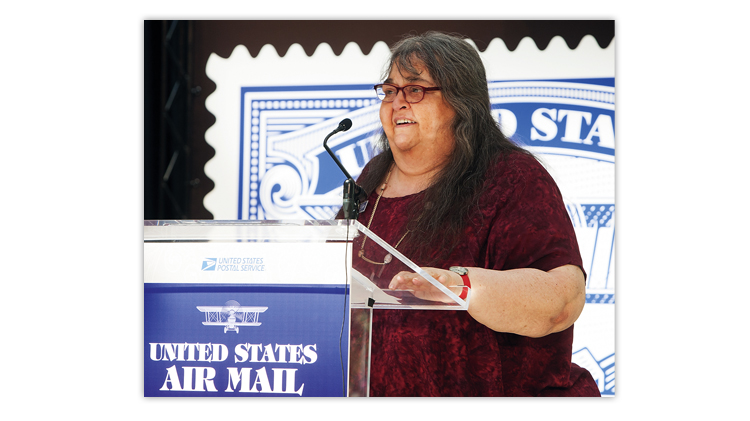 National Postal Museum historian Nancy A. Pope died Aug. 30 in Burnsville, Md. She was the museum’s founding historian and a Smithsonian employee since 1984.

Nancy A. Pope, a historian who delighted visitors to the National Postal Museum with stories that blended little-known tales about stamps and postal history, died Aug. 30 at Oak Manor Healthcare Center in Burnsville, Md. She was 62 years old.

Ms. Pope was the founding historian of the Washington, D.C., museum and a Smithsonian employee since 1984.

“Nancy Pope was the National Postal Museum’s pre-eminent expert on postal history,” said Elliot Gruber, executive director of the museum. “The legacy she has left to the museum, the Smithsonian Institution and her colleagues will be eternal.”

A native of Pendleton, Ore., Ms. Pope was born Jan. 28, 1957. She decided at an early age she wanted to work at the Smithsonian Institution, the museum said.

She achieved her goal when she was hired as a museum technician at the National Museum of American History.

When the postal museum was opened in 1993, Ms. Pope played a key role, researching and writing for its 21 original exhibitions, seven films and many digital assets.

The museum said her exhibits touched on her primary areas of interest: labor and technology, and transportation and mail processing,

Her talks showed how she deftly married historical materials with the reality of daily life.

When talking about the nation’s first airmail pilots, Ms. Pope said: “Some pilots were goofy, some serious, but all understood the bargain they had made risking their lives to get the mail through.” She gave her remarks at the May 1, 2018, first-day ceremony for the United States nondenominated (50¢) blue Airmail Centennial commemorative stamp (Scott 5281).

“The astronauts of their age, they braved storms and equipment failure,” Ms. Pope said, displaying her knack for blending postal history with the lives of her audience.

Her greatest joy was working at the Smithsonian museums, she said, giving the public glimpses of the amazing postal service the nation had created.

The museum gave her credit for collecting the handcuffs placed on Unabomber Ted Kaczynski when he was captured April 3, 1996, in Montana.

Ms. Pope also supervised the collection of materials from the Church Street Station post office in New York City after the Sept. 11, 2001, terrorist attacks. She also obtained the mail collection box from Princeton, N.J., in which anthrax-laced letters were mailed in 2001 to members of Congress.

Those items now reside in the museum’s permanent collection.

Ms. Pope led the team that created the museum’s website in 2002.

“Nancy’s expertise, sharp wit and boundless passion for her work will be missed by many,” the museum said.