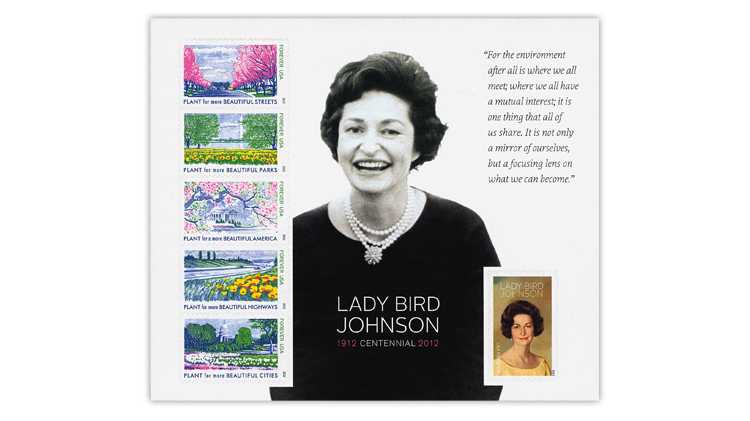 In a surprise June 1 announcement, the United States Postal Service revealed that it will issue a commemorative forever stamp in honor of former first lady Nancy Reagan. Lady Bird Johnson is the most recent first lady to appear on a U.S. stamp. Shown is the 2012 souvenir sheet that pictures Johnson on one of the six stamps.

The United States Postal Service announced June 1 that it plans to issue a commemorative forever stamp in honor of Nancy Reagan (1921-2016), who was the wife of Ronald Reagan, the 40th president of the United States, and served as first lady during her husband’s administration from 1981 to 1989.

“The First Lady will be joined by Postmaster General and Chief Executive Officer Louis DeJoy, Chairman of the Board of Trustees of The Ronald Reagan Presidential Foundation and Institute Fred Ryan, and Mrs. Reagan’s niece, Anne Peterson,” the USPS said.

According to a registration form on the Postal Service’s website, a first-day ceremony for the Nancy Reagan stamp is scheduled for July 6 at 11 a.m. Pacific Daylight Time at the Ronald Reagan Presidential Library and Museum, 40 Presidential Drive, Simi Valley, Calif.

“Her husband’s most trusted advisor and champion, [Nancy Reagan] was an important part of one of the most pivotal presidencies of the 20th century,” the form states.