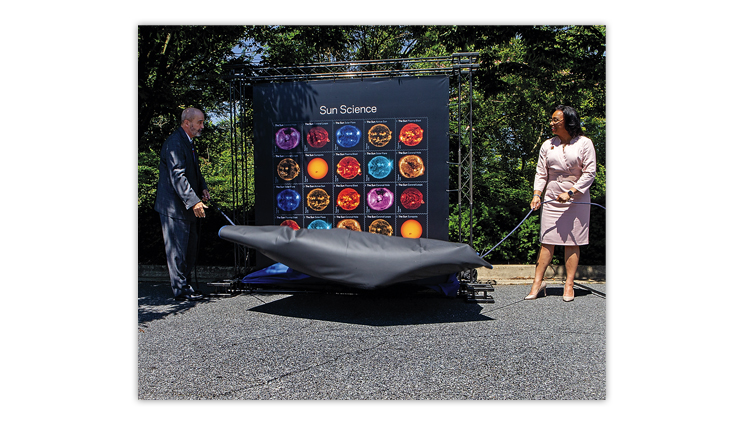 United States Postal Service officials say they believed that the National Aeronautics and Space Administration (NASA) was excited about the set of Sun Science forever stamps.

When it appeared that the June 18 first-day unveiling would be too crowded to hold in the Goddard Space Flight Center’s visitor center, NASA agreed to stage it in a larger auditorium.

But a day before the ceremony, President Joe Biden signed legislation creating a new Juneteenth holiday. And with that plans for the ceremony suddenly fell apart.

The new law meant Friday became a day off for many federal workers.

NASA’s Goddard Space Flight Center decided to close, telling USPS the afternoon before the ceremony, “Sorry but we cannot host the first-day ceremony.”

The Postal Service had already printed and postmarked first-day programs and envelopes with a “Greenbelt, Maryland” postmark.

So began a frantic scramble within the Postal Service to find a new location to meet its commitment to release the stamps nationally, long planned for June 18.

Postal Service officials settled on the small parking lot at the nearby Greenbelt post office. But when the officials gathered there for the unveiling, there was one significant no-show.

No one from NASA showed up to express appreciation for the stamps that celebrate the work of its Solar Dynamics Observatory.

“It makes you wonder how much they really wanted these stamps,” one Postal Service official said after the ceremony.

At least one collector at the event was overheard bemoaning NASA’s absence.

A NASA spokesman confirmed to Linn’s Stamp News that the agency’s civil servants were not present at the stamp ceremony “and the event was moved as NASA facilities were not open due to the first observance of the Juneteenth holiday.”

He did not elaborate.

Postal Service general counsel Thomas J. Marshall, who spoke at the event, acknowledged he was a poor substitute for the scientists whose work was being celebrated on the stamps.

Marshall paid tribute to television weather forecaster Veronica Johnson, who presided over the event, saying she represented the scientific community.

For her part, Johnson took credit for the clear blue skies.

“I think I did a pretty good job,” she told the gathering of about 100 people.

Attendance at first-day events in the Washington, D.C., area is usually much larger.

But the Postal Service had to use emails to alert the public the previous evening of the change in location.

NASA previously had warned the public that children would not be allowed in the auditorium because of fear of spreading COVID-19.

Only one child was spotted in the audience during the event which lasted less than 20 minutes.

The ceremony was only the second open to the public first-day event that USPS has held in the past year.

The first was on May 17 at Mount Vernon, Va., where collectors mingled among heritage breeds of animals on George Washington’s Potomac River estate.

The Postal Service did not close its facilities for the Juneteenth holiday, saying it could not quickly change its mail delivery schedules.

Neal Parr, a Burke, Va., collector, was among those upset at NASA.

“I remain upset about what NASA did,” he said, accusing the federal agency of having walked “away from a first day ceremony where they could have assisted in stressing how important this science is.”

The NASA decision to skip the ceremony was “absolutely incredible,” he told Linn’s in an email.

Foster Miller, a collector from Maryland and a former federal worker, said he was not surprised the NASA scientists boycotted the event. It would have violated federal rules for them to appear as official NASA spokesmen without being compensated by NASA for working on a holiday, he said.

Federal workers cannot appear at such events without being paid by the government, Miller said.

He blamed Congress for not having passed the Juneteenth holiday well in advance of the actual holiday.