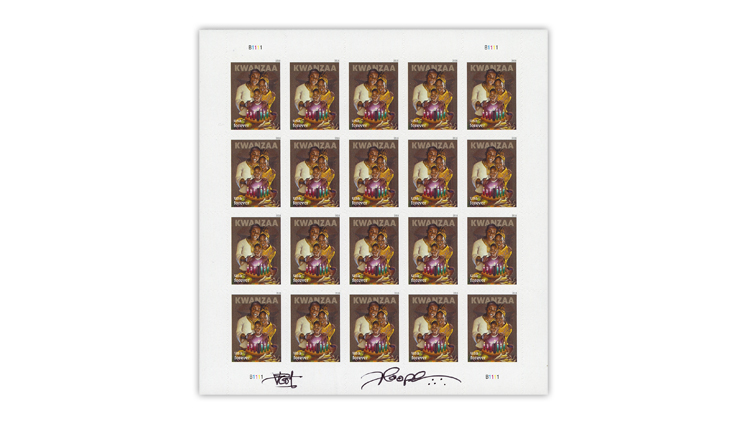 This pane of 2018 Kwanzaa stamps is signed by artist Floyd Cooper and his wife, Velma, who modeled for the woman pictured on the stamp. This Kwanzaa issue is the 77th stamp added to the list of living people shown on U.S. stamps.

With thanks to Jay Bigalke, Linn’s Stamp News editor-in-chief, we have new additions to the list of living people on United States stamps. One of Bigalke’s collecting interests is to obtain autographs of people involved in the production of stamp designs, including artists, photographers and designers.

When he requested an autograph of Floyd Cooper, the designer of the 2018 Kwanzaa stamp (Scott 5337), Cooper responded with two signatures: his own; and that of his wife, who he said had served as the model for the woman featured on the stamp.

I wrote to Cooper and received the signed pane of the stamp shown here. He also sent the following note:

“My wife and I have both signed the pane. Her name is Velma and she is depicted along with her brother, Errol Hyatt, who modeled for the dad. The likeness of the child in the scene is taken from an old photograph of my son Kai when he was much younger. He is now a college student.

“My technique for creating the art for the stamp was my signature style of working, oil erasure. I use erasers to make shapes from a ground of oil paint. I’ve used this technique to make the images in most of the nearly 100 picture books I have made. My website is floydcooper.com.”

This is the 77th stamp on my list of U.S. issues that show photos or reasonable approximations of living people.

There is legislation dating back to 1866 that prohibits the use of images of living people from gracing “bonds, securities, notes, fractional or postal currency of the United States.”

In practice this has been interpreted by the U.S. Post Office Department and U.S. Postal Service to mean that living people cannot be specifically honored on a stamp, but can be pictured as incidental to the purpose of the stamp, or when used as a model for figures in the design.

The guidelines to designers require that the features of these models be changed so they are not recognizable in the final design.

To receive a copy of my listing of living people on U.S. stamps as an email attachment, Linn’s readers can send requests to me, John Hotchner, at jmhstamp@verizon.net.

Requests for a printed copy should be mailed to me at Box 1125, Falls Church, VA 22041-0125, with 25¢ in mint postage and a stamped, addressed business-size return envelope enclosed.

Check out these living writers on stamps