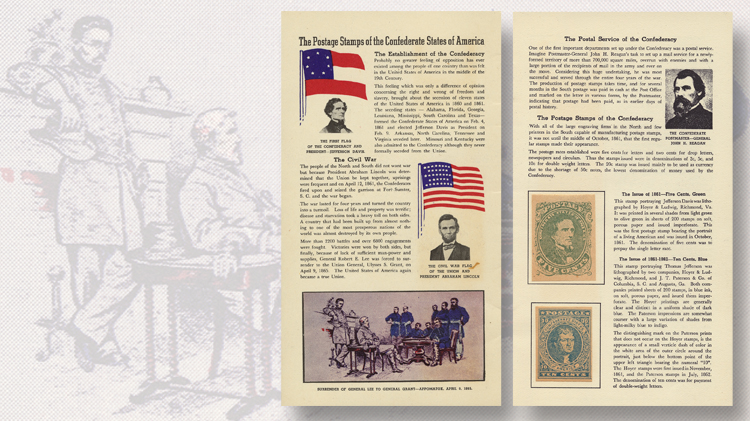 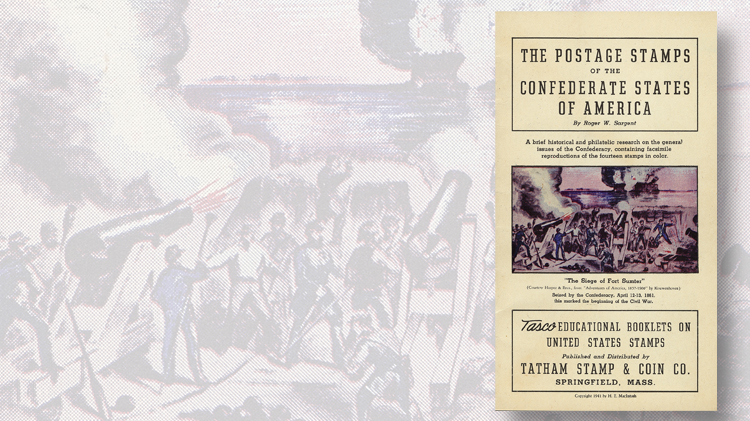 This cover of a TASCO educational booklet may be familiar to United States stamp collectors. These small booklets have been around for almost 70 years.
Previous
Next

If you have been a United States stamp collector for a long time, you have probably run across one or more of the 14 TASCO Educational Booklets produced between 1938 and 1943 by the Tatham Stamp & Coin Co. of Springfield, Mass.

Shown with this column is the booklet “The Postage Stamps of the Confederate States of America,” written by Roger W. Sargent.

According to the inscription below the title, the booklet is “a brief historical and philatelic research on the general issues of the Confederacy, containing facsimile reproductions of the fourteen stamps in color.”

The first two pages of the booklet are pictured here. The first page provides brief historical information, and the second begins a discussion of the postage stamps of the Confederacy.

The second page also includes facsimiles of the first two stamps of the Confederate States: the 1861 5¢ green Jefferson Davis (Scott 1) and the 1861-62 10¢ blue Thomas Jefferson (2).

The information about the TASCO booklets has been dispersed and hard to find, but a recently published hardcover book provides detailed background on the TASCO Confederate stamps booklets and the Confederate facsimiles in them.

The book is titled The Springfield Facsimiles of Confederate Postage Stamps. Written by Steven M. Roth, Francis J. Crown Jr. and Patricia A. Kaufmann, the book was published by the Confederate Stamp Alliance.

It goes into considerable detail on how these most-often seen Confederate facsimiles came to be, how to identify and differentiate them from genuine Confederate States of America issues, and how they were used by various stamp companies as promotions.

The TASCO booklets are given a particularly thorough treatment in the book.

All of this is covered in 116 well-illustrated pages with almost all illustrations in color.

More than just a compilation of facts, the text is a well-written and illuminating window on Confederate philately and on the commercial side of the hobby in the mid- 20th century.

Baum can be contacted for additional information via e-mail.