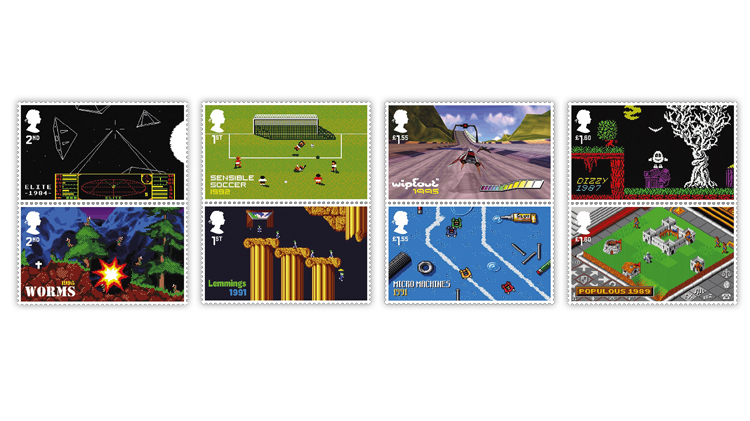 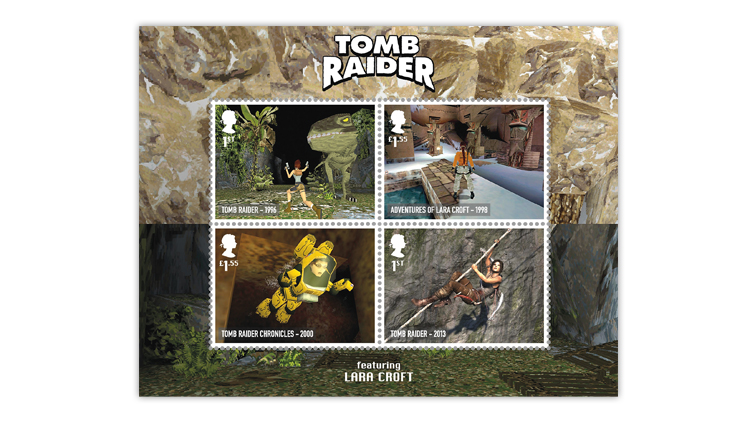 The souvenir sheet of four in Great Britain’s Video Games issue traces the evolution of the Tomb Raider game.
Previous
Next

In announcing the Video Games stamps, Philip Parker of Royal Mail said: “The UK has been at the forefront of the video games industry for decades. In the 1980s and 90s young designers grappled with coding on the new microcomputers and set the template for the industry with iconic games. We celebrate some of their landmark creations on stamps.”

The issue includes eight stamps in four se-tenant (side-by-side) pairs, a souvenir sheet of four stamps showing the evolution of the Tomb Raider video game, and a booklet with two of the Tomb Raider stamps and four Queen Elizabeth II definitives.

According to the Jan. 7 press release announcing the stamps, “Royal Mail worked with industry body, the Association for UK Interactive Entertainment (Ukie), and video game experts, Julian ‘Jaz’ Rignall and Sam Dyer on the stamp issue.”

Video games from 1984 through 1995 are represented on the stamps in the se-tenant pairs. Each stamp depicts an image from the original game, the game’s title, and the year it was launched.

The stamps in the pair of nondenominated second-class stamps show images from Elite, launched in 1984, and Worms, 1995.

A report titled “How British video games became a billion pound industry” on the BBC Teach website said of Elite: “By 1984 British home computer sales were reportedly the highest in the world. And two Cambridge students created one of the biggest hits of the year.

“Experimenting on the BBC Micro, David Braben and Ian Bell wrote space trading game Elite in their spare time, just before their finals. Players journeyed across galaxies trading, defending and upgrading their spaceships. With just 22KB, Elite’s innovative 3D image outlines and open-ended gameplay rewrote the rules of video gaming. It also became the first non-American game to become a US bestseller.”

Royal Mail described Worms as featuring cartoon-style warfare between worms and said that the “series went on to become an international success story, helping Wakefield-based, Team 17, to become a leading international games publisher.”

Sensible Soccer, 1992, and Lemmings, 1991, are shown on the pair of nondenominated first-class stamps.

In a review of the best soccer video games of all time, the TechRadar website said that Sensible Soccer “will always hold a special place in the hearts football fans of a certain age. Coming into its own during the era of the Amiga, it was the first football game that truly felt as though you were playing a tense, tactical game.”

A statue in Dundee, Scotland, features three of the title characters of Lemmings.

The Atlas Obscura website said of Lemmings: “The game, designed by DMA Design and released in 1991, featured anthropomorphized versions of furry rodents being led through several obstacles which they tried to escape. To celebrate this Dundee success story, local artist Alyson Conway created the statue of the lemmings trying to scale a stone pillar in Seabraes Park in 2013.”

Developed by Sony’s Psygnosis Studio in Liverpool, “WipeOut was a revolutionary futuristic racing game for the new PlayStation that became a cult hit,” according to Royal Mail.

Micro Machines was developed by Codemasters. The Guardian article by Simon Parkin, Rich Stanton and Keith Stuart said that “the game allowed children to bring their toy car races to vivid life, where every table edge becomes a cliff-top drop, every paperclip a hazard on the track.”

The £1.60 pair features two 1980s video games: Dizzy, created by the Oliver Twins in 1987 and published by Codemasters. and Populous, created by Bullfrog Productions in 1989.

Royal Mail described the main character of Dizzy as “an adventuring egg that runs and tumbles around a fantasy world solving puzzles by collecting interesting objects.”

“Players took on the power and responsibility of a deity, making moral choices to shape landscapes, inflict disasters and gain civilian followers,” the report said.

This action-adventure game starring British archaeologist Lara Croft was developed by Core Design and released in 1996. Since then, the Tomb Raider franchise has sold more than 74 million copies worldwide and been transformed into three films.

Starting in the upper left, the first stamp (nondenominated first-class) in the sheet shows Croft encountering a dinosaur as she searches for the Atlantean scion in the original Tomb Raider of 1996.

In the design of the second stamp (£1.55), she is searching for the ora dagger in the 1998 Tomb Raider III video game.

Croft’s quest for the philosopher’s stone takes her on a deep-sea dive off the coast of Russia in Tomb Raider Chronicles, published in 2000, as shown on the third stamp (£1.55).

The 2013 version of Tomb Raider, represented on the fourth stamp (nondenominated first-class) in the souvenir sheet, is considered a reboot, telling the story of Croft on her first expedition.

Royal Mail calls the pane of 10 stamps and 10 labels a “collector sheet.” The 10 stamps bear the same designs and denominations as those in the Tomb Raider souvenir sheet, and the labels and selvage show additional scenes from the video game series.