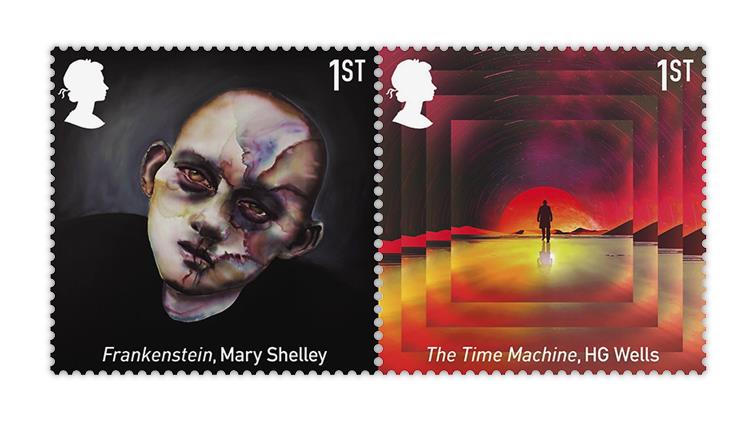 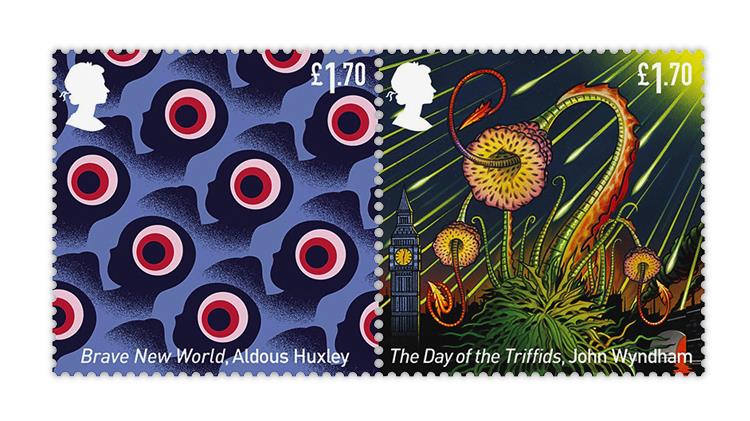 The two £1.70 stamps in Great Britain’s Classic Science Fiction set feature Brave New World by Aldous Huxley and The Day of the Triffids by John Wyndham. 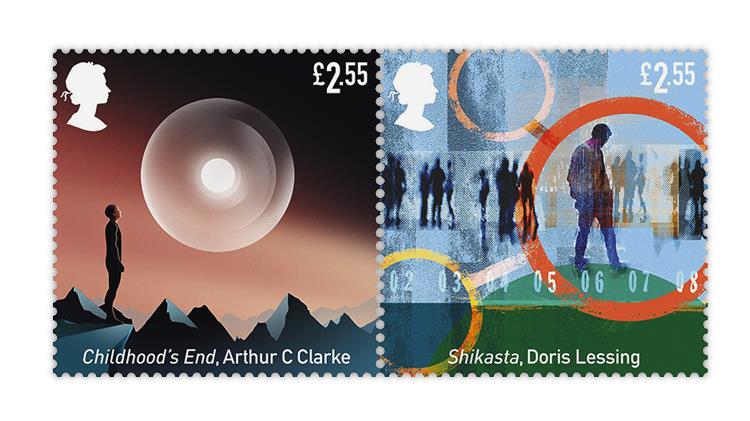 Illustrations representing Childhood’s End by Arthur C. Clarke and Shikasta by Doris Lessing are shown on the £2.55 stamps in the Classic Science Fiction issue.
Previous
Next

In its press release, Royal Mail said, “Britain has been at the forefront of science fiction writing, and the writers whose work is featured on the stamps are household names the world over.”

The writers and their works honored are Mary Shelley’s Frankenstein and H.G. Wells’ The Time Machine on the pair of nondenominated first-class stamps; Aldous Huxley’s Brave New World and John Wyndham’s The Day of the Triffids on the two £1.70 stamps; and Arthur C. Clarke’s Childhood’s End and Doris Lessing’s Shikasta on the £2.55 stamps.

According to the British Library, “The Time Machine (1895) was the first of his hugely popular and prescient ‘scientific romances’ which foresaw the splitting of the atom, travel to the moon and aerial warfare.”

The first-class stamp honoring Wells and The Time Machine was illustrated by Francisco Rodriguez.

Wells also is remembered for his many other classic works, especially The War of the Worlds, first published as a novel in 1898 and famously broadcast by Orson Welles on Halloween night in 1938.

Illustrations of the two aforementioned novels by Wells were also pictured on stamps in Great Britain’s 1995 set of four commemorating the author and his science fiction works (Scott 1616-1619).

Likewise, Frankenstein’s monster is making a return appearance on a British stamp. The new stamp shows Sabina Sinko’s illustration of this fictional creature. He previously was depicted on a 1997 stamp (Scott 1755) in a Stories and Legends set of four, and as a movie monster on a 2008 stamp showing a poster for the 1957 British horror film The Curse of Frankenstein (2584).

An article on the BBC’s Culture website explains the circumstances that led to this early science fiction novel: “One night during the strangely cool and wet summer of 1816, a group of friends gathered in the Villa Diodati on the shores of Lake Geneva. ‘We will each write a ghost story,’ Lord Byron announced to the others, who included Byron’s doctor John Polidori, Percy Shelley and the 18-year-old Mary Wollstonecraft Godwin.

“ ‘I busied myself to think of a story,’ Mary wrote. ‘One which would speak to the mysterious fears of our nature and awaken thrilling horror.’ Her tale became a novel, published two years later as ‘Frankenstein, or The Modern Prometheus’, the story of a young natural philosophy student, who, burning with crazed ambition, brings a body to life but rejects his horrifying ‘creature’ in fear and disgust.”

John Wyndham Parkes Lucas Beynon Harris (1903–69) who wrote under the pen name John Wyndham, as well as other pen names, wrote post-apocalyptic fiction that “captured the anxious and diminished state of England after 1945,” according to Royal Mail.

His 1951 novel The Day of the Triffids is summarized on the Penguin Random House website: “Bill Masen, bandages over his wounded eyes, misses the most spectacular meteorite shower England has ever seen. Removing his bandages the next morning, he finds masses of sightless people wandering the city. He soon meets Josella, another lucky person who has retained her sight, and together they leave the city, aware that the safe, familiar world they knew a mere twenty-four hours before is gone forever.

“But to survive in this post-apocalyptic world, one must survive the Triffids, strange plants that years before began appearing all over the world. The Triffids can grow to over seven feet tall, pull their roots from the ground to walk, and kill a man with one quick lash of their poisonous stingers. With society in shambles, they are now poised to prey on humankind. Wyndham chillingly anticipates bio-warfare and mass destruction, fifty years before their realization, in this prescient account of Cold War paranoia.”

The illustration by Mick Brownfield on the £1.70 stamp features these murderous plants and also shows the Houses of Parliament and Elizabeth Tower, commonly called Big Ben.

The stamp in the £1.70 pair shows Thomas Danthony’s illustration for Brave New World, the most famous of the more than 40 books (both fiction and nonfiction) written by Aldous Huxley (1894–1963).

Published in 1932, Brave New World is considered one of the best novels of the 20th century. It ranks No. 5 on the Modern Library’s list of top 100 novels published after 1900.

On its website, the Modern Library said: “Though Brave New World is less famous than George Orwell’s 1984, it arguably presents a world that more closely resembles our own: a world of easy sex, readily available and mood-altering pharmaceuticals, information overload, and mass production.”

Huxley moved to the United States in 1937, where he continued to write novels as well as screenplays.

A prolific writer, Arthur C. Clarke (1917–2008) authored more than 100 books and hundreds of articles and short stories. Published in 1953, Childhood’s End, a tale of an alien invasion of Earth by the Overlords, was his fifth novel.

Matt Murphy’s illustration representing this novel appears on the first stamp in the £2.55 pair.

In an obituary for The New York Times (March 18, 2008), Gerald Jonas recapped some of Clarke’s other contributions: “From his detailed forecast of telecommunications satellites in 1945, more than a decade before the first orbital rocket flight, to his co-creation, with the director Stanley Kubrick, of the classic science fiction film ‘2001: A Space Odyssey,’ Mr. Clarke was both prophet and promoter of the idea that humanity’s destiny lay beyond the confines of Earth.”

The final stamp shows Sarah Jones’s illustration for Shikasta: Re: Colonised Planet 5, often called Shikasta, by Doris Lessing (1919–2013). Published in 1979, it the first of five books in her Canopus in Argos series.

Royal Mail said: “A hugely versatile novelist, Lessing turned to science fiction in the 1970s to explore questions of gender, colonisation and power. Women have always been involved in science fiction, but Lessing’s generation gave the genre new avenues of social criticism.”

International Security Printers printed the stamps by lithography in sheets of 60 (sold in panes of 30 at most postal outlets). The stamps are square, 34.7 millimeters by 34.7mm, and are perforated gauge 14.5.

In conjunction with the Classic Science Fiction issue, Royal Mail is offering postmarks, a first-day cover, six postcards reproducing the designs of the stamps, and a presentation pack. The pack includes the stamps, illustrations, and text by Roger Luckhurst, a British writer and academic.