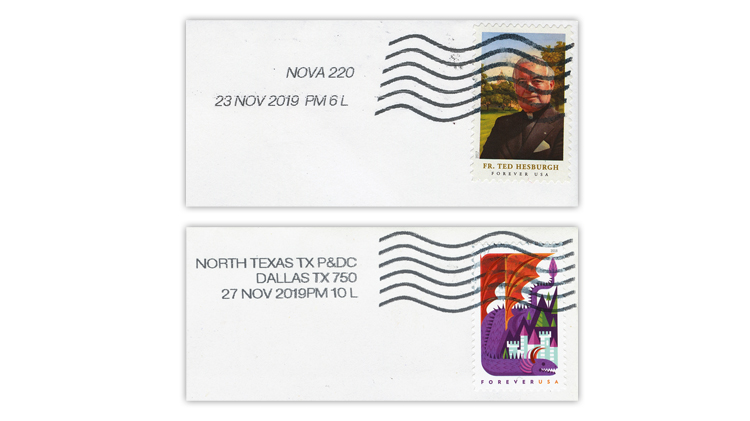 Something promising seems to be afoot at two of the United States Postal Service’s mail-processing centers. They appear to be testing a new sprayed-on postmark with improved legibility.

In late November 2019, two envelopes hit my desk with sprayed-on postmarks that were much clearer than normal, with a fine dot pattern used. The postmark from “NOVA,” the mail-processing plant in northern Virginia, has a slight right-leaning slant to the text. In the example from the “North Texas TX P&DC” (the Dallas area), the text is straight.

Both examples have wavy bars that look more like the old machine die-hub cancels than the commonly seen sprayed-on markings of today.

I haven’t found postmarks from these locations with the “Happy Holidays” message and Christmas wreath design, so I don’t know if pictorial designs used for the holidays or special marketing messages are legible.

Many of the wreath postmarks and other recent pictorial markings have been very difficult to read, to say the least.

I have had several conversations with postal officials about postmark legibility, and I hope that we will soon see some changes nationwide that improve the look of postmarks in the United States.

Happy Holidays postmark in use through Jan. 4