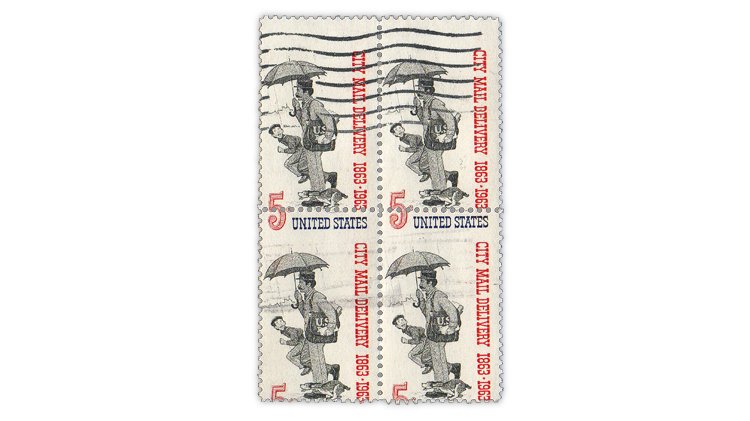 The top two stamps in this block of four United States 1963 5¢ City Mail Delivery stamps are missing the dark blue “UNITED STATES” inscription due to a perforation shift. A collector from California discovered the new error in late July while searching for stamps for his China collection on the eBay internet commerce site.

A heretofore unreported color-missing error of the United States 1963 5¢ City Mail Delivery stamp (Scott 1238) was discovered among various listings for China on the eBay internet commerce site in late July.

The error occurs in a used block of four that collector Tom Massa of Oxnard, Calif., purchased from an eBay seller for $40.

The two error stamps in the block that are missing the dark blue are from the top row of the original pane of 50 because a “UNITED STATES” inscription does not appear at the top of the stamps.

Massa told Linn’s Sept. 21 that he was searching the China listings on eBay for items for his collection when he spied the odd-looking and out-of-place 5¢ City Mail Delivery block.

“If the block had been with the U.S. listings, I probably wouldn’t have seen it,” Massa said.

“The lot opened at $11. On the last day of the auction or shortly before, the seller added a ‘make an offer’ option. I offered $40, and he accepted.”

Massa said he would like to sell the error block at some point, but he wants to learn more about it before doing so. A Linn’s editor suggested that he contact the Errors, Freaks and Oddities Collectors’ Club for more information.

The former are described as “stamps where a missing color is caused by the complete failure of the printing plate to deliver ink to the stamp paper or any other paper,” while the latter are “stamps where a color or colors were printed somewhere but do not appear on the finished stamp.”

Four types of color-missing errors are listed in the Scott U.S. Specialized catalog: foldover, extraneous paper, color misregistration and perforation shift. These are abbreviated FO, EP, CM and PS, respectively, in the listings.

Vol. 1A of the 2023 Scott Standard catalog is scheduled for publication in April 2022.