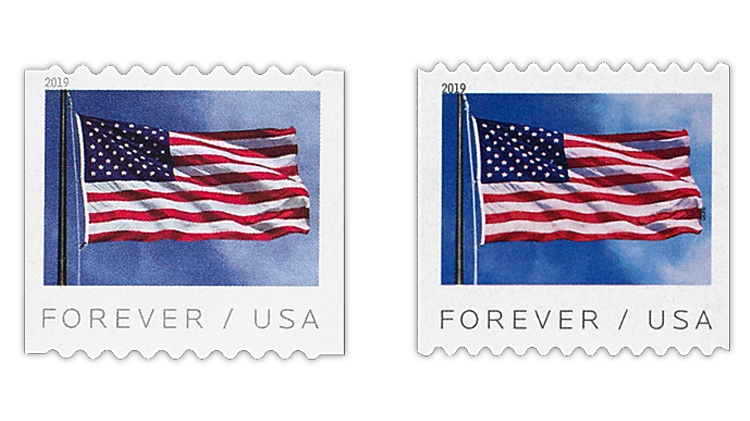 Two new plate numbers, P2222 and B2222, have been reported for the United States 2019 Flag coil stamps printed by Ashton Potter and Banknote Corporation of America, respectively. The new plate numbers are the result of new printings ordered by the U.S. Po

Both Flag coils were produced in rolls of 100 for sale at post offices.

On the rolls of the two coil stamps, the plate number is printed on every 31st stamp, centered along and reading up the right edge next to the flag design. The initial printings include plate numbers P1111 and B1111.

Linn’s learned about the BCA-printed Flag coil with the new B2222 plate number from a report in the March issue of Coil Line, the official journal of the Plate Number Coil Collectors Club.

The Coil Line report said that Flag coil stamps bearing the B2222 plate number were found Jan. 15 “at a small post office in North Carolina.”

Betts explained that a second printing of both coils was ordered because the first-class letter rate (currently 55¢) did not increase in January 2020.

“We had the printers change the plate number for the reprints,” Betts said.

The second Flag coil printing from Ashton Potter also involved a change in the self-adhesive paper stock: from paper supplied by UPM Raflatac for the first printing, to Fasson paper supplied by Avery Dennison for the second, according to Betts.

Both printings of the BCA Flag coil were on Raflatac paper, Betts said.

Betts also said that the USPS could not confirm if Ashton Potter has shipped any Flag coils with plate number P2222.

Absent a plate number, the two Flag coils may be easily distinguished by examining the shape of the serpentine die cuts.