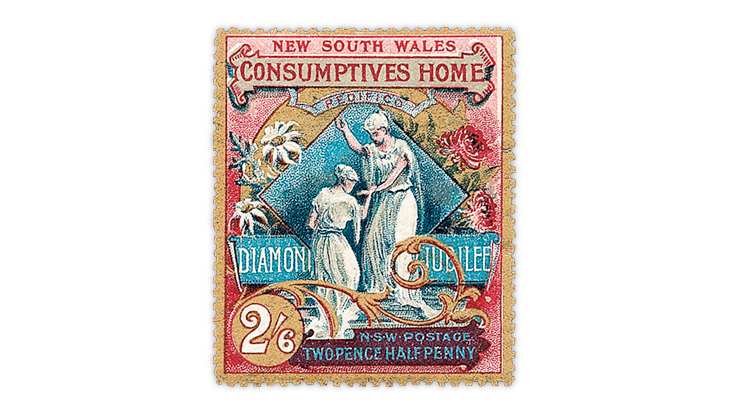 The Australian colony of New South Wales issued the world’s first semipostal stamps (Scott B1-B2) in June 1897. The stamps have some of the most ornate designs of any stamps ever issued.

New South Wales, today an Australian state, lies on the east coast of Australia, south of Queensland, north of Victoria and east of South Australia. The capital is Sydney.

The colony was founded by the First Fleet, which arrived from Great Britain in 1788.

New South Wales issued its first stamp Jan. 1, 1850. After Australian federation in 1901, New South Wales continued to issue its own stamps through 1907, and they remained in use until 1913.

Sometimes called charity stamps, semipostal stamps sell for more than their postage value with the difference between the postage value and the sale price usually being donated to a charity or other public concern.

The 1897 New South Wales semipostals (Scott B1-B2) commemorated the diamond jubilee of Queen Victoria and raised money to support a home for consumptives (people with tuberculosis).

These semipostals have some of the most ornate designs of any stamps ever issued. The design of the 1-penny+1-shilling stamp depicts a winged angel ministering to a patient. The design of the 2½d+2sh6d stamp shows an allegory of charity with two female figures dressed in white.

Examples in mint never-hinged condition are scarce and are a good buy at 80 percent to 100 percent of Scott catalog value.