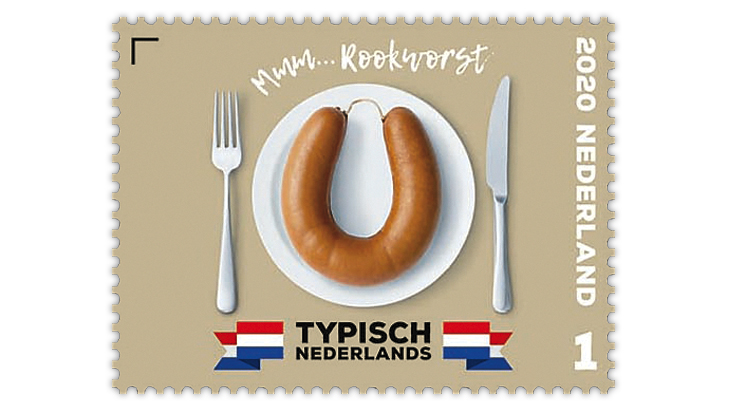 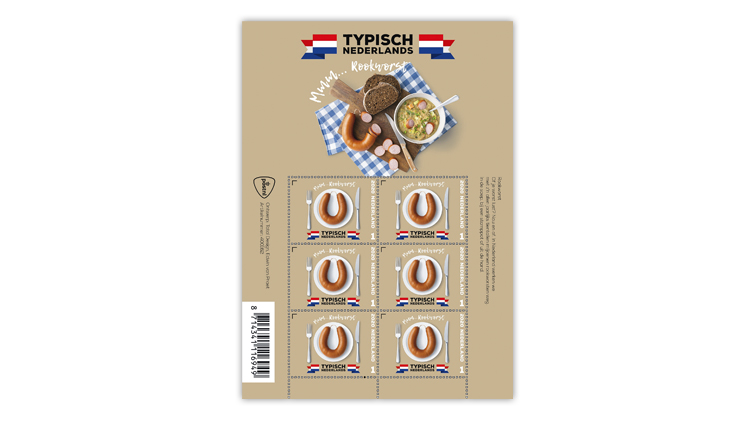 The Netherlands issued the Rookworst stamp Jan. 2 in a pane of six. The phrase “Mmm … rookworst” appears on the stamp and in the selvage of the pane. 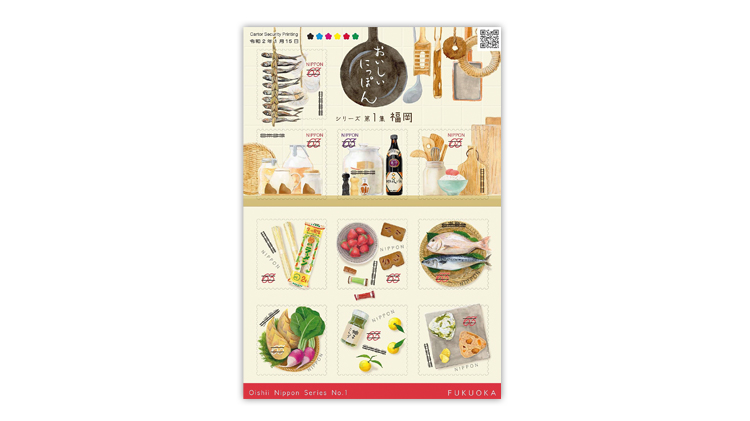 Japan highlights regional cuisine in a new series called Delicious Japan. Issued Jan. 15, the first set in the series focuses on the food of Fukuoka. 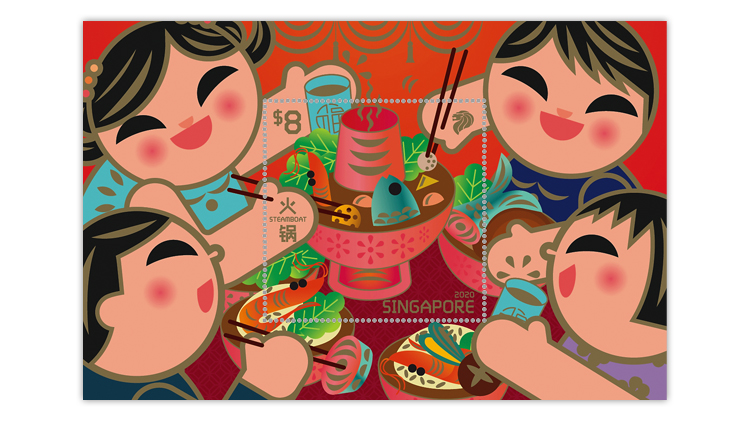 A souvenir sheet from Singapore shows a family sharing a hot pot during a reunion dinner, one of the traditions associated with the Lunar New Year. 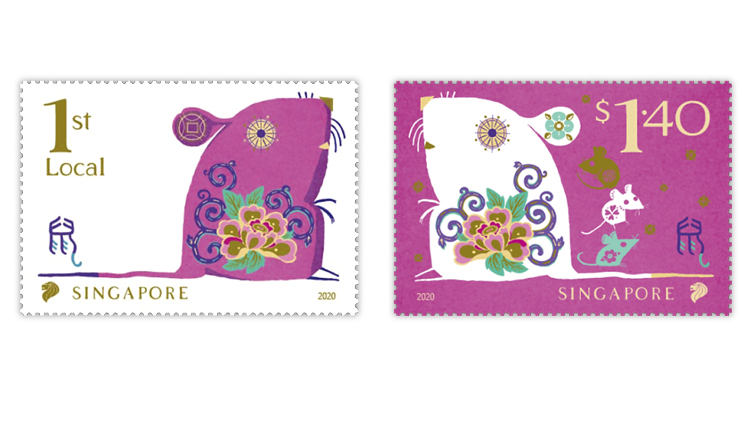 Singapore issued two stamps Jan. 8 celebrating the Year of the Rat.
Previous
Next

A new series of stamps from the Netherlands features food that is typical of that country.

The TasteAtlas website, which describes itself as an encyclopedia of flavors, said: “Rookworst is a Dutch smoked sausage made with either pork, pork and beef, or pork and veal, but in recent years there’s also a turkey-based rookworst that’s available in most Dutch stores. The meat is typically flavored with saltpeter, nutmeg, and sugar before it is placed into pork intestines and left to smoke over smouldering woodchips.”

The nondenominated, domestic-rate stamp (currently €0.91) depicts the sausage on a plain white plate with a fork on one side and a knife on the other. Above the plate is “Mmm … Rookworst” in a cursive font and below it is the logo for the series: two folded Dutch banners on either side of the inscription “Typisch Nederlands.”

The stamp is sold in a pane of six, which includes the logo and “Mmm … Rookworst” in the selvage above the stamps. A photograph in the selvage shows rookworst, brown bread and a bowl of pea soup on a cutting board sitting on top of a checked blue and white tablecloth.

The 63y stamps are square, and many of the designs present ingredients typically found in a Fukuoka kitchen, including a bottle of soy sauce, a package of ramen noodles and raw vegetables.

The 10 84y stamps are round. Among the prepared dishes displayed on these stamps is Hakata, or tonkotsu, ramen, one of the city’s specialty dishes, according to the Wow! Japan tourist website, which said, “If you talk about ramen in Fukuoka, no other ramen would come to mind than tonkotsu ramen, which is characterized by its milk-white soup made with pork bones and its fine noodles.”

Another stamp depicts ozoni, or zoni, a soup traditionally consumed on New Year’s Day in Japan.

Singapore welcomed the Year of the Rat with two stamps issued in separate panes of 10 Jan. 8 and a souvenir sheet of one issued Jan. 24, the eve of the Lunar New Year.

The souvenir sheet shows a family sharing a reunion dinner.

In describing this sheet, Singapore Post said: “Chinese New Year or Lunar New Year is one of the most important festivals among the Chinese community in Singapore. On the eve of Chinese New Year, family members will return home for a reunion dinner —an annual feast and significant tradition to reaffirm love and togetherness with one another.”

Depicted on the $8 stamp in the center of the souvenir sheet is a hot pot, a stew of fish and vegetables.

Singapore Post said: “Family members will gather around a hot pot of bubbling broth filled with delicious ingredients, and everyone from young to old will enjoy the sumptuous dinner in a joyful spirit. The simmering steamboat represents more than just good food, as the gathering over the feast is also a symbolic way to strengthen family bonding, sharing happiness with one another and wishes for a bountiful year ahead.”

Andy Koh designed the souvenir sheet, and Cartor printed it by offset.

Lim An-Ling, an animator and illustrator, designed the two Year of the Rat stamps. The nondenominated domestic-rate (30¢) stamp shows a symbolic pink rat on a white background, and the $1.40 stamp features a white rat on a pink background.

Southern Colour Print of New Zealand printed these stamps. The nondenominated stamp was also issued as a self-adhesive in a booklet of 10.