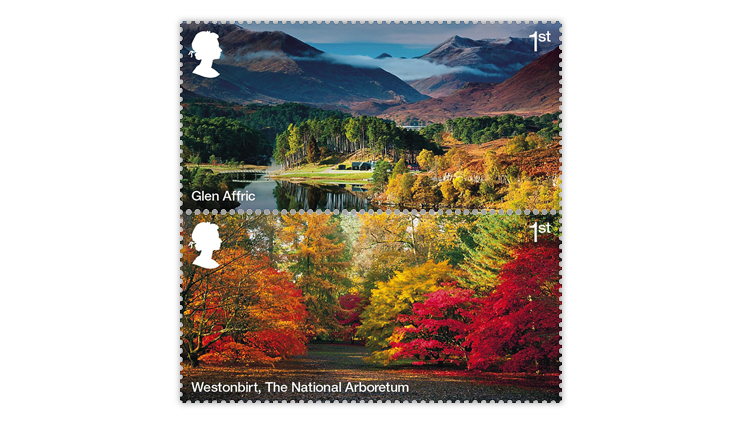 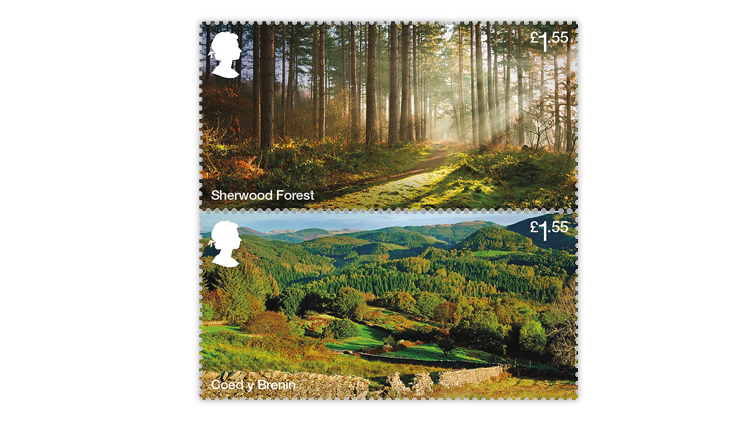 Sherwood Forest, of Robin Hood fame, is shown on the top stamp in the £1.55 pair in Great Britain’s Forest issue. The bottom stamp depicts Coed y Brenin in Wales. 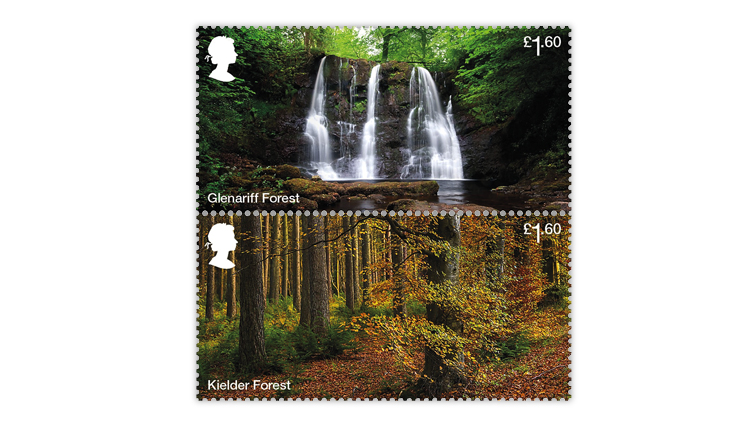 The pair of £1.60 stamps pictures Glenariff Forest in Northern Ireland and the man-made Kielder Forest in England.
Previous
Next

The Forests stamp set coincides with the 100th anniversary of the Forestry Commission, created in September 1919 under the Forestry Act to restore the nation’s woods and forests after World War I.

The government of the United Kingdom’s website describes the Forestry Commission as the “government department responsible for protecting, expanding and promoting the sustainable management of woodlands.”

The stamps reproduce photographs that Royal Mail describes as capturing the character and varied colors of public woodlands in the four countries of the United Kingdom and in the national arboretum.

The top stamp in the vertical pair of nondenominated first-class stamps shows a mountain scene at Glen Affric, Inverness-shire in the Scottish Highlands.

Forestry and Land Scotland, the Scottish government agency responsible for managing national forests and land, calls Glen Affric one of the most beautiful places in Scotland, adding that “It’s a classic landscape of perfectly-placed lochs, mountains and a wonderful mix of pine, birch and oak trees.”

The other nondenominated first-class stamp features an autumn scene at Acer Glade in Westonbirt, the National Arboretum, Gloucestershire, England.

Started more than 200 years ago by Robert Stayner Holford (1808–1892), the arboretum contains 2,500 species of trees from around the world. Japanese maples are shown on the stamp.

Thanks to the Robin Hood legend, Sherwood Forest in Nottinghamshire is probably England’s most well-known forest, with more than 350,000 people visiting the royal forest each year. It is represented on one of the two £1.55 stamps.

In a press release announcing the stamps, Forestry England, which works with the Forestry Commission, said: “Sherwood Forest in Nottinghamshire is famous for its rich assemblage of ancient oak trees, notably the Major Oak, arguably Britain’s most famous tree. The atmospheric image on the stamp, however, shows a fine stand of conifers, well illustrating the fact that broadleaf trees and conifers both have a place in this celebrated forest.”

Illustrated on a £1.60 stamp is one of the three waterfalls along Waterfall Walk at Glenariff Forest, County Antrim, Northern Ireland.

“Situated among the world famous Glens of Antrim, Glenariff — Queen of the Glens — is considered to be the most beautiful of the nine Antrim Glens.”

The other £1.60 stamp shows the United Kingdom’s largest man-made forest, Kielder Forest in Northumberland, England. According to Forestry England, the forest stretches 250 square miles, 75 percent of which is covered by trees.

The firm Up designed the stamps, using stock photographs taken by different photographers.

International Security Printers printed the stamps by lithography in three sheets of 60 (sold in panes of 30 at most postal outlets). Each stamp is 60 millimeters by 30mm and perforated gauge 14.5.

In addition to the stamps, Royal Mail is offering first-day covers, six postcards reproducing the designs of the stamps, and a presentation pack. The presentation pack includes the six stamps along with an overview of forests through the ages and information about the six forests featured on the stamps.