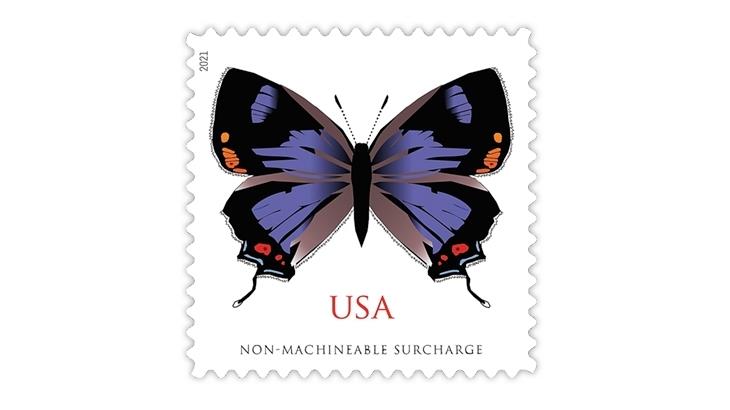 The new Colorado Hairstreak Butterfly stamp for nonmachineable domestic letter mail will be issued March 9. It is the eighth stamp in the Butterfly series. 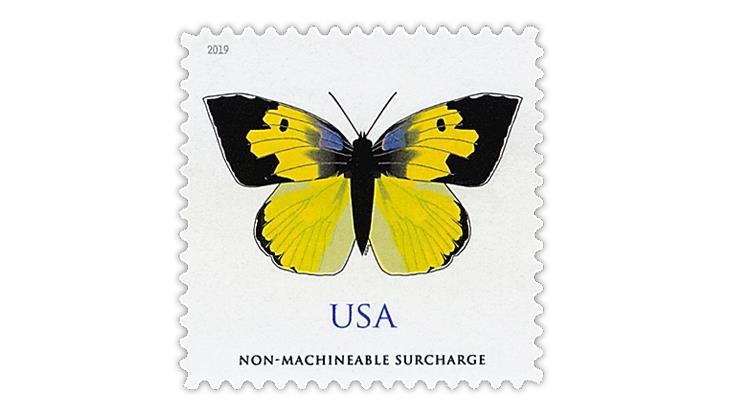 The previous issue in the U.S. Butterfly stamp series, the nondenominated California Dogface Butterfly stamp, was placed on sale Jan. 27, 2019, with a postage value of 70¢ when issued.
Previous
Next

The small but vibrant Colorado hairstreak butterfly is featured on a new United States stamp to fulfill the nonmachineable surcharge rate for first-class mail.

The nondenominated stamp will sell for 75¢, reflecting the 5¢ increase in the rate that went into effect Jan. 24. Formerly 15¢, the surcharge is now 20¢, which is added to the regular first-class mail rate of 55¢.

The intended use of the nonmachineable surcharge rate stamp is to pay postage on any first-class domestic mailpiece that fails to meet designated sizing standards for first-class letters. One frequently cited example is the square greeting card envelope.

An envelope is considered nonmachineable if its aspect ratio (length divided by height) is less than 1.3 or more than 2.5. The aspect ratio of a square envelope, for example, is 1.

When the Butterfly stamp series was introduced in 2010, some greeting card manufacturers imprinted a butterfly silhouette in the stamp corner of any square envelope as a signal that the Butterfly nonmachineable surcharge rate stamp was needed to properly mail the card.

Another example when the surcharge is applied is when the envelope “contains items such as pens, pencils, keys, or coins that cause the thickness of the mailpiece to be uneven.”

The full description of nonmachineable first-class mail characteristics is found in the U.S. Postal Service’s Domestic Mail Manual in section 101.1.2.

The Postal Service has planned an online, or virtual, first-day ceremony for the new stamp to take place March 9 at 11:30 a.m. Eastern Time on the USPS Facebook and Twitter pages. Additional details about the event are published on the USPS website.

For previous ceremonies, the Postal Service has retained video of the event on those platforms so that they can be viewed after the fact.

New stamps in the series are commonly issued when the nonmachineable surcharge rate changes, as it did in January this year, or soon thereafter.

The first four stamps in the series were printed by gravure, and the next four, including the new stamp, have been lithographed.

Like all of the stamps in the series so far, the new Colorado Hairstreak Butterfly stamp was designed by USPS art director Derry Noyes using artwork by Tom Engeman, and it is being issued in panes of 20.

“The stamp art was digitally created using images of preserved butterflies as a starting point,” according to the Postal Service. “The result is a highly stylized, simplified image of a Colorado hairstreak rather than an exact replica.”

The stamp includes the inscription “USA” in red below the butterfly illustration, and “NON-MACHINEABLE SURCHARGE” in a gray single line across the bottom of the design. A small year date 2021 is positioned reading up near the upper left corner, according to an image of the stamp design revealed by the Postal Service.

Along with the stamps in the Butterfly series, Engeman also illustrated the 60 stamps in the 2008-12 Flags of our Nation coil stamp series (Scott 4273-4332).

The state of Colorado named the Colorado hairstreak butterfly as its state insect in 1996.

From the family lycaenidae, the gossamer-winged butterfly is identified by the scientific name Hypaurotis crysalus.

“The butterfly is two inches in width and has purple wings with black borders, orange accents in the corners and blue on the underside,” according to the state. “It may be found on both sides of the Continental Divide at elevations of 6,500 to 7,500 feet, in its usual habitat of scrub oak ecosystems.”

This particular butterfly species is not attracted to flowers, according to the Postal Service. Instead, it perches in oak trees, sipping sap and raindrops.

It is one of some 100 hairstreak butterfly species.

The Postal Service has not announced plans for pictorial first-day cancels for the new stamp, and the first-day cover offered on its postal store website shows the stamp canceled with a traditional black four-bar killer with the words “FIRST DAY OF ISSUE” centered between the horizontal cancellation bars.